There is no shortage of repugnant and dangerous ideas in the world. An age old question is whether free speech will see good ideas win out over bad.

The proposition that good ideas eventually triumph in “the marketplace for ideas” dates at least to 1644, when John Milton wrote in his anti-censorship tract Areopagitica:

Let [Truth] and Falsehood grapple; who ever knew Truth put to the worse, in a free and open encounter?

But it was perhaps first explicitly stated by United States Supreme Court Justice Oliver Wendell Holmes in 1919, in his dissent to a 7–2 ruling in the Abrams v United States case involving the first amendment right to freedom of speech.

the ultimate good desired is better reached by free trade in ideas – that the best test of truth is the power of the thought to get itself accepted in the competition of the market.

Old though this question may be, it is one that confronts us time and again. Is it more dangerous to stifle expression of a seemingly dangerous idea, or to let it be freely expressed?

It is central to the controversy over the New York Times publishing on June 3 an idea many found repugnant. 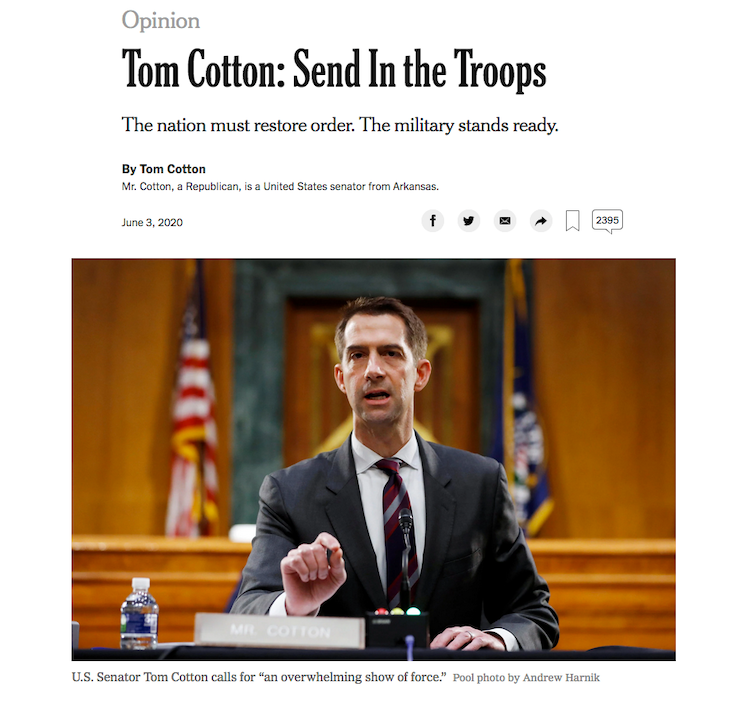 That idea was “an overwhelming show of force to disperse, detain and ultimately deter lawbreakers” as a response to widespread Black Lives Matter demonstrations and isolated outbreaks of violence and looting. It was advocated in an op-ed piece by a US senator from Arkansas, Tom Cotton.

Read more: In publishing Tom Cotton, the New York Times has made a terrible error of judgment

Editorial page editor James Bennet resigned as part of the paper’s mea culpa. A champion of the “marketplace of ideas” might argue the New York Times did the right thing, or at least nothing wrong.

So what would an economist, whose job is to understand market behaviour, say?

The most celebrated result in all of economics – the “First Welfare Theorem” formalised by Nobel laureates Kenneth Arrow and Gerard Debreu – states that with the right conditions competitive markets will allocate resources with maximum efficiency.

Yet economists – especially and including Arrow and Debreu – are all too aware that markets don’t always function well in reality. Information is often “asymmetric”, such as a seller knowing more about a product’s quality than the buyer. There are “externalities”, costs incurred by third parties, such as environmental harms not factored into market prices. Plenty of markets are not sufficiently competitive.

The failure of markets for insurance, used cars and many other things has been well-documented.

Why, then, why should we have faith in the marketplace for ideas?

Ideas are not products

Over the past two decades economists have been developing formal models that can speak to competition in ideas.

With products, sellers compete for customers by setting the price for their products. As the economists Matthew Gentzkow and Jesse Shapiro put it:

Two firms compete [in the product market] if their products are substitutes from the perspective of consumers. A change in the price of one affects the purchasing behaviour of the other’s customers. This kind of competition is important because it limits firms’ ability to raise price above marginal cost.

Ideas differ in the following way:

Two firms compete in [an information market] if 1) they cover the same events and 2) at least some consumers will learn the facts reported by both. A change in the set of facts one reports affects the information of the other’s customers. This kind of competition limits firms’ ability to control consumers’ beliefs.

A form of prisoner’s dilemma

The cleanest formal model of competition between parties trying to control people’s beliefs comes from a 2017 paper by Matthew Gentzkow and Emir Kamenica (a former classmate and University of Chicago colleague of mine).

The “marketplace for ideas” notion holds that when there are more senders of information, more information will be communicated to consumers.

Gentzkow and Kamenica showed this is not necessarily so. It all depends on the nature of the strategic interaction between the senders of information.

Senders might be caught in a kind of Prisoner’s Dilemma, the game theory concept made famous by the movie A Beautiful Mind. It would be socially productive for more information to be revealed, but the private incentives of the senders lead to less revelation.

Read more: The legacy of John Nash and his equilibrium theory

For example, consider two pharmaceuticals makers with drugs only they know the effectiveness of. One half of their market is customers who will only buy pharmaceuticals they believe likely to work well. The other half wants their drugs to work too, but they’ll also buy if it might only partially work.

In this case each maker has an incentive to withhold information about the efficacy of their product, even though they and the consumers would be better off if they and the rival revealed more information. It’s just like the consequences of unilateral action as shown in A Beautiful Mind.

If strategic interaction in the marketplace for ideas takes this form then competition does not lead to good arguments winning out.

Gentzkow and Kamenica show the crucial condition for competition to lead to more information being revealed is this: each sender must be able to unilaterally deviate to some outcome more informative for consumers. In the drug example, this would be each maker disclosing the efficacy of their own drug and that of their competitor.

Whether this happens in practice depends on important details about the nature of the ideas being discussed, what types of information are permissible by law, and of course whether those receiving information are rational.

In short, the answer to whether the marketplace for ideas leads good ideas to win out is: it depends.

Open discussion is not enough

Just because the marketplace for ideas doesn’t always work doesn’t mean it never works. There are deeply important non-economic reasons to value freedom of speech that extend beyond how much information gets revealed.