Bonn 13 years of torture and lawlessness at Guantánamo should be enough for the self-proclaimed flagship democracy. This military camp has made a mockery of the US jurisdiction, which has lost its credibility. For the rest of the world, American democracy is no longer a role model because of its lousy judiciary and its criminal and despicable foreign policy. Wasn't the US founded, inter alia, on the basis of the rule of law? All American children cut their teeth on apple pie and the rule of law. As long as Guantanamo stays open, it's an insult to anybody who respects the rule of law, justice and fairness.

In the name of democracy, freedom, free trade and for the benefits of the 1 percent superrich, Millions of non-white people have been killed. Not to speak of the 4, 500 US soldiers in Iraq and 2,360 US soldiers in Afghanistan who lost their lives for the crackpot idea of fighting terror. Tenth of thousands of maimed servicemen and servicewomen and several thousands of suicides in the military seems to be swept under the table.

In Washington D. C., the founders of "Close Guantánamo", the well-known human rights lawyer Tom Wilmer and the journalist Andy Worthington, discussed together with Col. Morris Davis, the former chief prosecutor of the military commissions at Guantánamo, America's open sore.1 In 2009, President Obama promised to close the military prison within one year. All his efforts, however, were blocked by the US Congress. Public protest forced the Obama administration to deal again with the Guantánamo detainees.

Originally there were 799 prisoners in Guantanamo. Up to 127 all were dismissed without being indicted. Some of the prisoners died or committed suicide. Of the 127, 57 are due for release. 52 of them are Yemenis, but they have not been send to Yemen because of civil unrest in the country. Members of Congress oppose a release on the grounds that the released would re-engage in terrorist attacks. One can ask where the evidence is that they engaged in terrorist attacks in the first place? To date, no former prisoner has done anything wrong. Due to scant evidence, even the kangaroo courts convicted only 6 prisoners in 13 years. 4 out of 6 were convicted for an offence that was later determined not an offence.

There is one British citizen incarcerated at Guantánamo, Shaker Aamer. Although the Brits are America's closes ally and took part in the raid against Iraq, neither Tony Blair nor David Cameron have been able to secure his release, though Aamer has long been cleared for release.

The prison camp at Guantánamo is not only a stain for America but also an international story, because the inmates have been living in a lawless space. International law has been twisted and bent beyond recognition by the legal counselors of the Bush administration. They created a legal vacuum in which everything was permitted, torture included.

Guantánamo remains America's open sore as long as those responsible for torture and the abuse of law are not brought to justice. The remaining inmates should be transferred to a detention facility within the US and brought to trial. If the evidence for an indictment is insufficient, they are to be released immediately. It goes without saying that the detainees must be compensated.

Why not sending Bush, Cheney, Rumsfeld and their cronies instead to Guantanamo? 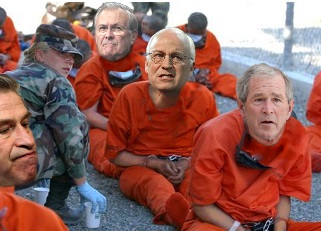