U.S.A. 10 June 2015: We should already know more than enough to be horrified by the state of our American world.  It should disturb us deeply that a government of, by, and for the war-makers, intelligence operatives, bureaucrats, privatizing mercenary corporations, surveillers, torturers, and assassins is thriving in Washington.  As for the people -- that’s us -- in these last years, we largely weren’t there, even as the very idea of a government of, by, and for us bit the dust, and our leaders felt increasingly unconstrained when committing acts of shame in our name. So perhaps the last overlooked anniversary of these years might be the 12th anniversary of American cowardice.  You can choose the exact date yourself; anytime this fall will do.  At that moment, Americans should feel free to celebrate a time when, for our “safety,” and in a state of anger and paralyzing fear, we gave up the democratic ghost.”…..“Among the many truths in that still-to-be-written secret history of our American world would be this: we the people have no idea just how, in these years, we’ve hurt ourselves.” (Tom Ingelhardt, “The 12th Anniversary of American Cowardice What You Don’t Know Can Hurt You.” TomDispatch.com: 3/28/2013).

In a knowledge-based age of reason and accountability, global politics is fast becoming a staged drama. Pretension and exploitation are the hallmarks of the global political leadership. The UNO is already an irrelevant and dysfunctional organization in world affairs. What led to the failure of the international institutions and the emergence of World War I and World 2 appears to be inescapable reality not on screen but in the prevalent human affairs. The liberal democracies have produced typical ‘right man syndrome’ in its worst shape to manage and control the minds of the people. Stereotyping of electoral victories produce egoistic, inept and incompetent leaders who are resourceful but misfit to serve the interests and priorities of the masses. Most use money and media-build image and capacity to win the elections but miserably fail to live upto the moral and intellectual norms and genuine expectations of the common folks. Once in power, the ego transforms into type of a cancer to commit unthinkable crimes against the very people who voted for them. Elections are presumptuous gimmick and do not bring any real political change at the grassroots levels but to recycle the disposable ambitions of the few to occupy political powerhouses. In an age of rising expectations, hopes are dashed away for any futuristic developments to imagine a promising future for the mankind to have peace, con-existence and normalcy across the globe. Most NATO affiliated leaders are quick to blame President Putin and Russian intervention in Eastern Ukraine but deny the facts that America and Britain waged repeated aggressive wars against Iraq and Afghanistan. The decade long occupation killed millions of innocent people and committed crimes against humanity. None seem to discuss it in the Western news media. Those sadistic leaders responsible for the crimes were not held accountable. The current global politics is a game of political distraction, killings, destruction of the human environment and continuing displacement and massacre of innocent people in Iraq, Syria, Afghanistan, Yemen, Libya and other parts of the Arab world.

Wars Negate Peace Except to Incapacitate the Mankind

Cynicism at its best, war rhetoric is fast becoming number games for leadership popularity. Most Western leaders view public as ignorant of the facts of life. The same absurd culture that separated power from wisdom and led to the cruelty of Two World Wars is overshadowing the prevalent realities for political change. At the G7 meeting in Germany, President Obama came out of the blue that he does not have a ‘complete strategy to defeat ISIL.’ If the strategy was to incapacitate the Arab countries to consider US-Israel synchronized agenda for the future of Palestine. A future without resolution of the freedom of Palestine is certainly at work. Did President Obama learn anything useful to honor his major global commitments to the humanity? “Yes we can” remained a broken promise for the large part of his official priorities. Advanced Western nations have not produced any credible leadership role model for the future generations to follow.

Unpredictable but paranoid and vengeful political leaders have incapacitated the in-born faculties of American lifelines to be a morally and intellectually crippled nation in global affairs. This was not accidental but a planned scheme of things although unknown in its short-long terms consequences over its ability to cope with the change phenomenon for a sustainable future. America became an insane – a victim of its own obsession with power and fearful of its future. Global mankind has passion for peace, not wars. Those mindless politicians claiming to have accomplished the mission in the War on Terrorism did so at the cost of ruthlessness, killings of millions of fellow mankind in Iraq and Afghanistan. Sherwood Ross (“US Sponsored Genocide against Iraq 1990-2012 killed 3.3 million including 750,000 children.” Global Research: 12/06/2012), recalls the statement of Professor Francis Boyle (Kuala Lumpur War Crimes Tribunal) and many other investigative reports clearly blaming the US led forces to have massacred more than three millions civilians in Iraq. The US and British are responsible for much of Iraq’s planned destruction, increased sectarian violence and dismantling of the political governance. Dreadful are becoming as abnormal frequency of violent killings, internal insecurity, drug-abuses and political mismanagement, several thousands Americans killed in global bogus wars and likewise wounded and crippled for life, 18-25 war veterans daily committing suicide. One wonders, what went wrong to America? William Boardman (“A Country At War With An Illusion.” Information Clearing House: 8/19/2013), spells out how America is at war with itself: “We are waging war on terrorism even as we embody terrorism. …No wonder we seem sometimes to be at war with ourselves, and have been for most of the 21st century….No American Under 12 Has Lived In A Country At Peace….America’s Main Enemy Is Nameless, Shapeless, “Associated Forces”… The American Enemies List Is Decided Anonymously and Secretly.

Do politicians having small wisdom and big mouth and no rational knowledge can determine the future of mankind? How could the mankind be protected from the sadistic mindset of the few warmongers? The Universe and all it encompasses are the products of God-given command; and do not operate in concert with man-made laws, constitutions, foreign policies, judgments, hopes and desires. Light is One, and darkness are many. Life and the Universe exist because it is ordained by the Creator of the Worlds. Be it a reminder or an advice that human life is precious and we are accountable and we must all try to pursue peace and harmony, not wickedness and extermination of life and habitats from Earth. If history is relevant and is seen as a source of learning and warning, undeniably all those superpowers well equipped with weapons and animosity to destroy others or all have met the same fate of self annihilation. It is beyond doubts that when they challenged the sanctity of the Laws of God governing the Earth and the living Universe, and invaded small and poor nations in farfetched lands, they ultimately met their own end by natural causes such as earthquakes, flooding, tornados, exploding lavas, sound blasts, lightning and lot more. Are there any thinking people to take heed from the prevalent facts of human history?

War is racketeering. Since the renewed sectarian warfare in Arab world, leading American weapon manufacturers have increased 19% prices for weapon sales. None of the combatant forces offer any plan for stopping the bloody sectarian vindictiveness. If the coalition of the willing had working intelligence, they should engage ISIL in a political dialogue to explore peace and a durable future. Obviously, ISIL’s cold-blooded killings of few foreign prisoners cannot be accepted as precepts of the Islamic behavior and values of the Muslim world, but the group is gaining ground and after Ramadi attracting large number of recruits across the Arab countries. President Obama claimed diplomacy to deal with other nations. But nothing is initiated out of the fixed strategy against ISIL or to deal with Russia for a negotiated settlement of problems.. “It is Perfectly Reasonable to Negotiate with Villains like ISIS So, Why Don’t We Do It to Save Some Lives” The Independent: 9/28/2014), asks reputable international journalist Robert Fisk. Obama says, No at the UN and adds, we do not negotiate with Evil. The same message is echoed by the UN Secretary General Ban Ki Moon. The UN and its leadership are in desperate need of a navigational change to pursue dialogue and reconciliation for peacemaking with all the belligerent parties. To any impartial observer evil is not one-sided. Political temptations and compulsion can enforce evil’s supremacy but it can never acquire victory as a permanent factor. No wonder, why America is using the logic of power and not the power of logic to respond to a critical global humanitarian crisis.

The informed global community wishes to see dialogue, reconciliation and opportunities for peaceful settlement of conflicts. Have the Two World Wars resolved any problems facing the humanity? What is the cure to raging indifference and cruelty to the interests of the whole of the mankind?  The 21st century new-age complex political, economic, social and strategic challenges and the encompassing opportunities warrant new thinking, new leaders and new visions for change, conflict management and participatory peaceful future-making. Is the 21st century political genius more redundant, backward and unable to speak against the political drudgery and wickedness of the few warlords to destroy the humanity? Perhaps, Robert Burns - the poet (“Man’s inhumanity to Man”, from his poem Man was made to Mourn: A Dirge, 1785), knew better and had unraveling and passionate moral and intellectual understanding of the human nature and interests of the global mankind to clarify:

'Many and sharp the num'rous ills
Inwoven with our frame!
More pointed still we make ourselves
Regret, remorse, and shame!
And Man, whose heav'n-erected face
The smiles of love adorn, -
Man's inhumanity to man
Makes countless thousands mourn! 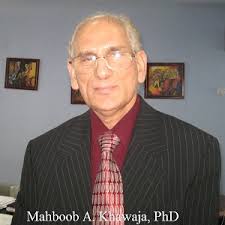 (Dr. Mahboob A. Khawaja specializes in global security, peace and conflict resolution with keen interests in Islamic-Western comparative cultures and civilizations, and author of several publications including the latest: Global Peace and Conflict Management: Man and Humanity in Search of New Thinking. Lambert Academic Publishing, Germany, May 2012)