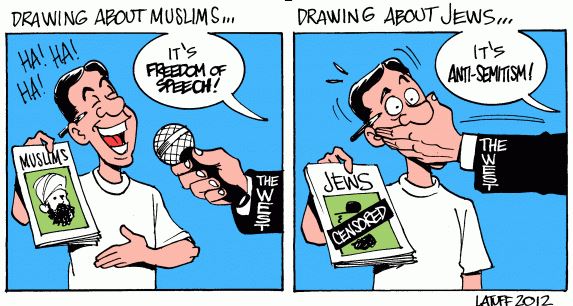 Bonn 19 January 2015. The Western democracies have a real problem with the concept of "freedom of speech". Their hypocrisy and double standards know no borders. The inflicted state terrorism of the West against Muslims in the Middle East or non-white peoples in Africa or elsewhere is boundless. But when these downtrodden victims of Western genocidal attacks fight back, they are called "terrorists". Insults and incitement against Muslims and their prophet Mohammad falls allegedly under the concept of freedom of speech, which is assumed unlimited, however, when this noble concept is used against the atrocities committed by the Zionist occupying regime in Palestine or its US master, it's considered a "crime" by the French judiciary.

Maurice Sinet,  who worked as a political cartoonist for "Charlie Hebdo" for 20 years, was fired in 2009 for his "anti-Semitic" cartoon mocking the relationship of Nikolas Sarkozy's son, Jean, with a wealthy Jewish woman. Commenting on rumors that Jean considered to convert  to Judaism out of carrier reasons, Maurice Sinet quipped: "“He’ll go a long way in life, that little lad." He was charged of "inciting racial hatred". After the journalist Claude Askolovitch thought, Sinet's article was anti-Semitic, then editor in chief, Philippe Val, demanded an apology from Sinet. He refused saying:  “I’d rather cut my balls off.” He lost his job. One of the many Zionist front Organization took him to court, and Sinet won a 40, 000 Euro court judgment against his former publisher.1

The controversial French comedian Dieudonné M'bala M'bala posted on facebook  "I like Charlie Coulibaly". An investigation by the Paris prosecutor's office followed immediately, and two days later, Wednesday 14 January, he was arrested for exercising his right of freedom of speech. His shows are banned because of being "anti-Semitic". With the approval of the French government freedom of expression can be utilized, but if it doesn't fit into the prevailing political concept of the ruling political and media class, one has a problem.

The "protest march of millions" in Paris, "led" by 40 big shots, was a fake. The heads of states did not lead the march, instead they flew in for a photo op on a hermetically sealed street. No wonder that US President Obama did not want to waste his time for such a gimmick. Many of these heads of states fight against freedom of speech in their own countries. Was this the only manipulation by the corporate media?

The circumstances of the terror attack at "Charlie Hebdo" raises more questions that it has answered so far. The cold-blooded assassination of police officer Ahmed Merabet at point-blank range did not cause a single blood splatter on the sidewalk. In the assassination of John F. Kennedy, however, there was blood and brain all over the car. How come that the attack by the Kouachi brothers and their getaway were filmed from roof tops? Who were these people and who stationed them there? Do people take their IDs with them, when going on a deadly rampage? But the world knows already that it's possible to find a brand-new passport besides the pulverized twin towers in New York City. Like the 9/11 hijackers, the perpetrators of the Paris atrocities were known within minutes.

Also the anti-terror raids in Belgium produced explosions and a burning apartment but no perpetrators. In Germany, suspects were arrested in camera. The Paris terror attakcs will be used by the local governments to crack down on civil liberties and bring the European governments in line with Washington's expansionist and deadly policy in the Middle East, against Russia and Africa.

By the way, did the Kouachi brothers know, when they committed themselves to "Al-Qaeda", that the CIA invented the term in order to subsume all the "mujahedeen freedom fighters" against the Soviet occupation of Afghanistan? Didn't US President Carter's security adviser Zbigniew Brzezinski  not only meet with Osama bin Laden but also  posed with a Kalashnikov with these so-called freedom fighters for a photo op and told them the following:

"We know of their deep belief in God, and we are confident their struggle will succeed. That land over there is yours, you’ll go back to it one day because your fight will prevail, and you’ll have your homes and your mosques back again. Because your cause is right and God is on your side." How come that within few years these religious people turned into terrorist?

The US and other Western so-called "Friends of Syria" have created, in cooperation with the Gulf dictatorships, Islamist gangs of mercenaries who lead the imperialist war by proxy. Nobody knows who hires these jihadist fighters. Are they following NATO or Salafist propaganda? Although these mercenaries still risk their lives in the struggle of the West against the Assad regime, they are misused by Western propaganda in order to present them to the domestic audience as an "Islamic threat".

After the attacks on Afghanistan and Iraq, the "Islamic threat" as a permanent tool of war propaganda that has been implanted into the consciousness of the peoples of the West. If the West does not turn away from this wrong track, he will continue to expose its populations to "Islamist threats". Western policies and media reporting over parts of the Muslim world are totally irresponsible and should be corrected.

Dr. Ludwig Watzal works as a journalist and editor in Bonn, Germany. He runs the bilingual blog "Between the lines". http://between-the-lines-ludwig-watzal.blogspot.de/