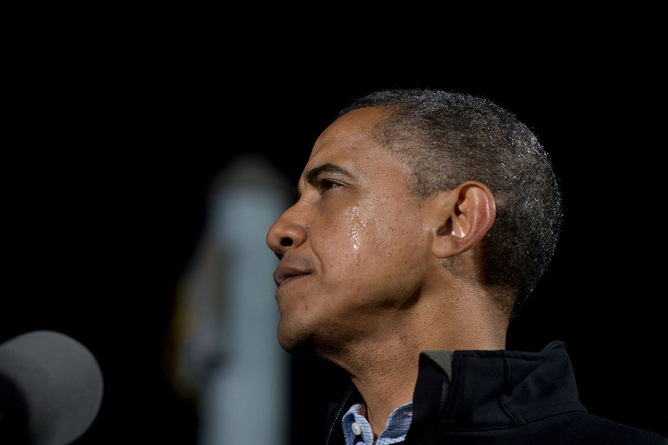 The recent elections delivered the most crushing defeat a political Party has suffered since Ronald Reagan’s 1984 Forty-nine state landslide.  Democrats were rejected by every voting block demographic: young, old, men, women, rich, poor.  Everyone said, “Enough is too much already!” Exit polls everywhere say their handling of the economy and the general direction of the country were the major reasons.  BHO tried to make the election about him as he tries to make everything about him.  His party spent millions trying to run away from him, his record, and his agenda.  However in the end the President’s repeated statements that his policies were on the ballot and that all these Democrats had supported him and his agenda outweighed his friends protests that they hardly knew him.

After the 1994 Contract With America Congress came to town in a similar wave of rejection for the Progressives and their agenda, President Clinton was eventually dragged by his advisor Dick Morris to the signing table and he eventually signed on to the Contract’s legislation.  This brought about everything he is credited with today: a balanced budget and reforming welfare.  After his comeuppance he took the microphone to remind us he was still relevant.

After his recent shellacking BHO came to the world’s stage to tell us he hadn’t lost because the two thirds of the electorate who didn’t vote support him.  He has declared himself to be the voice of those not interested enough to pry themselves off the couch long enough to vote and the advocate of those who care enough to show up.  This is a bold attempt to organize the anarchy of the militantly apathetic.

Since his meteoric messianic rise from the South Side of Chicago to the Oval Office BHO has governed against the will of the American people.  When he, Nancy Pelosi, and Harry Reid used parliamentary sleight-of-hand to shove Obamacare down our throat they knew the majority of the public opposed it.  When the President used executive orders to implement the Dream Act he knew the representatives of the people had rejected it.  When he announced the surge in Afghanistan and at the same time announced the coming evacuation, when he cut and ran from Iraq setting the stage for ISIS to rise, when he encouraged the Arab Spring to overthrow our allies and empower our enemies leading to the wholesale slaughter and dispossession of the Christians of the Middle East, he knew all of these acts were contrary to the will of the people.

So it should be no surprise that after the largest shout by the voters since the 1940s that they want him to stop his fundamental transformation of America he plans to move ahead with his import-a-voter campaign.  Any moment now he will announce another decree from the imperial presidency.  In the wave of his hand that disregards the wave of the people he will legalize millions of illegal immigrants.  These are people who have broken our laws.  These are people whose goal is to take jobs from Americans.

I know that we are told constantly by the Corporations Once Known as the Mainstream Media that these people are doing the jobs Americans refuse to do.  If this is so then why are the majority of people in the very sectors that employ the majority of illegals: farming, construction, lawn care, manufacturing, restaurants, and service still legal American workers?  Why when the INS staged a raid on chicken processing plants and rounded up the illegal immigrants who had these difficult and unpleasant jobs were there legal workers lined up to replace them?  Americans are hurting for jobs.  The unemployment figures are smoke and mirrors.  They do not reflect all the millions who have quit looking, those who are working part-time who want full time, or those whose benefits have run out.  The central government in a transparent attempt to put a good spin on a massive problem only counts those who are receiving unemployment benefits.  Then again the official inflation report leaves out food and energy for an unreal twist to a real problem.

BHO knows the Congress will do nothing to stop him.  Boehner has already taken impeachment off the table and if the Clinton interlewd taught us anything, even when a president is obviously guilty a Republican senate will not convict.

It almost seems as if BHO is intent on igniting a violent reaction from those who believe in limited government.  This would give him an excuse for an even more autocratic response.  He told us before he was elected that what we needed was a civilian defense force as well armed as the armed services.  Today he is hurriedly militarizing the police as he pink slips the army

We must avoid this trap.  We need to urge our elected representatives to do all they can to stop any and all unconstitutional actions on the part of the executive.  They need to reassert the power and authority of the legislature to reasserting the system of checks and balances that is at the heart of the American system of government.  If need be the legislature should use its power to curb the federal courts.  They have the power to make place any issue beyond the scope of judicial review.  They even have the power to abolish all federal courts below the Supreme Court.

The authority is there in the Constitution if our elected representatives will use it.  They can right the ship of State before it capsizes into the shabby swamp of socialist collectivism.  However I am sorry to say these bold new fresh faces we have just sent to Chicago on the Potomac will learn how to play the game before they get there.  They will reaffirm John Boehner and Mitch McConnell as the same old same old and before we can say wave the wave will have broken against the cliff of status quo that is the Washington establishment.  Our new heroes will bend over backwards to reach across the aisle, and they will do nothing to stop our rule-by-decree executive who allows his dedication to anti-colonialism color every decision.

We may have been a colonial power.  We may have been aggressive at times in our past.  However, America is the greatest force for good that this world has ever known.  We have provided the model for individual liberty, personal freedom, and economic opportunity for the world.  American exceptionalism is a reality even if the current occupant of 1600 Pennsylvania Avenue doesn’t understand it.

Without enough votes to override a veto there is little chance of rolling back the transformation. Just remember gridlock is out friend.

Keep the faith. Keep the peace.  We shall overcome.

This is a bold attempt to organize the anarchy of the militantly apathetic.