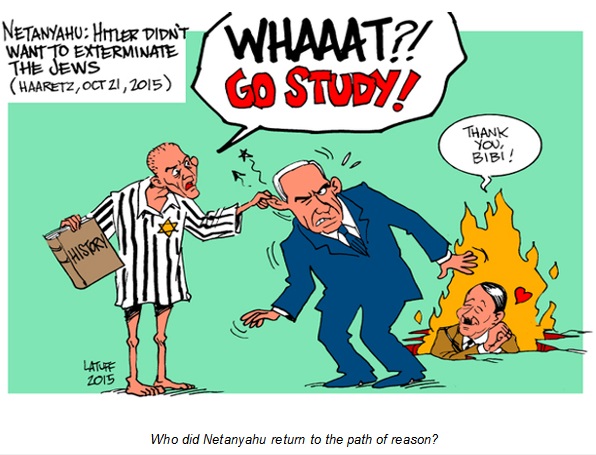 Having watched Israel's Prime Minister since 1996, I haven't made up my mind whether Binyamin Netanyahu is crazy or he just going to play games with the public. Right now, I still tend to the latter, although I think he's not as savvy as Shimon Peres.

Although Netanyahu's Zionist believers may take his historical fairy tales at face value, the world has shown him a red line. They won't be fooled by a charlatan.

According to Netanyahu, Hitler got the idea of the Final Solution from the mufti Amin al-Husseini. Hitler just wanted to expel the Jews the mufti told him to "burn them". The mufti as the string-puller behind Hitler, which seems quite bizarre. If it had not been for the Israeli Prime Minister, nobody would have taken notice of this nonsense.

Netanyahu is not so clever that he would himself come up with this rubbish. He has excellent spin doctors who do the readings and writings. Two Zionist scientists discovered these groundbreaking insights in the book "Nazis, Islamists and the Making of the Modern Middle East".1

After a public outcry, Netanyahu had to row back. Hitler and the mufti met only once on 28 November 1941 in Berlin. Hitler did not like al-Husseini and did not want to see him again. The systematic destruction of European Jewry began mid-June 1941. In his public apology, Netanyahu wrote: "The decision to move from a policy of deporting Jews to the Final Solution was made by the Nazis and was not dependent on outside influence. The Nazis saw in the mufti a collaborator, but they did not need him to decide on the systematic destruction of European Jewry, which began in June 1941.”

With this unhistorical view, did Netanyahu want to distract attention from his brutal oppression of the Palestinians or the efforts of right-wing Jews to take over the Temple Mount? In linking the mufti to the Nazi atrocities, Netanyahu aimed, de facto, at President Mahmoud Abbas in order to weaken his already weak position even further and squeeze further concessions out of him.

The world should not put up with the brutality of the Israeli Terrorist Forces (ITF) against a helpless people and intervene militarily on behave of the oppressed.