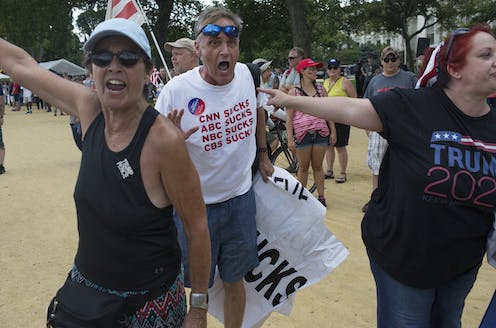 People see bias in the stories that favor the other party, but they tend not to see bias in stories favoring their own party. Andrew Lichtenstein/Corbis via Getty Images

Charges of media bias – that “the media” are trying to brainwash Americans by feeding the public only one side of every issue – have become as common as the hope that the presidential race will end safely … and soon.

As a political scientist who has examined media coverage of the Trump presidency and campaigns, I can say that this is what social science research tells us about media bias.

First, media bias is in the eye of the beholder.

Research shows that Republicans and Democrats spot bias only in articles that clearly favor the other party. If an article tilts in favor of their own party, they tend to see it as unbiased.

Many people, then, define “bias” as “anything that doesn’t agree with me.” It’s not hard to see why.

Sometimes Fox News, the media outlet for conservative viewers, does its own media criticism. Here, anchor Sean Hannity tells viewers “What the mob and the media will never tell you…”

‘Media’ is a plural word

As the lines have been drawn more clearly, many people have developed hostile feelings toward the opposition party.

In a 2016 Pew Research Center poll, 45% of Republicans said the Democratic Party’s policies are “so misguided that they threaten the nation’s well-being,” and 41% of Democrats said the same about Republicans.

That doesn’t mean that “the media” are biased. There are hundreds of thousands of media outlets in the U.S. – newspapers, radio, network TV, cable TV, blogs, websites and social media. These news outlets don’t all take the same perspective on any given issue. If you want a very conservative news site, it is not hard to find one, and the same with a very liberal news site.

“The media,” then, present a variety of different perspectives. That’s the way a free press works.

The Constitution’s First Amendment says Congress shall make no law limiting the freedom of the press. It doesn’t say that Congress shall require all media sources to be “unbiased.” Rather, it implies that as long as Congress does not systematically suppress any particular point of view, then the free press can do its job as one of the primary checks on a powerful government.

When the Constitution was written and for most of U.S. history, the major news sources – newspapers, for most of that time – were explicitly biased. Most were sponsored by a political party or a partisan individual.

The notion of objective journalism – that media must report both sides of every issue in every story – barely existed until the late 1800s. It reached full flower only in the few decades when broadcast television, limited to three major networks, was the primary source of political information.

Since that time, the media universe has expanded to include huge numbers of internet news sites, cable channels and social media posts. So if you feel that the media sources you’re reading or watching are biased, you can read a wider variety of media sources. 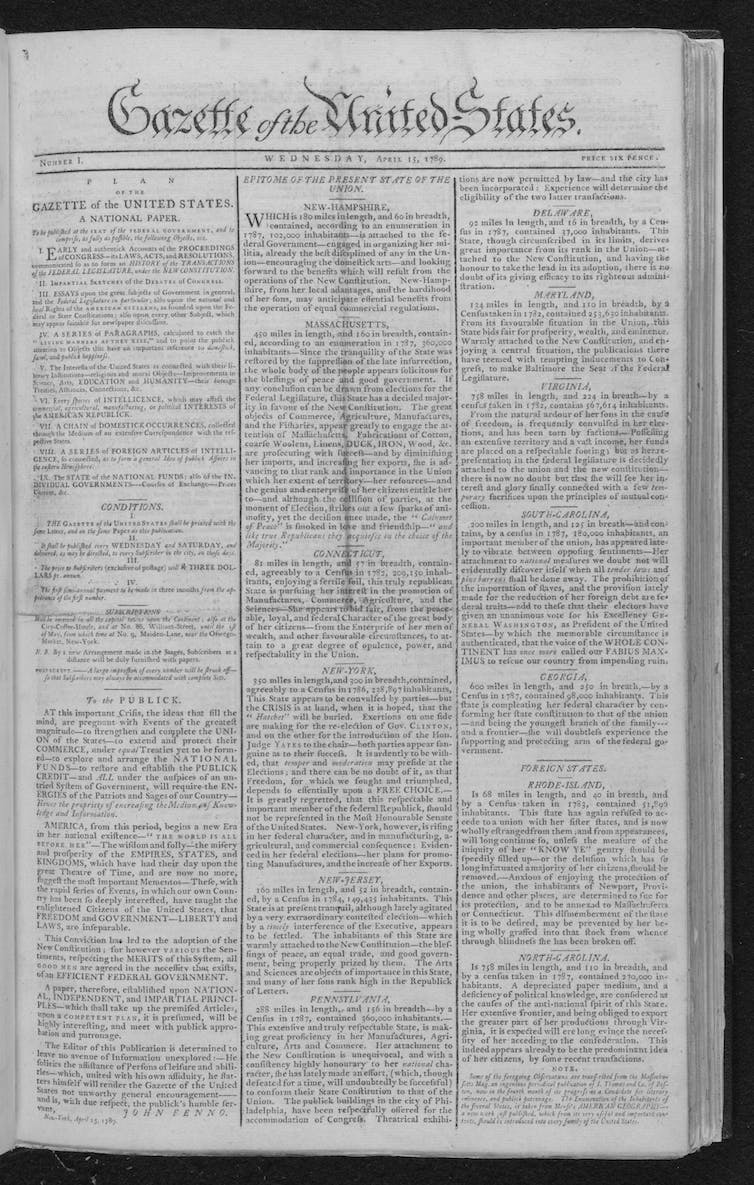 Thomas Jefferson described this partisan newspaper, The Gazette of the United States, as ‘a paper of pure Toryism…disseminating the doctrines of monarchy, aristocracy, and the exclusion of the people.’Library of Congress, Chronicling America collection

If it bleeds, it leads

There is one form of actual media bias. Almost all media outlets need audiences in order to exist. Some can’t survive financially without an audience; others want the prestige that comes from attracting a big audience.

Thus, the media define as “news” the kinds of stories that will attract an audience: those that feature drama, conflict, engaging pictures and immediacy. That’s what most people find interesting. They don’t want to read a story headlined “Dog bites man.” They want “Man bites dog.”

The problem is that a focus on such stories crowds out what we need to know to protect our democracy, such as: How do the workings of American institutions benefit some groups and disadvantage others? In what ways do our major systems – education, health care, national defense and others – function effectively or less effectively?

These analyses are vital to us as citizens – if we fail to protect our democracy, our lives will be changed forever – but they aren’t always fun to read. So they get covered much less than celebrity scandals or murder cases – which, while compelling, don’t really affect our ability to sustain a democratic system.

Writer Dave Barry demonstrated this media bias in favor of dramatic stories in a 1998 column.

By focusing on the daily equivalent of the underage sheep, media can direct our attention away from the important systems that affect our lives. That isn’t the media’s fault; we are the audience whose attention media outlets want to attract.

But as long as we think of governance in terms of its entertainment value and media bias in terms of Republicans and Democrats, we’ll continue to be less informed than we need to be. That’s the real media bias.