Congress had very few women members back in 1960, and just one woman of color: Representative Patsy Mink of Hawaii.Smith Collection/Gado/Getty Images)

Clad in suffragette white, Kamala Harris used her first speech as the United States’ first female vice president-elect to commemorate women’s political achievements. Her victory comes one century after the 19th Amendment, which gave American women the right to vote.

Anthony did advocate for the 19th Amendment. But she wanted only some women to vote.

In testimony before the Senate in 1902, Anthony suggested that white women would be more qualified voters than “ignorant and unlettered” Hawaiian and Puerto Rican men, “who know nothing about our institutions.”

Anthony’s racist and xenophobic feminism runs counter to Harris’ own political and family genealogy as the child of immigrants and of racial justice movements.

As many news articles have pointed out, Harris’ truer political forerunners are Black presidential candidates like Shirley Chisholm. But another politician who blazed a path for Harris is often overlooked: Patsy Takemoto Mink, Congress’ first woman of color and a 1972 presidential aspirant.

Mink was a third-generation Japanese American from Hawaii. With her daughter, political scientist Gwendolyn Mink, I am writing a book about Patsy Mink’s life.

In Congress, where she served for 24 years, Mink spearheaded lawmaking from a feminist perspective that considered the diverse needs of diverse women. 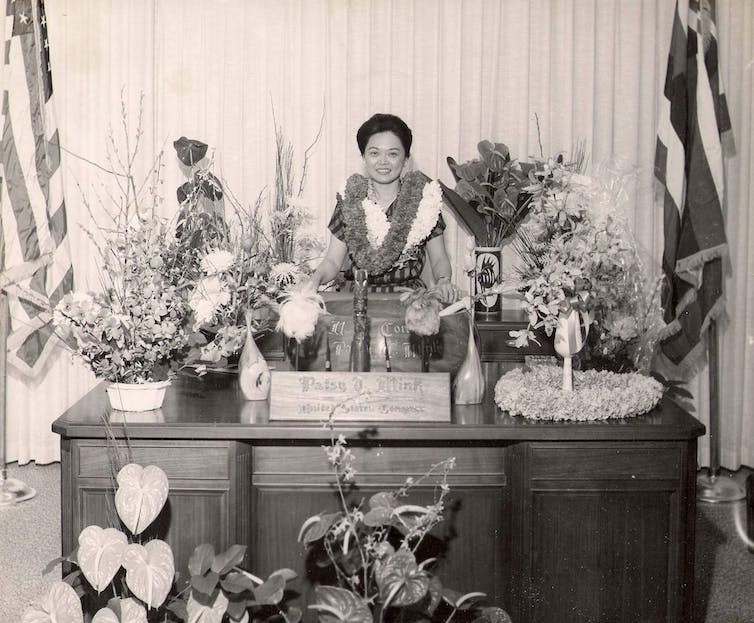 Mink in her office, about 1967.Personal collection of Gwendolyn Mink, CC BY

During her first terms as a House Democrat, from 1965 to 1977, Mink co-sponsored Title IX, a law mandating gender equity for schools that receive federal funding. It expanded women’s previously limited access to higher education, scholarships, housing, jobs and sports.

Mink didn’t just work to empower women. Coming from Hawaii, the 50th state and a former colonial territory, she understood that the ongoing violence of the U.S. empire required government oversight.

Mink sought an end to nuclear testing and military training in the Pacific. A 1973 lawsuit she organized to obtain information about nuclear testing in the Bering Strait, Mink v. EPA, strengthened the Freedom of Information Act, and was later cited to justify releasing President Richard Nixon’s secret Watergate tapes.

Mink also was an early opponent of the Vietnam War, running for president in 1972 as an antiwar candidate. Ultimately she decided to campaign in only one state, Oregon. Shirley Chisholm also ran that year, and the two discussed how to avoid competing with each other.

In Congress Mink worked with Chisholm – whose parents came from the Caribbean – to recognize empire and immigration as part of American society. They ensured the U.S. territories of American Samoa, Guam, Puerto Rico, the Trust Territories and the Virgin Islands had representation at the 1977 National Women’s Conference, the only federally funded gathering authorized to create a national agenda on women’s issues.

Mink served in Congress again from 1990 until her death in 2002, fighting in the final years of her life for improved, rather than restricted, government assistance to poor women and children. 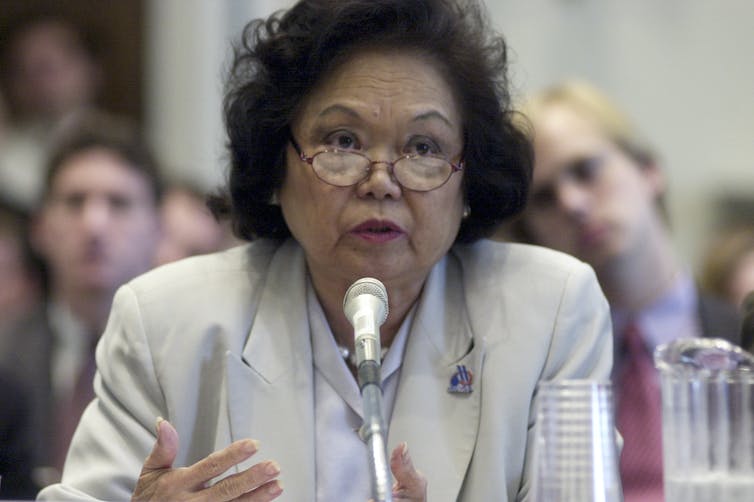 Mink demanded rights for all women, including and particularly those on the margins.

Yet she was notably absent from a recent miniseries, “Mrs. America,” which featured the arch-conservative Phyllis Schlafly and the 1960s-era activism of Gloria Steinem, Betty Friedan, Shirley Chisholm and Bella Abzug. Mink collaborated with these feminist all-stars on Title IX, the National Women’s Conference, federally funded child care and much more.

Just as U.S. history puts white men at its center, the history of feminism – and of anti-feminism – tends to spotlight white women.

Black women like Stacey Abrams and Shirley Chisholm who served as the vanguard of democracy are starting to get their due. When Hillary Clinton ran for president in 2016, Chisholm was recognized as her forerunner. 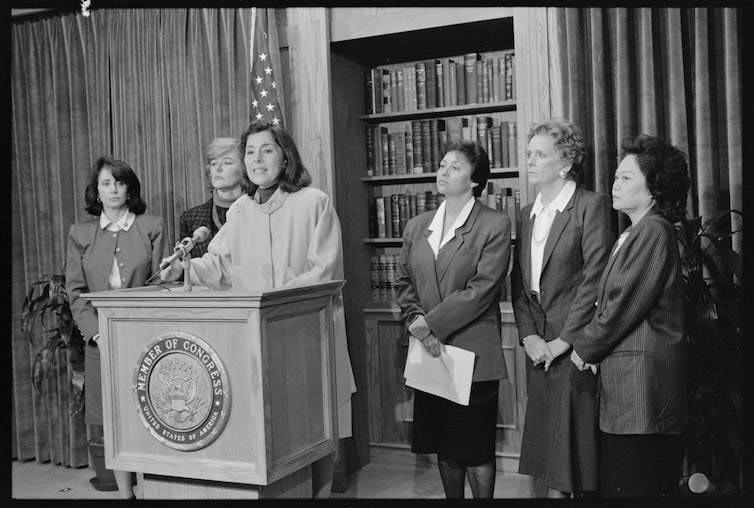 That the United States’ next vice president is a mixed-race woman with ancestral ties to Jamaica and India could help to expand these deep-rooted conceptions of what U.S. citizens look like and who can be a political leader.

The imprint of empire shaped the migration, educational aspirations and politics of Harris’ family, just as it did Mink’s.

In 2018, Hawaii erected a statue to honor Mink. The site, in Honolulu, features quotes from this homegrown political hero.

“It is easy enough to vote right and be consistently with the majority,” Mink said in a 1976 speech, “but it is more often more important to be ahead of the majority and this means being willing to cut the first furrow in the ground and stand alone for a while if necessary.”

Shortly after Mink died, Title IX was renamed the Patsy T. Mink Equal Opportunity in Education Act. Representative Maxine Waters, paying tribute to her friend at a 2002 congressional memorial, reflected on a WNBA game the two women had recently attended.

“As I looked at all of those strong, tall women out there playing,” Waters said, “I thought it was a short, little woman that caused this tall, big woman to be able to realize her dreams.”

Judy Tzu-Chun Wu does not work for, consult, own shares in or receive funding from any company or organization that would benefit from this article, and has disclosed no relevant affiliations beyond their academic appointment.