Bonn 30 June 2015. The world is on a brink of America's instigated wars against all countries that would not succumb to political pressure by the U. S. Empire. This "globalization of war"-doctrine is, according to Michel Chossudovsky, professor of Economics and Director of the Centre for Research on Globalization (CRG) in Montreal, Canada,  the centerpiece of America's hegemonic project in order to gain world domination.

"The United States and its allies have launched a military adventure that threatens the future of humanity", he wrote. Some argue that ISIS terror are just blowback-operations by the downtrodden peoples. Before, talking about "Islamic terrorism" one has to address "Western-inflicted terrorism" upon these countries.

Israel's attacks against Gaza and Western provocations against Russia are closely coordinated by a "US-NATO-Israel"-alliance, writes the author. Anyone who thinks that Israel commits its crimes against the Palestinians People without U. S. permission is political naive. The atrocities committed by the Zionist occupation regime are subsidized by the U. S. to the tune of  3 Billion U. S. Dollars per year, plus the extra military hardware.

According to Chossudovsky, the concept of "Long War" is an integral part of U. S. military doctrine. It's based on the concept of "Self Defense", which means that the Western world are threatened, presumably by the Islamic world. The author refers to a study by the Rand corporation, which describes to three major threats to U. S. interests "related to the ideologies espoused by key adversaries in the conflict, related to the use of terrorism, and related do governance".

In his book, the author focuses on the dangers of nuclear war and the evolution of military doctrine after 9/11. The "Globalization of War" couldn't have been so successfully implemented without the massive support of the corporate media. They have propagandized against all odds the view of a never-ending war of the U. S. Empire against its "enemies". That the U. S. has created these scapegoats in the first place is commonly glossed over.

Chossudovsky also expresses sharp criticism against the left. These "progressives" have failed to mobilize the public against U. S.-NATO interventions in Yugoslavia, Afghanistan, Iraq, Libya and Syria, and have also supported the official account on 9/11.

In thirteen chapters, the author meticulously unravels the geopolitical intentions of the U. S. and its Western minions to dominate the world. The West has embarked on a "war without borders". The perverted Western policy manifests itself by the fact that "the Commander in Chief of the largest military force on planet earth is presented as a global peace-maker". The realities have be turned upside down: "War is Peace". Or as the daily Washington Post phrased it: "War makes us safer and richer." Whereas a Neo-Nazi regime directly supported by the West has been installed in the Ukraine, Russia is threatened by the U. S.-Nato-led war alliance with military actions on its Western borders, writes the author. His analysis is supported by an interview of Brzezinski.

NATO appears to prepare for war, as the latest maneuver in Sweden and the massive weapons build-up in the Eastern European countries like Poland or the Baltic states show. The author points out that the U. S. Senate adopted in 2002 a first-strike nuclear capability as a central pillar of U. S. policy against Russia. According to him, the U. S. politicians have  explicitly stated that they would wage a nuclear war against Russia if need be. The George W. Bush administration has more than once threatened Iran or Syria with so-called mini-nukes, which have a lower nuclear capacity.

In a previous book, Towards A World War III Scenario, Chossudovsky wrote about a meeting organized in August 2003 by the Pentagon in Nebraska, where over 150 military contractors and scientists gathered to discuss the development of a more nuclear viable technology, so-called bunker busters and mini-nukes of the modern area. This meeting sets the stage of "Privatization of Nuclear War", so Chossudovsky. These tactical nuclear weapons are deployed in five non-nuclear states such as Belgium, Germany, Holland, Italy, and Turkey. They are aimed against targets in the Middle East.

What the author unfolds in his study is ignored by major opinion leaders in Europe, including in Germany. For discussing these existential questions in Germany, one may be labeled an "Anti-American".

Michel Chossudovsky has written an inspiring analysis of the global outreach of the U. S. Empire that threatens not only the existence of individual states but all of humanity.

Dr. Ludwig Watzal works as a journalist an editor in Bonn, Germany. He runs the bilingual blog between the lines. http://between-the-lines-ludwig-watzal.blogspot.de 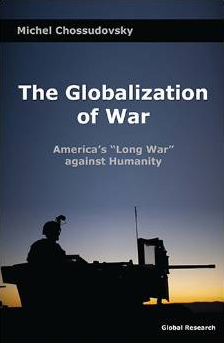