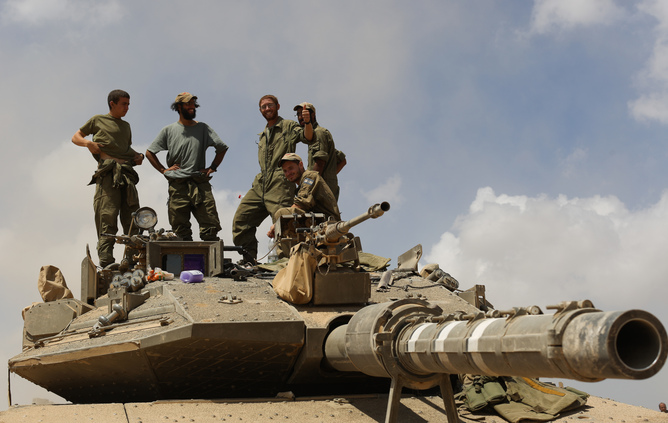 Bonn. Israel's economy minister Naftali Bennett, the leader of the right-wing party "The Jewish Home", published an article in the New York Times1 in which he buried the concept of a "two-state solution" as a way out of the Israeli Palestinian conflict. Bennett does not belong to the radical Zionist fringe. Although he is an advocate of extremist colonial Zionist ideas, he is considered to be the successor of Prime Minister Benyamin Netanyahu. In his Op-ED, Bennett has made a mockery of the policy of the last 20 years, which was connected to the Oslo Accords and the two-state solution. His words won't bear fruit right now, but they might be in the future.

The threat scenario, which Bennett forecasts for Israel, seems to be the consequence of the behavior of Israel as an occupying power: the strangulation of the Palestinian people for the last 47 years, the 18 year-long occupation of Southern Lebanon, the arbitrary bombardments of its neighboring countries, and the killing of thousands of Palestinian people. If Israel would pull out of the occupied West Bank, not only Tel Aviv's Ben-Gurion Airport and its Stock Exchange but also the old-City of Jerusalem could come under rocket attacks, writes Bennett.

In support of his reasoning he adduces three examples: The Oslo Agreement and the pull-out from some West bank cities under Yitzhak Rabin, the head-over-head-withdrawal from Southern Lebanon in 2000 by the Barak government, and the withdrawal from the Gaza Strip in 2005 under Ariel Sharon. According to Bennett, all ended up in more terror attacks against Israel.

As a favor for the Palestinians, he proposes the annexation of over 61 per cent of the West Bank (Area C in which only 6 percent of the Palestinians live), and on the top of it, he proposes to grant to them citizenship rights in Israel. However, this “gift” does not mean a thing, as Israeli Palestinians know. After 66 years, they are still treated as second class citizens in Israel. Observing how the Zionist majority treated Azmi Bishara and treats Hanin Zoabi, a former and a current member of the Israeli Knesset, should be a warning signal for the proposed "new" Palestinian "citizens" in Israel.

In the last couple of years, Palestinian and anti-Zionist Israeli and Jewish activists all over the world have been calling for a "one-State solution" in order to solve the Israeli Palestinian conflict. They picked up old bi-national ideas discussed during the British Mandate period that lasted until 1948. At the 12th Zionist Congress of 1921, the representative of a "spiritual" version of Zionism, the German philosopher Martin Buber, proposed a resolution that urged Jews to reject "the methods of nationalistic domination, under which they themselves have long suffered", and to reject any desire "to suppress another people or to dominate them", since in Palestine "there is room both for us and its present inhabitants". The resolution further asked for "a just alliance with the Arab peoples" in order to turn the future "dwelling-place into a community that will flourish economically and culturally, and whose progress would bring each of these peoples unhampered independent development". The difference between Buber's proposed resolution and the finally accepted one by the Zionist Congress seemed, at first sighed, minor, but Buber did not condition agreement with Arabs on acceptance of the Balfour Declaration. That official Zionist position was a non-starter. No Arab official could have accepted the Declaration because it privileged the Jewish minority in Palestine over the Arab majority. With the establishment of the State of Israel these reasonable voices fell silent. At the end, political Zionism prevailed and became Israel's dominant ideology.

Predominantly, radical Zionists dominate public opinion not only in Israel but also in the USA and increasingly in Germany. The strength of the forces behind Bennett and the Netanyahu government is demonstrated by the casino mogul Sheldon Adelson and media mogul Haim Saban. Both belong to the so-called Zionist mainstream. And their political ideas are chilling. If the "Two -State Solution" fails, it would make Israel an "Apartheid-State.” For Adelson this would not represent a problem: “So Israel won’t be a democratic state, so what?” At least, Haim Saban wants to secure "the future of a democratic Israel". For Adelson, these ideas would be "committing demographic suicide". Saban offered a charming alternative to President Obama's negotiation efforts to reach a fair agreement with Iran. He "would bomb the living daylights out of these sons of bitches". And Netanyahu would perhaps left "screwed".

For the Palestinian leadership, time appears to run out. President Mahmoud Abbas has to spend all his skills to push for the recognition of Palestine within the EU. He must finally make a motion to the United Nations to admit the State of Palestine as a member, despite the warning of the US that it would hurt the peace process that has been moribund for the last 20 years. The political haggling had been intended to lull the West and to deceive the public about Israel's expansionist goals.

Bennett's article and the reprehensible views of leading Zionist billionaires in the US, not to forget Netanyahu's political obsession with Iran, should be a wake-up call for Western politicians and diplomats. To save their two-state solution, they have to recognize the State of Palestine right now. If they fail again, as they have been doing during the last 20 years, the one-state solution will be the only alternative. The one-state solution in the offing has nothing to do with a bi-national state or a state for all its citizens. It would be a one-state solution based on discrimination, an Israeli version of apartheid.

Dr. Ludwig Watzal works as a journalist and editor in Bonn, Germany. Her runs the bilingual blog "between the lines. http://between-the-lines-ludwig-watzal.blogspot.de/