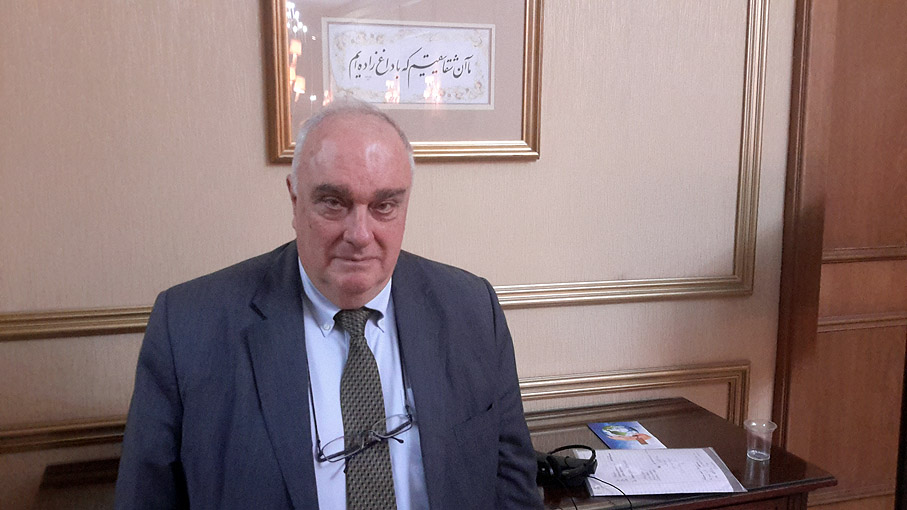 The International Conference on World Against Violence and Extremism was held in Tehran from December 9-10 to honor the proposal put forward by Iranian President Hassan Rouhani in his speech at the 68th session of the United Nations General Assembly regarding the exigency of forming a global coalition to fight the growth of extremism and radicalism across the globe.

In his address to the 68th session of the UN General Assembly, President Rouhani underlined the fact that the Middle East has been burning in the fire of extremism and violence for a long time as a result of the presence of forces that are not genuinely concerned about the wellbeing and tranquility of the people living in the region; forces who don’t speak “a single language” nor are they of a single skin color or nationality. President Rouhani called on the international community to unite against violence and extremism in all its forms and manifestations, as well as sectarian violence.

On December 18, 2013, the UN General Assembly unanimously voted to adopt President Rouhani’s WAVE proposal with consensus, despite opposition from the United States and Israel.

The WAVE conference in Tehran brought together hundreds of former and current politicians, diplomats, public intellectuals, policymakers, authors, university professors, religious leaders and academicians to engage them in two days of intensive debate, cultural exchange and speaking to find ways for making a world free of extremism and violence a reality.

The conference attendees and panel speakers, sponsored by Iran’s Foreign Ministry and organized by Tehran’s Institute for Political and International Studies (IPIS), came from more than 40 countries, and most of them were excited at seeing Iran for the first time in their life. The majority of the speakers applauded President Rouhani for presenting such a prudent proposal to the United Nations and underscored the vital role of Iran in leading a global fight against terrorism and violent extremism.

Iran Review conducted interviews with a number of the conference attendees and prominent guests, which will be published one by one in a row. The first interviewee is Prof. Paolo Cotta-Ramusino.

Since August 2002, Prof. Paolo Cotta-Ramusino has been the Secretary General of Pugwash Conferences on Science and World Affairs. Founded in 1957, Pugwash conference is an international organization based in Nova Scotia, Canada that provides the scholars and public figures with the opportunity to come together and discuss international affairs, with a special focus on nuclear disarmament. Pugwash conference was organized following the publication of Russell-Einstein Manifesto on July 9, 1955, in which they had demanded the scientists to discuss the dangers of the weapons of mass destruction.

Cotta-Ramusino is also a Professor of Mathematical Physics at the University of Milan. He is an adjunct professor of the Belfer Center for Science and International Affairs, John F. Kennedy School of Government, Harvard University. He is a renowned advocate of a WMD free Middle East and in 1983, he co-founded the Italian Union of Scientists for Disarmament

We talked to Mr. Ramusino on the challenge posed to the regional and global security through the rise of terrorist and extremist groups in the Middle East, and the road ahead of Iran and the United States to strike a comprehensive deal over Tehran’s nuclear program. What follows is the text of the interview.

Q: What do you think about the international consensus that has emerged around President Rouhani’s proposal for a World against Violence and Extremism? What’s your assessment of the fact that the majority of UN member states have agreed to adopt it as a resolution?

A: I think this is a very positive step. As I was saying in the meeting, it’s much better to call this a battle against extremism and violence as the opposed to terrorism, because terrorism is used as a nickname for enemies by many people, with its different meanings. I think there is a certain need to call on the international community to have a more peaceful and open dialog on this issue. This is incompatible with the killing which is going on in many places including Syria and Iraq.

Q: So, in fighting against violence and extremism, which option should be given the priority to; the military option or diplomacy? Do you think that diplomacy works at all?

A: I think taking up diplomacy is a difficult quest, so I think it’s better if we go for a combination of the two. But what is important is to understand the causes that are behind the “success of some extremist movements.” And if there is a perception that some parts and sects of the community, Shiites or Sunnis, have quarrels with each other, they should discuss that. So the point is that there is not only dealing with extremism but also with the success or partial success of some extremist movement in the region.

Q: You referred to the extremist movements that are growing in our region. How much influence has the U.S. occupation of Iraq had on the rise of the ISIS or the Islamic State, and how much do you associate the rise of ISIS with the policies of the United States and the fact the people of the region have been holding grudges against the United States?

A: I honestly don’t think that this is the primary cause. The primary cause for the situation in Iraq has been the conflict between different groups inside Iraq, namely the groups of Shiites and Sunnis, which was very much pushed forward in the negative sense by Saddam Hussein. And then after that, something has been addressed, but at times in an incorrect way. So remember that the ISIS now is supported by former military commanders of the Saddam Hussein regime.

Q: So, do you think that the global coalition against ISIS, that comprises the United State and its NATO allies as well as the Arab states of the Persian Gulf, would be embarking on a successful mission to fight this terrorist cult that has emerged in the region? Do you think that this military coalition is effectively doing its lion share of responsibility in fighting them?

A: I think probably not. I think what is needed to be, as I said before, is a more comprehensive understating of each other in the first place. Second, I think Iran, which is in a sense a victim of these terrorist groups, should be cooperative with others. I think at the front of the ISIS, you can see signs of cooperation between the West, the Iraqi government, the U.S. and Iranians. In a sense, we should push forward, and as I was saying, we have to be very careful that the campaign against ISIS is not a campaign against the people that are controlled by the ISIS.

Q: What’s your viewpoint on the role Iran can play in tackling the concern of ISIS and fighting this terrorist group? The United States has singled out Iran of its anti-ISIS coalition and said that it’s not cooperating with Iran, and Iran has mutually announced that it would not work with the United States in the fight against ISIS. How much influence can Iran have on tackling this problem?

A: I think it can be a lot. I think that Iran, in a sense, has an opportunity to play a bigger role in the region. Iran should make very clear to the other powers in the region, especially Saudi Arabia, that it’s not a matter or an issue of leadership in the Islamic world or in the region which is at stake. What it at stake is the elimination of these violent and extremist methods of fighting which is damaging everybody including the West.

Q: I also have a question on the ongoing nuclear talks between Iran and the six world powers. Do you think that the talks are going to yield significant results and lead to a comprehensive agreement that can eliminate all the misunderstandings between Iran and the international community over Iran’s nuclear program?

A: Well, this is my specialty. On that sense, I’m a little biased. I think I would support the elimination of sanctions against Iran. I think there is nothing that Iran can do much more. I mean they can do more, but I don’t think it’s so important. I’m not concerned about the existence of a military option against Iran. I think Iran has a right to develop nuclear energy, but the question is that whether it is sensible or not, useful or not. This is something that Iran can decide, but if the climate is a climate of cooperation, then a decision can be made in the right way.

A: Exactly, I think so. I think exactly so.

Q: Would you please elaborate on the ways the comprehensive agreement on the nuclear issue can contribute to a viable reconciliation between Iran and the United States? Do you think such a rapprochement is possible and how it should be realized?

A: I think that a good sense should prevail. I’m afraid that the United States has too many antibodies against Iran. I hope this will be fully eliminated. I hope, sincerely hope!

Q: You have studied Iran extensively. Don’t you think that the economic sanctions imposed against Iran by the United States, the UN Security Council and European Union have had negative impacts on the daily lives of ordinary Iranian people? What’s your opinion on the humanitarian impacts of sanctions and the fact that they have troubled Iran’s economy?

A: I think the United States is preaching to the choir, as we say. I’m against keeping the sanctions on. I think there is enough room for reassuring the international community that Iran does not want to have nuclear weapons and with some key steps like additional protocol and inspections, there would be no doubt at all. There should be no doubt at all. I think you should also convince the other countries including Saudi Arabia and Israel that there is no real interest in Iran to pursue military nuclear option.

Q: So, what about Israel’s own nuclear program?

A: Oh, that’s another story. As you know, we are totally against nuclear weapons.

Q: Even if it’s possessed by Israel?

Q: And by the United States itself?

A: Yes, of course. Eventually yes. We should make this feasible and we should discuss the WMD free zone in the Middle East which of course includes nuclear weapons. I think Israel, honestly should be convinced that there is no added value to their security from nuclear weapons. What do they do? They do nothing! They’re sitting there and do nothing, certainly nothing. And more understanding of the needs of the Palestinian economy will be better for the security of Israel which is something that they can do.

Q: Don’t you think that a Republican president in the United States in the future or a Republican-majority Senate are going to ruin the efforts made by the Iranian and U.S. governments to reach a nuclear solution?

Q: But the Senate is won by the majority of Republicans now...

A: You see, in the past, the Republicans had been very aggressive while they were not in power, until when George W. Bush came to power. At times, there are important things in the past; remember that Nixon went to China. And maybe there is someone who is doing the same for Iran and say let’s stop this. That’s all.

Q: Great! Thank you for participating in this interview.