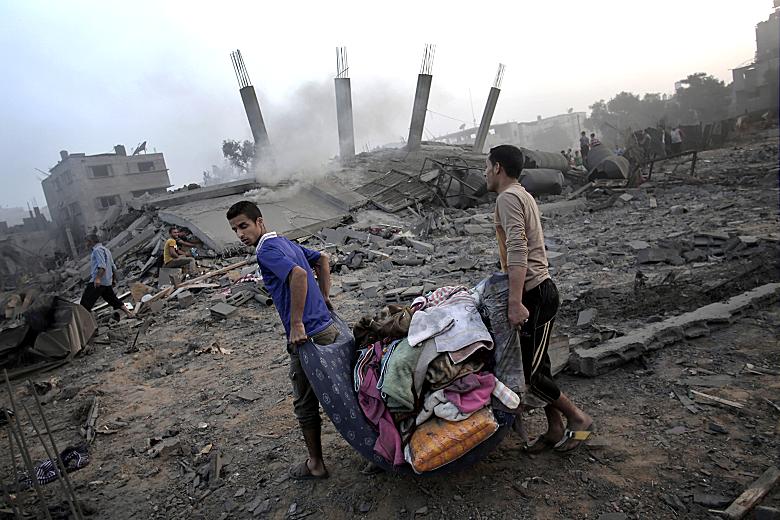 30 July 2014. What is missing in all reports of civilian casualties of Israel’s most recent attack on Gaza is context. Only Hamid Dabashi has put the number in some context in an opinion piece that he has published in Aljazeera. I want to approach the carnage from a slightly different angle but must repeat some of the data first.

The Strip has a population of 1,816,000. Compared to the U.S. (88.6/sq. m) or Iran (124/sq. m), Gaza, with its 13,069 residents per square mile, is one of the most densely populated regions of the world. That fact makes the New York Times’ report that Hamas is firing rockets at Israel from crowded neighborhoods both bizarre and absurd. Decades of Israeli expansionist policies have packed so many Palestinians into Gaza that neither firing rockets nor anything else can take place outside “crowded neighborhoods.”

As of this writing in July 26, 2014, over 1000 Gazan civilians, mostly women and children, have been slaughtered by Israel’s latest assault. The slaughter, dubbed “Operation Protective Edge,” or as Stephen M. Walt more aptly calls it, “Operation Déjà Vu”, is ongoing as I write, and the bodies keep piling up. But simply putting the number of the Gazan casualties at one thousand does not do the carnage justice. The civilian casualties need to be put in terms that might mean something, to those who live far from the tragedy and the odor of their presence.

The 1000 slain Gazans constitute 0.055% of the strip’s total population. If the United States were to lose the same percentage of its 318,434,000 inhabitants, the number of the American dead would surpass 175,000. I have put the numbers into the following table for the U.S., U.K., China, India, Iran, Japan, and Germany:

The comparison must be especially poignant to the Japanese because on August 9, 1945, when the United States dropped a nuclear bomb on Nagasaki, some 35,000 (according to the U.S. Strategic Bombing Survey of 1953) or 20,000 (according to a Japanese study in 1960) were extinguished. That is, compared to the number given in the table above, Japan lost fewer people in Nagasaki than it would have lost, had it lost the same percentage of its citizens that Gaza has lost to the massacre by the Israeli armed forces.

This brings me to the rationalizations of the Israeli savagery that pass for “reportage” in the western press. With very few exceptions, the western press’ headlines are designed to spare Israel, rather than to inform.  When the Israelis shell a United Nations’ school in which some one thousand women and children were seeking shelter, and kill or injure scores of them, the CNN headline reads, “Strike hits shelter in Gaza.” That is, it was not Israel, but the “Strike” that committed the atrocity. CNN who has made a practice of transferring those reporters who express normal human outrage at the IDF’s savagery, goes on to further muddy the waters by claiming that “it is unclear who was behind the incident”. In a similar vein, and using the headline, “Blasts kill 16 seeking shelter at Gaza school,” the NYT blames the “Blasts” rather than the Israeli army for the carnage. It places the responsibility for the massacre on Hamas. Earlier in the conflict, when shells fired by an Israeli gunboat killed four Palestinian boys who were playing on a beach, the NYT first reported the tragedy matter-of-factly with the headline, “Four Young Boys Killed Playing on Gaza Beach.” However, by 9:00 PM of that day (7/16/2014), it decided to sensor itself in favor of Israel and the headline was changed to “Boys Drawn to Gaza Beach, and Into Center of Mideast Strife.” The doctored headline appeared on the paper’s front page on July 17th. No whiff of Israeli culpability in the murder of these children remains in the revised headline of America’s “journal of record.” Most of the West’s “free press” feels quite free to spin the story of Gaza’s misery in favor of Israel. This is a fact of western journalism that is too well-known to the discerning reader. So, let me stop beating a dead dog, and consider some of Israel’s strategies and approaches to committing its latest atrocities in Gaza.

The most appalling of these is the “blame-the-victims” strategy. In response to the U.N. High Commissioner for Human Rights recent statement that there is "a strong possibility" that Israel was committing war crimes, Prime Minister Netanyahu first expressed his outrage at the accusation, and then suggested that the U.N. High Commissioner should launch “an investigation into Hamas’ decision to turn hospitals into military command centers, use schools as weapons depots, and place missile batteries next to playgrounds, private homes, and mosques”. His statement has, of course, been widely reported by the mainstream media in the West.  The Toronto Star columnist, Haroon Siddiqui, is one of the few who has ably taken the Prime Minister to task. Addressing the claim that Hamas is using Palestinian civilians as human shields by hiding its rockets and mortar shells among them, Siddiqui notes that even if it were so, the Israeli army “goes ahead and bombs them anyway.” He then turns to the assertion that Israel’s fight is with Hamas, not with the Gazan civilians.  He points out that in spite of this claim; Israel is doing a pretty impressive job of killing mostly civilians. It does so enthusiastically, even when these civilians try to hide in the ghetto’s hospitals, mosques, schools and residential neighborhoods.  Another strategy of the Israeli propaganda machinery—including the NYT, the Washington Post, the Wall Street Journal, and similar appendages of the Israeli propaganda machine—is to incessantly state that Israel takes every precaution to avoid or at least minimize civilian casualties. But even if this were true, writes Siddiqui, one must say that it has been failing miserably now, as it did in its previous attacks.

One of the ways that Israel tries to “minimize civilian casualties,” we are told, is to drop leaflets and issue recorded phone messages to Gazans that they should get out of their homes because they are about to come under fire. But given the fact that Gaza is one of the most densely populated parts of the world, it is not clear exactly where they are supposed to go when they leave their homes. As the fate of those who sought shelter at the U.N. school shows, there is no safe sanctuary for the Palestinians of Gaza. To find a comparable situation of utter vulnerability of the civilian population to harm, one must harken back either to the situation of the Warsaw Ghetto, where the Nazis herded the Jews and periodically attacked and slaughtered them, or to the besieged towns and villages of the medieval times.

The pitiable state of the residents of Gaza is unprecedented in the annals of modern warfare.  In every other modern battle—if shelling and bombing a densely populated city may be called either “battle” or “modern”—the civilians had the option of running away. They could leave their homes, farms, or cities, and flood into some safe haven or refugee camp. This was the case in Iraq, Sudan, Darfur, and in the war-torn regions of Western Europe during the Second World War.  Even the Bosnian Serbs allowed the women, children, and the infirm to escape to safety. No such “bleeding heart liberals” among the Chosen People. Gaza is walled on three sides on land, and fenced in by the Israeli navy from the sea. Its residents have nowhere to run.  As a result, the Israeli army, using its advance planes and arms supplied by the U.S., continues to murder civilians who madly dash about within the walls of their killing-fields, with the ease of shooting fish in a barrel.

The West and her allies have neither pity nor moderation. Their politicians are cynics, interested only in re-election, and the majority of their populations, a mindless mass of distracted zombies. It would be a fatal error for Iran or any other historical nation anywhere in the world to unilaterally disarm in the face of western pressure. Even if nuclear weapons are ruled out of their arsenals for moral reasons, nations that plan to survive the western juggernaut should maintain the capacity to make all attacks upon their regional interests extremely costly for the West, and for her local allies. In Iran, the liberal intellectuals who have bought into western powers’ candy-coated discourse about human rights and democracy should be mindful that when a beast bears its teeth, it is not smiling. The present state of the Gaza Strip is both a tragedy and a lesson.

*Mahmoud Omidsalar obtained his Ph.D. in Persian Literature from the University of California, Berkeley in 1984, and joined the Encyclopaedia Iranica as a consulting editor in 1990. He was appointed to the Supreme Council of the Center for the Great Islamic Encyclopedia (Tehran) In 2006. Together with the late Iraj Afshar, he edited the series Folia Medica Iranica and Persian Manuscripts in Facsimile. His most recent English books are: Poetics and Politics of Iran’s National Epic, the Shāhnāmeh (New York: Palgrave Macmillan, 2011), and Iran’s Epic and America’s Empire: A Handbook for a Generation in Limbo (Santa Monica: Afshar Publishing, 2012).

*Pre-emptive War with Iran and the Proverbial 800 Pound Gorilla: http://www.iranreview.org/content/Documents/Pre-emptive-War-with-Iran-and-the-Proverbial-800-Pound-Gorilla.htm

Republished with permission from Iran review