All humans alive today can claim a common ancestral link to some hominin. Hominins include modern humans, extinct human species, and all our immediate ancestors.

Recent discoveries of hominin remains, including the skull of a Homo erectus in South Africa, have generated high levels of interest from the public and scientific community alike.

Fossils hold invaluable information about human history. But digging deeper, there is much complexity around the question of what a “fossil” is, and who should be granted ownership of them. This is the topic of our latest research article published in the journal Heliyon.

The question of what qualifies as a “fossil” remains open. The Oxford dictionary defines fossils as:

the remains or impressions of a plant or animal embedded in rock and preserved in petrified form. 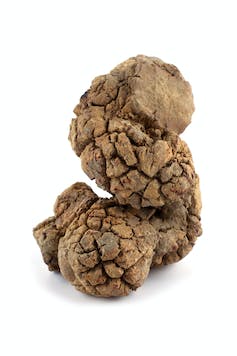 Dinosaur poo can become fossilised. This is called a coprolite. Shutterstock

But this definition doesn’t encompass the broader use of the word. Eggshells or coprolites (fossilised excrement) are neither direct remains nor the impression of an animal or plant, but archaeologists often refer to them as “fossils”.

The process of fossilisation can start immediately after an organism’s death, and the term “fossil” isn’t attached to a specific time period or state of preservation.

The term also relates to the perceived value, uniqueness or rareness of remains (and what they may reveal). Given such a breadth of meanings, it’s unsurprising attempts to regulate the status of fossils are fraught.

Hands off my fossil!

There was lively debate surrounding the 2015 discovery of Homo naledi in the Rising Star cave near Johannesburg, South Africa. The public’s access to the site and its fossils drew heavy criticism from researchers. This raised the question: should fossil discoveries be freely available? 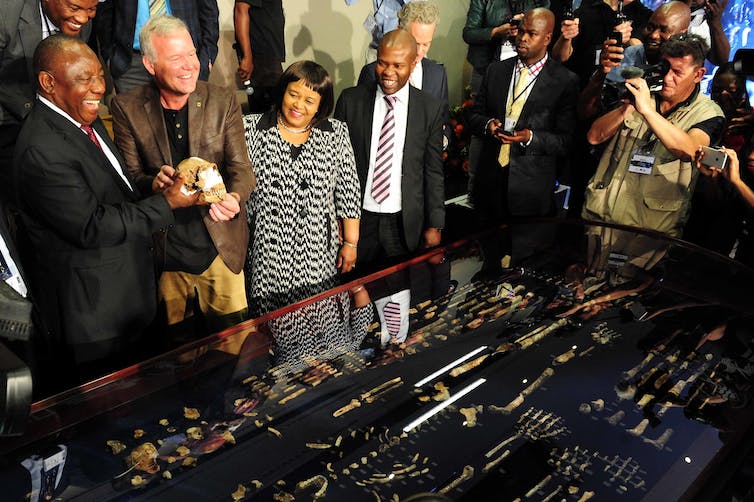 The announcement of the discovery of Homo naledi fossils in 2015 in South Africa was met with mixed responses from the research community. GovernmentZA / Flickr, CC BY-ND

Generally, around the world a person who excavates a fossil is allowed to keep it. Not only that, they can conduct potentially destructive analyses on it, and grant scientific and public access to the information it reveals.

Such practices can generate “gentleman’s club” syndrome, wherein members of scientifically influential groups have a better chance of accessing important fossils. But despite being accepted practice in the field, the “finders keepers” approach is legally problematic.

Read more: Homo naledi may be two million years old (give or take)

Humans and human remains have a special status in most nations’ legal systems. While animals can be owned, humans can’t. Compounding this, the definition of “human” is itself contested, and this muddies the legal waters when it comes to discovering archaeological human remains.

For instance, recent DNA discoveries of interbreeding between Homo sapiens, Homo neanderthalensis and Denisovans – as well as the fact that Homo naledi and Homo floresensis existed at the same time as modern humans – indicates scientists struggle to reach a consensus on where the boundaries of “human” lie.

The definition of “human” can also be culturally ascribed. Many indigenous peoples including communities from Australasia and Africa recognise an ancestral connection to species not always classified as Homo sapiens.

So what should be done with the fossilised remains of extinct species that aren’t “human” in the sense of belonging to Homo sapiens, but are nevertheless our evolutionary ancestors?

Are human remains things to be owned?

In Australia, as in most common law systems, there can be no “property” in a human corpse. While both burial and exhumation are regulated, ownership of a corpse is not.

The export of “Class A” cultural heritage, which includes human remains, is prohibited under the Protection of Movable Cultural Heritage Act 1986. Also, Australian state legislation regulating the scientific use of human tissue (such as the NSW Human Tissue Act 1983) doesn’t require any consent for samples excavated before 2003.

On the other hand, Australia also has a national repatriation program for Indigenous cultural patrimony. This program seeks to restore stolen human remains and sacred objects to their original communities.

The tension between scientific interests and spiritual beliefs is apparent in the context of repatriating human remains to Indigenous communities.

While fossilised human remains hold significant scientific value, their symbolic and spiritual value can’t be ignored, particularly to communities that feel a connection to them. Human remains would be best described as both scientific objects and also cultural subjects.

Read more: Africa's rich fossil finds should get the air time they deserve

Some scientists view repatriation and reburial of human remains as a deliberate destruction of a “source of information” that belongs to global humanity.

On the other hand, historical injustices and the imbalance of power between colonial entities and Indigenous people stand against such arguments. As a result, the repatriation and reburial of human remains becomes inseparable from broader legal arguments advanced by Indigenous peoples today.

Human, hominin and hominid fossils are far more than just objects to be owned. In fact, they reside at a contested and poorly regulated scientific, cultural and legal intersection.

We need common standards for ownership, protection and access controls. One solution would be to establish an international delegation with key stakeholders including scientists, lawyers, community representatives and policy makers.

Ideally, this could exist under the umbrella of the United Nations Educational, Scientific and Cultural Organisation (UNESCO). Such a body could foster constructive dialogue on how we value human fossils, and how we assign them ownership.