While Australians are singing the praises of the front-line workers during the COVID-19 crisis, there is a forgotten front line that has also made personal sacrifices to help us get through the pandemic: ABC journalists.

From radio producers to TV presenters to technicians who get up before dawn to bring us the news, ABC staff have been bringing us the facts about the global crisis at a time when misinformation and disinformation are rife and dangerous.

Less visible is the emotional toll on ABC staff of the relentless work in bringing us our stories about job losses, health concerns, social isolation and fragile mental health during the coronavirus pandemic.

As one ABC producer told me:

Every day during the lockdowns were sad stories that wear you down and leave you feeling hopeless.

Read more: Why the ABC, and the public that trusts it, must stand firm against threats to its editorial independence

We forget many of these workers went into the pandemic already tired and emotionally drained after forgoing holidays to report on the summer’s catastrophic bushfires across multiple states. The fires killed 34 people, destroyed more than 3,500 homes and ruined the lives of many. Yet, rather than forget these victims, ABC reporters continue to provide updates on how communities are rebuilding after losing so much in the fires.

Despite all of this, the federal government has offered no reprieve to prevent the axing of about 250 ABC jobs to meet a A$41 million budget shortfall of the Coalition’s own making.

The ABC’s managing director, David Anderson, announced the job cuts, some voluntary and some not, this week. The cuts will affect news, entertainment and regional divisions of the national media organisation.

This should be of grave concern for all Australians, because research shows we have local news “deserts” emerging across the nation, just as in the United States. This means some towns and regions have no original sources of news other than the ABC. Without it, they lose their voice altogether.

These ABC cuts come on the back of News Corp closing many of its regional mastheads and converting others to online-only. These moves raise concerns about issues of access to local news for some citizens such as the elderly and those with poor digital access.

Read more: Without local papers, regional voices would struggle to be heard

But it is also a threat to our democracy. Free and diverse media are central to a healthy democracy by providing citizens with reliable information in order to make informed choices, including at the ballot box when voters decide who will represent them.

The refusal of the Coalition government to step in and reverse the A$84 million lost in the 2018 budget cuts to the broadcaster – when indexing of the triennial funding agreement was frozen – can only weaken its public service.

Some might argue this is exactly what the government wants. Since 2014, when Tony Abbott was prime minister, the ABC has lost A$783 million in funding, including the A$84 million cut in 2018.

Politicians and journalists are strange bedfellows, as the saying goes. They both have important roles in democracies, sometimes at the expense of one another. Apart from the media’s important functions such as emergency broadcasting and informing the public, a well-functioning democracy depends on the public being able to monitor its representatives and on the state accepting criticism of its own exercise of power. This is its watchdog function, and to be effective it requires a trusted and independent media.

Yet, while the ABC is still Australia’s most trusted media outlet, public trust has been steadily falling since the budget cuts this decade (see the graph below). In other words, if you keep cutting the fat and hit the bone, the public will start to notice and lose trust in its quality. 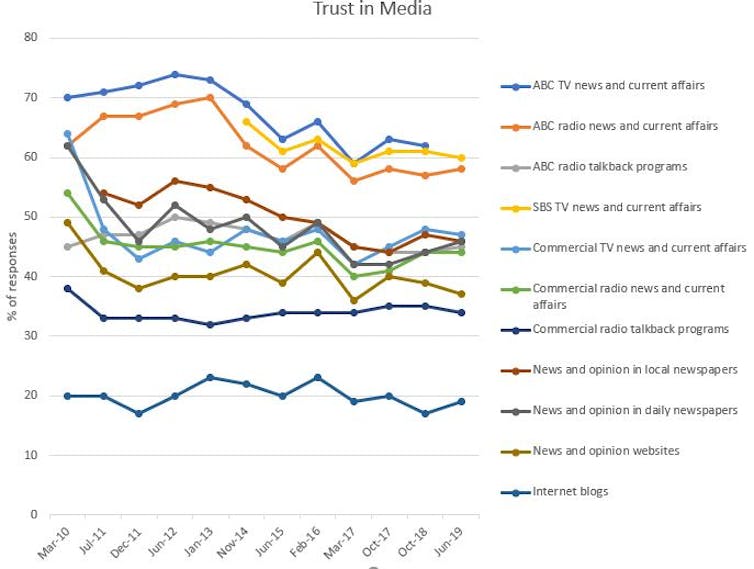 Author provided using Essential Media data 2011-2019 As this graph shows, the ABC’s most trusted programming, TV news and current affairs has been falling steadily from a high of 74% in 2012 to a low of 60% since the budget cuts. The other notable fall is trust in local newspapers, from 62% to below 50% since the “news desert” concerns have been realised with mass closures of local papers. This is a problem for democracy, particularly when the rise of fake news in the digital age is causing concern for most Australians (65%) about what is fact and what is not. Yet, when we need to know information because it is important to our health – such as during the COVID-19 pandemic or bushfires – quality outlets have been enjoying a spike in their audience numbers. Our survey work has also shown Australians’ trust in professional journalists has been elevated during this period (68%). It’s notably higher than in the US (57%) where trust in professional journalists has been ebbed away by President Donald Trump’s weaponisation of the terms “fake news” and “lamestream media” against them. As the 2009 Victorian Bushfires Royal Commission heard again and again, if it were not for the ABC emergency broadcasting, many communities would have not been warned of approaching fires. If the ABC is there to inform us to save lives, who will save the ABC?