New Zealand’s 2020 general election will be like no other in our history.

It comes in the wake of a remarkable government-led act of collective solidarity that has sacrificed businesses and livelihoods in the cause of protecting those who would have been most vulnerable to COVID-19: the old, those with health conditions, disadvantaged people in crowded housing, Māori and ethnic minority communities.

By a combination of luck and good crisis management, the elimination policy has worked. New Zealand is among the first COVID-hit countries to return to near normality.

In the process, the popularity of Jacinda Ardern and her government has soared. The initial response to a crisis of this magnitude tends to raise support for governments. But in New Zealand the increase has been stratospheric, raising Labour’s support to levels as high, if not higher, than for any party since the advent of the Mixed Member Proportional electoral system.

In countries where the policy response has been poor and the virus untamed we can expect to see governments lose their lustre. But this is much less likely in New Zealand. Only a small minority of New Zealanders doubt the need for the government’s strong policy response or the evidence of its success.

Nevertheless, with June 10 marking 100 days until the election we can expect to see Labour’s wide lead in the polls erode. The questions to ask are: by how much, and for what reasons? 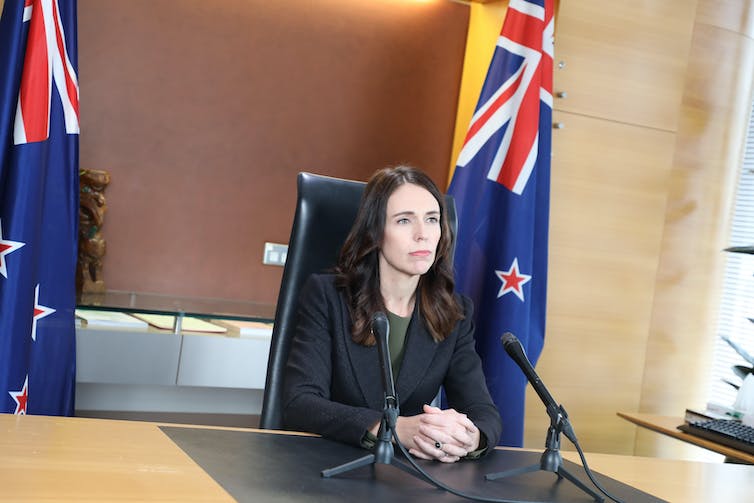 Labour competence has won over conservatives

Research conducted by the New Zealand Election Study identifies two ideological dimensions behind party choice. The first is the balance between state and market in public policy. It’s a perennial debate between left and right that (despite claims to the contrary) hasn’t gone away.

The second is based on other values: a liberal desire for freedom to pursue one’s own choices versus a conservative desire to maintain social cohesion and conformity with traditional community norms.

While these dimensions are semi-independent, on balance liberals are more likely to be on the left, and conservatives on the right. Conservatives greatly value strong leadership and naturally tend towards the National Party.

Those with conservative values who lean to National, but not strongly, are those most likely to have joined the Labour camp in recent polling, a hypothesis borne out by recent COVID-19 psychological research. This showed a higher level of patriotism post-lockdown, “along with higher levels of institutional trust in science, government, police and health authorities”.

The government has led an outstanding example of social cohesion. Provided Labour can continue to project an image of competent command and control over a crisis that has not ended, many of those conservatives may remain with Labour, perhaps for longer than a single election.

Will voters blame economic shock on the government?

In the depth of the crisis, attacks on the government were, for the most part, tempered. As the crisis has ebbed, however, criticism has become more acceptable. The National Party (having changed leaders in response to plummeting polls) is increasingly attacking the government’s competence. That the target is Labour’s cabinet rather than Ardern herself helps explain the challenge National faces. 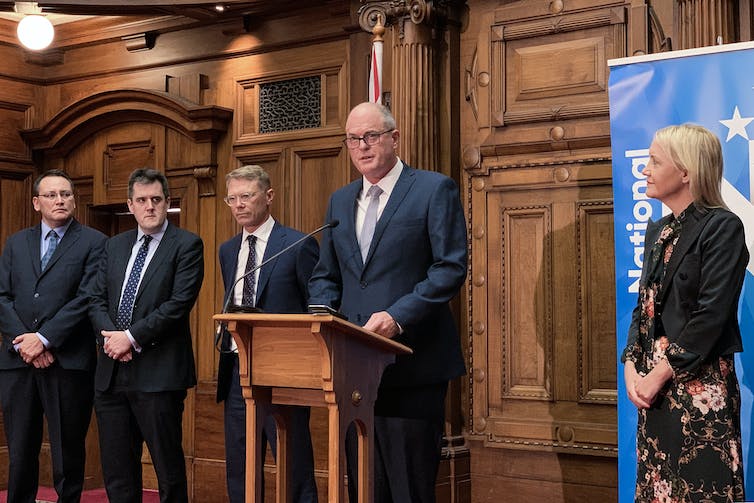 New National Party leader Todd Muller and shadow ministers: targeting government competence is the strategy, but is it enough? AAP

Meanwhile, the unity of the coalition is dissipating as New Zealand First seeks to raise its profile and retain its parliamentary seats (which current polling suggests are at risk). The image of competent control is under attack from that direction, too.

The state of the economy by mid-September will be the other key variable. It’s true that governments can stand and fall on the performance of their economies, but not always.

There are two schools of thought among those who study economic voting. The sceptics argue that voters are myopic, if not entirely blind – they will blame or reward governments for externally generated downturns or upturns for which the government cannot reasonably be blamed or given credit.

The downstream economic damage caused by COVID-19 will therefore ultimately be sheeted home to the governments in office at the time, regardless of their performance.

Other researchers argue that voters are capable of extracting a “competency signal” from governments and can therefore tell the difference between what a government cannot control and what it can. In particular, they can assess the effectiveness of the government’s response to an unexpected shock.

As always, the cues and impressions that feed people’s perceptions over the coming weeks will shape the election outcome. 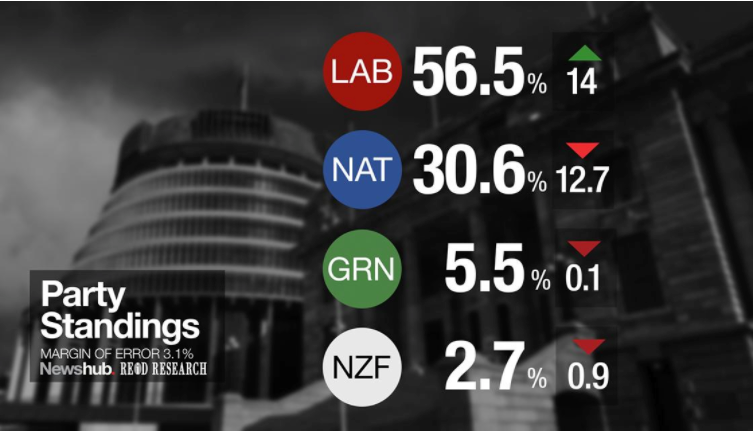 The first of two polls in May showing Labour capable of governing alone without coalition partners were the same results achieved at the election. Screenshot/Newshub-Reid Research

Is history a guide?

The first Labour government was elected in 1935 after the depression of the 1930s. It governed effectively and established a system of social security that briefly led the world.

Its reward was a relatively long period of government and a wave of respect and affection for Labour’s first prime minister, Michael Joseph Savage. His framed photograph could be found on the wall of many working-class homes well into the 1960s.

The extraordinary events of the past few months have set the scene for another potential reward for exemplary leadership – an outcome deeply feared by Labour’s opponents. Potentially, it could lead to another long period of Labour-led governments and the crowning of Jacinda Ardern as one of New Zealand’s greatest prime ministers.

Or not. If a week is a long time in politics, 100 days is an eternity.