Fossilised footprints and tracks provide a direct record of how ancient animals moved. And some preserved behaviours leave us marvelling in disbelief.

In research published today in Scientific Reports, my international team of colleagues and I detail our discovery of exquisitely preserved crocodile footprints, formed about 120 million years ago in what is now Sacheon, South Korea.

The ancient footprints uncovered resemble those made by humans, as they are long and slender, with a prominent heel impression. But they have additional features, including thick scaly imprints from the sole and toes that are comparatively long with broader impressions.

The shape of these footprints compares very well with crocodile tracks known elsewhere, notably Batrachopus tracks from the Jurassic found in the United States – with “Batrachopus” being the name assigned to the tracks themselves. 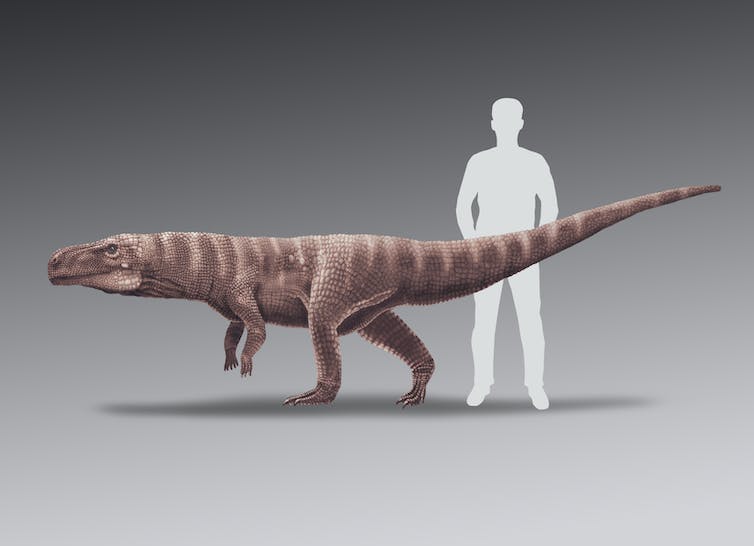 A reconstruction of the ancient landscape of South Korea with crocodile trackmakers. Anthony Romilio, Author provided (No reuse)

However, instead of being made by quadrupedal, cat-sized crocodiles, the Sacheon fossil tracks are large. With footprints that measure around 24 centimetres long, they come from animals with legs the same height as human legs and bodies more than three metres long.

Today, crocodiles walk on four legs in a wide, squat stance. The Sacheon crocodile trackways we discovered indicate a different pattern of movement. They do not have “handprints”, and the trackways are exceptionally narrow, as if the animals were making the footprints while balancing on a tightrope.

This suggests these ancient crocodiles had their legs tucked beneath their body, much like a dinosaur, rather than assuming the typical sprawling posture seen in today’s crocodiles.

The tracks could not have been made by dinosaurs. One clear difference between dinosaur and crocodile tracks is that crocodiles walk flat-footed, leaving a clear heel impression. Dinosaurs and their bird descendants walk high on their toes, with the heel off the ground.

The devil is in the detail

Fossil tracks can be found in many different states of preservation, ranging from excellent to comparatively indistinct. This can make it hard to accurately identify the animals that made them. 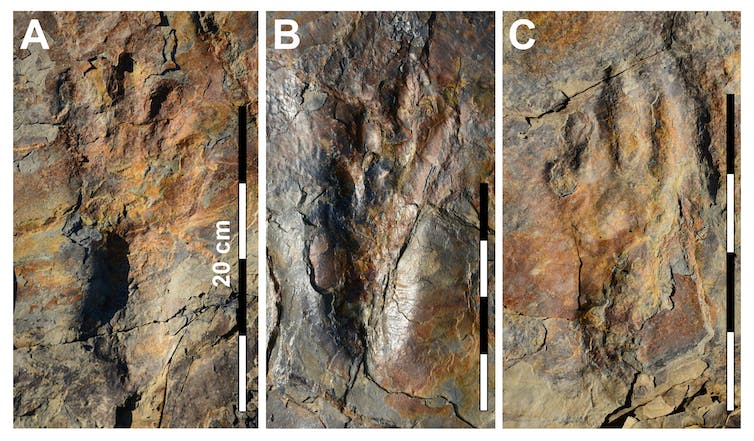 Often, track sites are either not composed of sediments that help retain the finer features of tracks, or they erode after lengthy exposure to the elements.

We know the Sacheon trackmakers were ancient crocodiles because the tracks have been preserved in extraordinary detail.

This is due in part to fine, muddy sediment around an ancient lake that was able to hold the footprints while covered by sediment-laden water. Also, the site was freshly excavated for a new rural building development and hadn’t been exposed to erosion.

The perfectly preserved Sacheon tracks became our reference to reassess other unusual trackways that had been described in the area, but were more poorly preserved.

Our attention focused on sites at Gain-ri and Adu Island just ten kilometres away from Sacheon, that had eroded trackways within the intertidal zone, between the low and high tide. These narrow trackways with long, slender footprints but no hand prints or tail drag marks echoed the Sacheon crocodile tracks.

A decade earlier, the footprints had been interpreted as made by another ancient animal known as a pterosaur. This ancient winged creature – related to dinosaurs but not officially classified as one – was famed for ruling the skies when dinosaurs ruled the land.

Read more: Humans coexisted with three-tonne marsupials and lizards as long as cars in ancient Australia

Crocodiles and pterosaurs were quite distinct, being predominantly land and air dwellers, respectively. They had very differently shaped hands, but interestingly, the impressions they left with their feet can look very similar.

When pterosaurs were on the ground, they typically walked on all fours, using their back feet and hands to support themselves as they moved, just like today’s crocodiles.

However, as the “pterosaur” Gain-ri and Adu Island trackways lacked hand prints, they indicate bipedal walking. Thus, the tracks were wrongly ascribed to a pterosaur.

When first discovered, pterosaur tracks were known to be very common in South Korea, while crocodile tracks were rare. In the absence of well-preserved footprints, the preferred interpretation was that these tracks were likely evidence of unusual behaviour of the pterosaur, a common trackmaker in the area.

With the new evidence from the Sacheon site, it became possible to reevaluate the Gain-ri and Adu Island trackways too, which we now suspect were made by the same crocodile trackmakers strolling around Sacheon 120 million years ago.