In 2016, the mobile game Pokémon Go sent hundreds of millions of players wandering the streets in search of virtual monsters. In the process it helped popularise augmented reality (AR) technology, which overlays computer-generated imagery on real-world environments.

Now Pokémon Go is set to take AR to a new level. A new feature within the game will encourage players to create and upload 3D scans of real-world locations.

Together, we’re building a dynamic, 3D map of the world so we can enable new kinds of planet-scale AR experiences.

And it’s not just Niantic. In February, Facebook acquired Scape Technologies, an AR start-up that was creating a 3D map of the entire world, and Microsoft’s Minecraft Earth AR mobile game touts the same kind of planet-scale AR play.

These scans, and this type of data collection, will likely affect all of us in the near future.

Turning data collection into a game

One reason for Niantic’s huge success has been how it uses digital games to collect data about the world.

Niantic was initially formed as Keyhole Inc by John Hanke in 2001 with backing from the CIA’s tech venture capital firm, In-Q-Tel. The company developed mapping technologies used by the US military in the early 2000s.

Keyhole Inc was acquired by Google in 2004, and was instrumental the development of Google Maps. In 2010, Keyhole was rebranded as Niantic and focused on games. It stayed part of Google until 2015, when it became an independent company again.

In 2012 Niantic launched a game called Ingress, which saw players photograph and upload millions of locations of interest that became “portals” within the game. 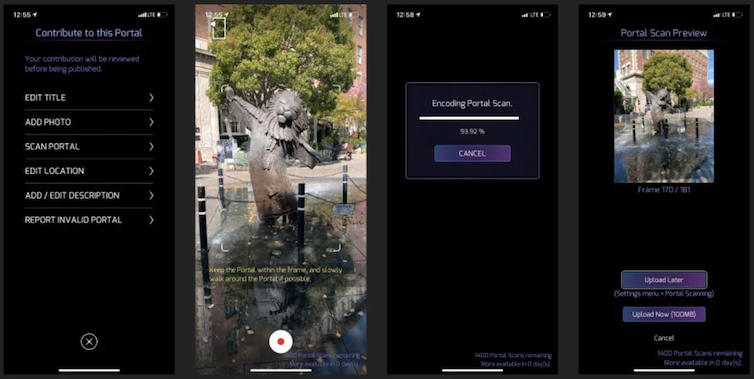 Screenshots of the Ingress Portal Scan Feature, via Niantic. Brian/Niantic

These portals became the underlying infrastructure that powers Pokémon Go and other games, but just as valuable was the data collected about how players moved around the world while playing.

Niantic’s latest game, Harry Potter: Wizards Unite, collects each player’s location every five seconds or so, which is often enough to recognise individual behaviour patterns and detect intimate details of their life.

Tech companies and investors think this kind of data is immensely valuable. In December 2019, Niantic raised funds at a valuation of USD$3.9 billion.

Read more: Explainer: what is surveillance capitalism and how does it shape our economy?

The future of reality is augmented

The 3D scans Pokémon Go players are collecting are intended to create new possibilities in the game, but they will also give Niantic’s platform for AR developers an advantage over competitors.

Having a system that can recognise 3D environments around the world makes it easier for developers to make shared AR experiences and environments that “exist” even when the user logs off.

Apple, Facebook, Microsoft and Google are all developing AR products that are likely to depend on a technique called simultaneous localisation and mapping or SLAM to continuously scan – and collect data about – the users’s physical environment.

The next iPhone is rumored to have a powerful LiDAR scanner to create more detailed 3D scans, and better support Apple’s AR ecosystem.

Facebook acquired the virtual reality (VR) company Oculus in 2014 for USD$2.3 billion, and Mark Zuckerberg frames success with VR as being key to the company’s AR ambitions.

This is well exemplified in LiveMaps, a technology demonstrated by Facebook’s Andrew Bosworth at the 2016 Oculus Connect developer conference.

Facebook’s LiveMaps tech demo depicts the types of experiences that could be possible with ubiquitous AR, but also hints at the amount of data technology companies will need to hold about our homes and lives to function.

Any system like LiveMaps will demand constant collection of finely detailed data about the users’ home and everything in it:

AR glasses will scan the surroundings to create a live dynamic index amplified by crowd-sourced data, allowing the maps to recognise when things have changed and update automatically.

The implications of augmented reality

What will pervasive augmented reality mean? Beyond relatively benign possibilities such as more targeted advertisements, we need to think critically about the consequences of technologies like these before they are firmly entrenched.

As the Australian futurist Mark Pesce has argued;

“by virtue of the way they operate, augmented reality systems must simultaneously act as very sophisticated surveillance systems”.

Ever-growing unregulated collection of spatial data across the globe has the potential to create powerful systems of surveillance, control, and influence. We have examined this potential in detail in a recent report on the ethical implications of emerging mixed reality technologies.

Better to prevent than to cure

We are also already seeing the rapid growth of an AR industry which doesn’t (at least solely) sell to the commercial market, instead selling to workplaces, law enforcement, security agencies and the military. 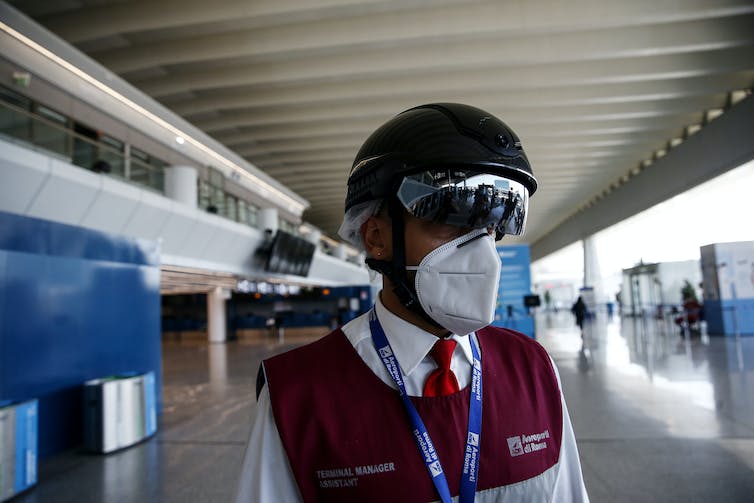 AR smart helmets in use in Italy during the Covid-19 pandemic. These devices can scan crowds of people and trigger an alarm, despite the limited evidence supporting temperature screening as a preventative measure. The same devices have automatic facial recognition modes and other surveillance capabilities. LaPresse / Sipa USA

As the Cambridge Analytica scandal showed, the dangerous impact of emerging technologies is often only realised once they have done some damage.

If what we share on social media can be used to influence elections, what might the data about the contents of our home be used for? Or everything we encounter in a given day?

Let’s take these technologies for what they really are: not just for entertainment, but apparatuses for extracting data and accumulating power and profit.

Read more: We need to talk about the data we give freely of ourselves online and why it's useful