The community had more than 7,000 active users per day (although this has previously been much higher). The ban was on the grounds that some posts incited violence, and the community had engaged in harassment on other subreddits. It will have removed hundreds of thousands of posts, and millions of comments going back many years.

The “r/The_Donald” subreddit is a themed, online message board where users can submit, comment and vote on posts. The decision to ban it comes as several other platforms censure racist and violent material from Trump and his supporters.

Twitter recently fact-checked some of Trump’s posts, video live-streaming service Twitch has temporarily banned the president’s account, and Facebook is now losing advertisers over its unwillingness to moderate hateful material and disinformation, including from the president. 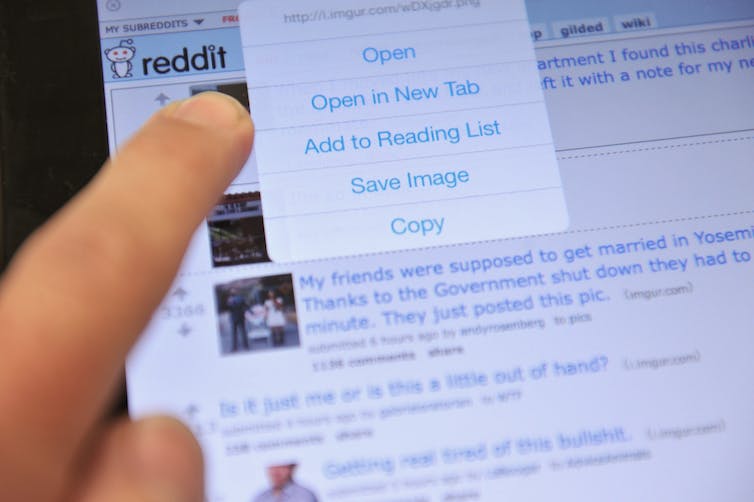 According to the New York Times, Reddit also banned another 2,000 communities across the political spectrum alongside the pro-Trump community, including left-leaning groups.

But while some may celebrate these actions, the moves should be understood within the context of a largely deregulated information economy, in which “doing good” is mostly about “doing well”. In other words: making money.

Upon a close look, the removal of r/The_Donald exposes the inadequacies of market-based information governance. Even in cases where individual governance decisions benefit society, the information economy remains primarily motivated by profit.

Started in 2015, r/The_Donald was the largest and most controversial subreddit dedicated to supporting Trump. Before the ban, it had more than 790,000 subscribers and was at times one of the most popular subreddits on the platform.

In June last year, Reddit “quarantined” the subreddit over posts inciting violence. Several months later it purged most of the community’s volunteer moderators, arguing they weren’t upholding the platform’s policies, particularly through allowing banned content to stay up.

Historically, the platform has sold itself as a democratic space for free speech, with administrators resisting censorship in favour of a hands-off philosophy. However, like other platforms, Reddit now faces pressure from advertisers that don’t want their brands associated with political extremism.

Advertising is a growing part of Reddit’s economic model. And with major partners such as L'Oréal and Audi, advertisers’ preferences undoubtedly hold sway in how the website is regulated.

What makes it (Reddit) attractive to consumers, which is the free and open ability to post, makes them scary to advertisers.

For major social media platforms, content regulation is a delicate issue, teetering on a balance between value and liability.

Reddit’s laissez-faire approach and community-led model invites broad participation and has helped its user base grow. However, this also fosters content that’s distasteful, unseemly and potentially dangerous – creating brand associations many advertisers would rather avoid.

The r/The_Donald subreddit embodies this tension. Reddit’s gradual regulation of it, and eventual banning, indicates the value-liability balance has tipped towards the latter.

While there is reason to laud these regulatory shifts, they are products of political-economic realities, rather than social priorities. And they speak to a much broader issue of information policy in contemporary society.

Although social media platforms are central to civic discourse, they’re also products in a competitive market economy. As long as that market economy remains deregulated by governments, individual companies will have outsized power.

They may use their power for social good, but this decision will be market-based, and thus can change with the winds of financial promise.

Much of Reddit’s popularity has come from its status as the “wild west” of the internet.

The platform’s new approach may alienate its more dedicated user base. In trying to balance the ethos of free speech with increasing pressure to regulate, Reddit finds itself stuck between a rock and a hard place.

And as Reddit moves to moderate and ban hateful content, more extreme users are going elsewhere. Prior to the r/The_Donald subreddit’s banning, participants had already established their own external site and were encouraging others to move there.

Similarly, moderators on the quarantined r/MGTOW (an anti-feminist men’s rights subreddit) are now directing subscribers to a Discord channel – a community-based discussion app for private and public interaction.

Moderators of the quarantined r/TheRedPill (another anti-feminist men’s rights group) have been directing users to an external site for over a year.

Users leaving for external sites will reduce hateful content on Reddit, but will concentrate this hate elsewhere. And such sites are often far less regulated than larger platforms.

How to prevent distilled anger

Reddit’s move highlights the influence of economics in platform governance – and the vulnerabilities that arise from this.

Rather than individual moderation decisions, what’s needed is a broad regulatory framework that holds corporate bodies to account. We need to reconsider “safe harbour” laws that protect social media companies from legal liability.

More broadly, we need to recognise social media are entangled with civic society, and enact social policies that coincide with the weight of that responsibility.