Tensions over border closures are in the news again, now states are gradually lifting travel restrictions to all except Victorians.

Prime Minister Scott Morrison says singling out Victorians is an overreaction to Melbourne’s coronavirus spike, urging the states “to get some perspective”.

Federal-state tensions over border closures and other pandemic quarantine measures are not new, and not limited to the COVID-19 pandemic.

Our new research shows such measures are entwined in our history and tied to Australia’s identity as a nation. We also show how our experiences during past pandemics guide the plans we now use, and alter, to control the coronavirus.

Read more: National and state leaders may not always agree, but this hasn't hindered our coronavirus response

In early 1900, bubonic plague broke out just months before federation, introduced by infected rats on ships.

Journalists called for a broader inoculation campaign and the government soon faced a “melee” in which:

…men fought, women fainted and the offices [of the Board of Health] were damaged.

The health board openly criticised the government for its handling of the quarantine measures, laying the groundwork for quarantine policy in the newly independent Australia.

Quarantine then became essential to a vision of Australia as an island nation where “island” stood for immunity and where non-Australians were viewed as “diseased”.

Public health is mentioned twice in the Australian constitution. Section 51(ix) gives parliament the power to quarantine, and section 69 requires states and territories to transfer quarantine services to the Commonwealth.

Ports then became centres of immigration, trade, biopolitics and biosecurity.

In 1918, at the onset of the Spanish flu, quarantine policy included border closures, quarantine camps (for people stuck at borders) and school closures. These measures initially controlled widespread outbreaks in Australia.

However, Victoria quibbled over whether NSW had accurately diagnosed this as an influenza pandemic. Queensland closed its borders, despite only the Commonwealth having the legal powers to do so.

Read more: This isn't the first global pandemic, and it won't be the last. Here's what we've learned from 4 others throughout history

When World War I ended, many returning soldiers broke quarantine. Quarantine measures were not coordinated at the Commonwealth level; states and territories each went their own way. 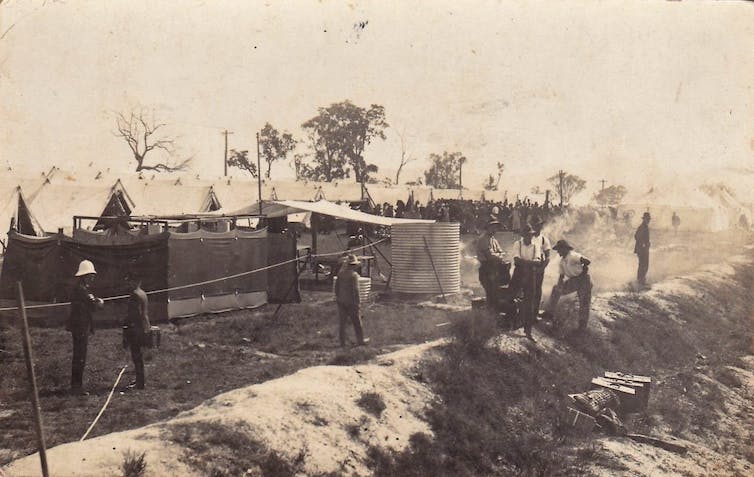 Quarantine camps, like this one at Wallangarra in Queensland, were set up during the Spanish flu pandemic. Aussie~mobs/Public Domain/Flickr

Over the next seven decades, Australia linked quarantine surveillance to national survival. It shifted from prioritising human health to biosecurity and protection of Australia’s flora, fauna and agriculture.

In the 1990s, new human threats emerged. Avian influenza in 1997 led the federal government to recognise Australia may be ill-prepared to face a pandemic. By 1999 Australia had its first influenza pandemic plan.

The next threat, 2004 H5N1 Avian influenza, was a dry run for future responses. This resulted in the 2008 Australian Health Management Plan for Pandemic Influenza, which included border control and social isolation measures.

Which brings us to today

While lessons learned from past pandemics are with us today, we’ve seen changes to policy mid-pandemic. March saw the formation of the National Cabinet to endorse and coordinate actions across the nation.

Read more: Coronavirus has seriously tested our border security. Have we learned from our mistakes?

Then there are border closures between states and territories, creating tensions and a potential high court challenge.

Border quibbles between states and territories will likely continue in this and future pandemics due to geographical, epidemiological and political differences.

Australia’s success during COVID-19 as a nation, is in part due to Australian quarantine policy being so closely tied to its island nature and learnings from previous pandemics.