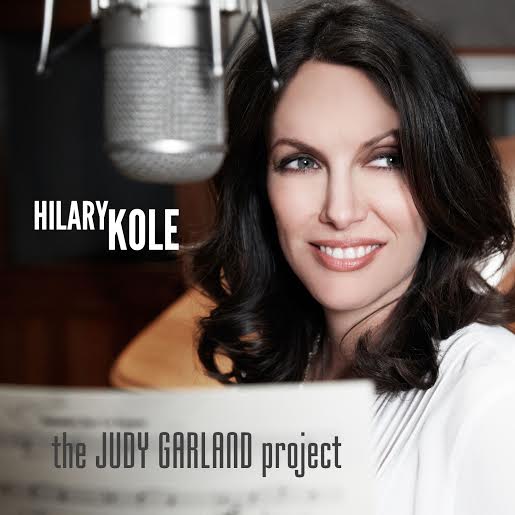 Long a beloved staple on the NYC jazz scene and world-renowned as a multi-faceted concert hall and symphony performer, Hilary Kole has emerged triumphantly from a difficult three-year legal struggle to put out a recording – and found her true musical heart in the process. On her new independent full-length album, the acclaimed vocalist and musician paints A Self-Portrait with illuminating stylistic brushstrokes and an expansive repertoire that takes her far beyond her storied roots as a purveyor of the Great American Songbook. Back, better than ever and baring her jazz and pop soul like never before, Hilary celebrates life free of limitations and full of optimism.

So personal and intimate that it could only be a self-produced project, A Self-Portrait – recorded and co-produced by famed engineer Jim Czak at legendary Nola Studios, where Hilary recorded her first demo at 14 – features the singer working with her longtime bandmates Paul Gill (bass), John Hart (guitar) and drummer Aaron Kimmel, along with pianists Tedd Firth, John DiMartino, and cellist Agnas Nagy. Together they uncover new emotional dimensions in tunes that she sees as personal snapshots of her life that also communicate deeper universal truths. Having always felt more connected to the sound of her live performances than to her previous studio recordings, Hilary took an organic approach to recording in line with the way she sings when an audience is present. Her interpretation extends to her own masterful arrangements of 11 of the songs. Credited also as arrangers are Firth (“Lemon Twist”), Rich DeRosa (“The Man I Love,” and co-arranged with Kole “Some Other Time”), and Misha Piatigorsky (“50 Ways to Leave Your Lover.”)

Those who don’t know the backstory that Hilary brings into A Self-Portrait will still experience an artist who makes fresh, freewheeling choices and whose artistry is constantly evolving and dedicated to, as she says, “opening up the vault a little.” On this collection, that translates to a spirited variety of Songbook classics and obscurities, a batch of hits from the 60s and 70s pop landscape and the glorious mid-90s inspirational gem from Elvis Costello and Burt Bacharach, “God Give Me Strength.” All of these are Hilary favorites that she has worked into her recent repertoire. Collectively, they parallel her personal arc these past few years from frustration and despair to determination and hope.

Songbook choices include the opening track “While We’re Young,” “When The World Was Young” (featuring English lyrics by Johnny Mercer and whose Blossom Dearie interpretation especially inspired Hilary), Cole Porter’s “It’s Alright With Me,” “I Remember You” (lyrics also by Mercer, previously recorded by everyone from Ella Fitzgerald to Diana Krall), the cabaret classic “Come a Little Closer,” Bobby Troup’s clever swing tune “Lemon Twist,” the Gershwins’ “The Man I Love” and the lush, melancholy closer “Some Other Time” from Leonard Bernstein’s musical On The Town. The 60s and 70s gems include Stevie Nicks’ Fleetwood Mac ballad “Landslide,” a crafty take on Paul Simon’s “50 Ways to Leave Your Lover” (including unexpected high-register wordless vocal runs), an understated journey down Joni Mitchell’s “River” and a heartrending take on The Beatles’ “And I Love Her.”

As the title of the generous 14-track collection implies, Hilary brings a truly inspiring personal and professional background to A Self-Portrait. The New York native, who studied composition at Manhattan School of Music, started her professional singing career at the legendary Rainbow Room.

In addition to performing at famed Manhattan venues like Town Hall, Birdland, Blue Note, Iridium, 54 Below, Jazz at Lincoln Center and Carnegie Hall (with Michael Feinstein and The New York Pops), she made her concert-hall debut at Lincoln Center as part of the “American Songbook Series.”

In June 2007, she appeared at Carnegie Hall in a tribute to Oscar Peterson, a performance reprised in January 2008 at the Canadian Memorial to Dr. Peterson at Roy Thompson Hall alongside Quincy Jones, Herbie Hancock and Nancy Wilson.

Globally, she has since headlined at the Umbria Jazz Festival, the Montreal Jazz Festival, the Nairn Jazz Festival, and the Cotton Club and Blue Note in Japan. She followed her 2009 debut album Haunted Heart (produced by and featuring jazz-guitar great John Pizzarelli), a Gold Disc Award winner in Japan, with You Are There, an ambitious compilation featuring vocal-piano duets with legendary pianists Dave Brubeck, Michel Legrand, Benny Green, Cedar Walton, Hank Jones, Kenny Barron, etc. which won a New York Bistro Award for record of the year, and received national recognition as a USA Today Best Album of the Year.

Despite these accolades, during her unexpected forced hiatus there were times when Hilary felt like she had lost a part of herself—but as she says, “Through this darkness, I have learned so much about myself and about the world.” Explaining her natural evolution from her strictly jazz/Songbook roots, she takes a probing look at where she’s been and where she’s headed. “Each song I chose for A Self-Portrait has a significant meaning to me and has in one way or another shepherded me through the darkest moments of my life.”

“They’re songs that tap into everyone’s desire to not only feel better, but make things better,” she says. “When I sing them – both here and on stage – I feel liberated and empowered. They’re my way of acknowledging how hard it is sometimes to live, to love, to grow up and to evolve—and these songs express my determination to get through these difficult times. Everything starts sitting at the piano, studying a song’s sheet music and finding the musical expression I am looking for to best fit the lyrics. To me, A Self Portrait is about being in the moment, in the most real way possible. I think it is the most authentic recording that I have ever done – yet.”

Hilary’s time away from recording gave her a chance to take stock of her deepest passions and longings as a performer and interpreter. “I had the opportunity to look at who I am as an artist, and realize that I cannot pretend to only be one thing,” she says. “I am, like most artists, many things – or maybe just one thing that cannot be classified. A Self Portrait represents more of who I am. I once thought I had to sing in a box, sing a certain way. I now realize that for me that would be the safe road, but not the truest road.”

That path includes a deep love for a wide range of influences, from Cole Porter to Maria Schneider to Celtic chants, Bohemian rhapsodies, Samuel Barber, the Rolling Stones and Fun. It’s also taken Hilary in unique thematic directions over the years as she debuted at the Oak Room at the Algonquin Hotel as the co-writer and star of the critically acclaimed, Off Broadway revues Our Sinatra and Singing Astaire. Hilary’s latest tour de force is a symphonic tribute to the music of Judy Garland; she has already performed this multi-faceted orchestral show with symphonies around the country, and has a national tour planned for 2015.
Her choice to include “River” on this album offers a glimpse into her next large-scope undertaking: a new show based on the music of Joni Mitchell.

“The beauty of A Self Portrait is that it’s an honest musical glimpse into this moment of my life, looking back on a hard time but from the perspective of having made it through to a bright, exciting present and future,” she says. “It was such a hard road to travel to win the ability to get this out there, so the seemingly simple task of just walking into the vocal booth in the studio and doing the first take was both the hardest and most liberating thing I’ve done in my life. It was a very emotional experience, an opportunity to pour three years of held-back emotion and passion into a true labor-of-love project. I have nothing but gratitude for my family, friends and fans who have shared with me their unconditional love and support – and for my wonderful band who stayed by my side through it all and captured my vision so beautifully throughout.”

A great singer is a method actor. Within each song is a role, a character. And what we refer to as interpretation is acting. The caveat of course is, to ring true and be believable, it has to be real. The actor must reach down to the deepest depths and up to the highest heights of her own experience to deliver a performance that completes the electrical/emotional circuit of truth.

Hilary Kole, on this stunningly fresh collection of performances of songs from the well-worn repertoire of Judy Garland, reveals and brings new life to the emotional core of each tune while revealing herself as a consummate interpreter. A goddess, wielding lightning bolts of electricity and emotion that break through the clouds and reach our very souls. While never attempting to imitate Garland, she succeeds in telling Judy’s story — relaying the joy of falling in love, the hope that love will prevail, the heartbreak when love fails. And most importantly, the gathering of the will and desire to pick oneself up again to give it one more try.

Accompanied by pianist John DiMartino, bassist Paul Gill, and drummer Aaron Kimmel, this album cooks. These are swingin’ jazz interpretations, loaded with improvisation and solos, like a late-night set in a smoky Village jazz club. The ballads luxuriate you in washes of tone and texture, then wrap you in vocal and instrumental silks and satins.

The song choices are based on Hilary’s successful live performances of the Judy canon, her “Over The Rainbow” tribute concerts held the world over. It was fresh from a series of these performances in Japan that Hilary came to the studio, bringing the energy and vitality of the live concert hall into the studio on Manhattan’s Lower East Side. With the tape machine rolling, Hilary and the boys performed at a remarkable level of focus and concentration; a well-oiled jazz machine of intricate interplay and in-the-moment flourishes that only those well versed in the language of jazz can provide.

And then, finally the icing on the cake: Hilary Kole’s stunning interpretation of the most famous song of all. The signature tune that followed Judy through her whole life, changing meanings constantly from her teen years through her battles with demons of all kinds. The song that was almost cut from its famous movie because it was “too sad”. The song written in 1939, as World War II was brewing in Europe, the Great Depression was in full swing here at home, and storm clouds were gathering. It is from that starting point that Kole sat with pen to paper and began writing her remarkable string quartet arrangement to that remarkable song. In her equally stunning vocal performance, she embodies every measure of despair — yet every measure of hope — the composers intended. It is a show stopper.
The album you hold in your hands in the work of a true artist in every sense of the word. It is an honor and privilege to have captured these performances, and to share them with you now.