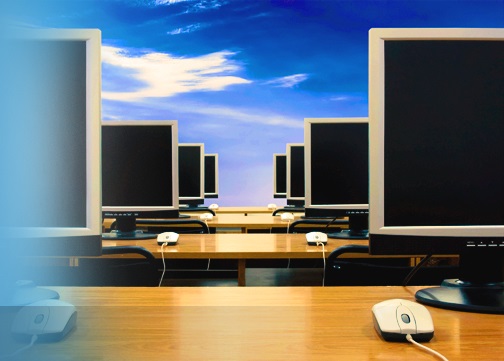 September 2, 2014 - Calgary, AB -- High-performance workstations are essential to the success of most call centers, but as call centers around the world face continual pressure to reduce costs and improve performance, traditional computing approaches place are too costly. AMJ Technologies, an IT support company based in Las Vegas, NV, has adopted Userful virtualization software to reduce the cost of its computing infrastructure and improve performance and quality control.

The simplest and most flexible virtual desktop solution, the all-in-one Userful VDI software appliance leverages zero client devices to replace physical PCs, saving an average of 60% of hardware and 90% of electricity costs. From a single Core i7 PC, Userful offers concurrent use of different operating systems including full Microsoft™ Windows desktops and free, integrated desktops such as Chrome-based cloud-client, Linux, signage solutions and desktops delivered through Remote Desktop Protocol (RDP). The browser-managed Userful solution takes virtualization beyond the desktop, and can also be used to power interactive touch displays, digital signage and video walls.

AMJ Technologies has been installing Userful Multiplatform in call centers to set up fleets of workstations, and is now able to offer multiple desktop environments for each agent, but at a fraction of prior costs. Andrew Johnson, owner of AMJ Technologies, has been extremely pleased with choosing Userful Multiplatform because of it's of simple set up, affordability and high performance.

"Userful is the only software that does what it can do with very simple installation. The first station I configured was up and running within a half an hour," Johnson said. "Once it's configured you don't have to worry about it -- it just works."

Call centers of any size can take advantage of the Userful Multiplatform solution and its flexibility in order to better equip agents, improve customer service, and reduce overall costs. With Userful Multiplatform, a standard PC server can power multiple desktops along with additional digital displays, such as touch screens and digital signs. All displays can be customized with a choice of operating systems, all managed from a central application.

Johnson said that he was pleased that the solution was simple for his company to implement, and they will continue to recommend Userful Multiplatform to call centers, and other businesses, because it's a solution that works.

"It allowed us to use the existing infrastructure without requiring more resources like wiring, networking, or power. Using a traditional method, we would have needed extra power, materials and resources, let alone our extra time," Johnson added. "Userful Multiplatform is an out of the box idea that just really clicks and makes so much sense. Why didn't someone think of this before?"

"Traditional VDI is typically a poor fit for most call centers both because of the high costs and the inherent audio latency issues in traditional VDI solutions that make real-time audio an ongoing challenge," said Tim Griffin, Userful CEO. "Userful's local appliance model solves both the cost and latency challenges giving call centers a simple, cost effective and flexible way to modernize or expand their desktop infrastructure"