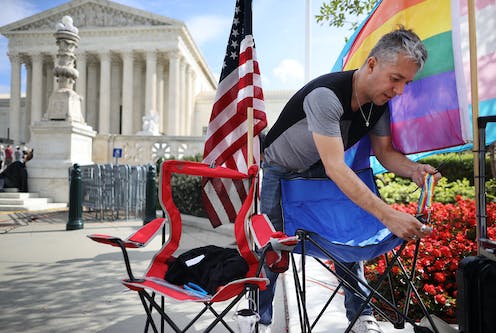 But buried towards the end of a 33-page majority opinion written by conservative stalwart Justice Neil Gorsuch is a sober warning that those celebrating the decision might have initially missed.

In his reading, the religious beliefs of an employer may “supersede” the Title VII protections now being extended to the LGBTQ community in its resolution of Bostock v. Clayton County. It is an issue that courts will likely have to decide on a case-by-case basis in the future. But Gorsuch notably referred to the Religious Freedom Restoration Act, passed by Congress in 1993 to protect an individual’s practice of their faith, as a “super statute” and emphasizes the court’s mandate to uphold “the promise of the free exercise of religion enshrined in our Constitution.”

In short, Gorsuch’s caveat means that discrimination against LGBTQ people in the workplace may be far from over. In fact, discrimination on the basis of sexual orientation and gender identity may even be legally protected under the basis of protecting the free exercise of religion.

In addition to the Religious Freedom Restoration Act, 21 states have religious exemption laws that could conflict with the Supreme Court’s ruling in defense of LGBTQ worker rights. For instance, Mississippi HB 1523, implemented in October 2017, allows people who have “the sincerely held religious beliefs” that marriage “should be recognized as the union of one man and one woman” and that “gender” refers to “biological sex determined at birth” not to provide services, including housing and employment, to LGBTQ people. That may protect religious employers who choose not to hire or to fire an employee who is LGBTQ. 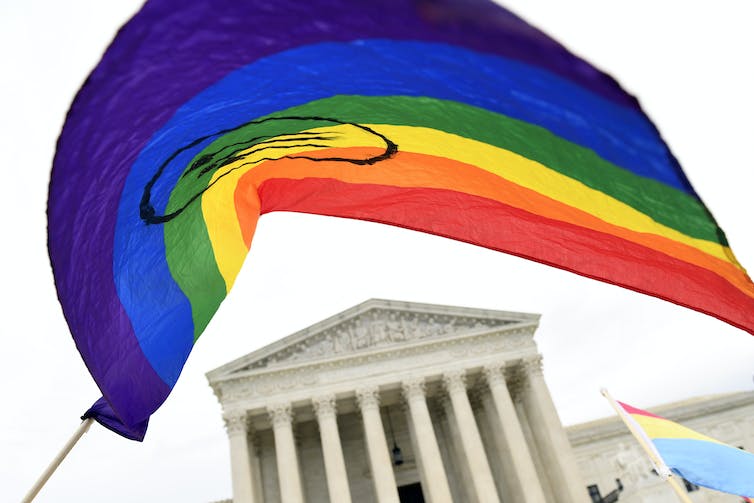 A rainbow flag flies over the Supreme Court.AP Photo/Susan Walsh

As sociologists who have spent the last four years studying people’s beliefs about LGBTQ nondiscrimination and religious exemption laws, we have observed how public debate on the issue has centered around the perceived views of two groups: conservative white evangelical Christians and LGBTQ people. Our research has found that both groups frame the issue as a fight against discrimination.

One of 26 states without a law prohibiting employment discrimination on the basis of sexual orientation or gender identity, Nebraska is directly affected by the Supreme Court’s Bostock ruling.

But despite its population trending conservative, Nebraskans displayed widespread support for LGBTQ rights. Our results indicate that about three out of four Nebraskans support legal protection for gays, lesbians and transgender individuals from job discrimination and oppose giving religious business owners the right to refuse service to customers based on their sexual orientation.

A majority of those we surveyed who identified as Trump voters or who were frequent church attendees did support the right of a religious business owner to refuse service to someone who is gay or lesbian. But even in this group, 62% also said they supported LGBTQ nondiscrimination laws.

But by analyzing over 900 open-ended responses justifying positions on LGBTQ protections and religious exemption laws, we found that respondents – regardless of their position on the matter – justified their views by saying they were rejecting unequal treatment.

For example, some respondents who opposed laws protecting LGBTQ individuals in the workplace explained that “there should never be any type of discrimination” or stated “we are all equal.” This group frequently suggested that since equality has already been achieved in America, sexuality and gender identity should not be given special protection.

Respondents disagreed over who is at risk of receiving unfair treatment in the debate over nondiscrimination laws – people who are religious or LGBTQ individuals. As one respondent who opposed religious freedom laws wrote, “I oppose because I don’t want someone’s religious beliefs to determine how I or my family live our lives. Why are their beliefs more important than mine?”

This statement is remarkably similar to one written by a respondent who supports religious freedom laws: “No one (either side) should be forced to do something they don’t believe in, that makes them very uncomfortable.”

Both sides of the debate over religious freedoms and LGBTQ rights use the language of equality and opposition to discrimination. But they have different perspectives on how these fundamental American values play out in the public sphere.

Now federal law protects both the free exercise of religion and LGBTQ individuals from discrimination on the basis of sexual orientation and gender identity.

As Gorsuch alluded to in his majority opinion, these two seemingly contradictory protections are likely to collide with one other in the future. And it will again be left to the courts to decide whose claim to protection has the greater validity.