Curious Kids is a series for children of all ages. If you have a question you’d like an expert to answer, send it to curiouskidsus@theconversation.com.

What is the slowest thing on Earth? – Jiwon, Brookline, Massachusetts

In the words of the infamous villain, Dr. Evil: “Lasers.”

Lasers focus a narrow, directed beam of light on a specific spot, making them a great tool for cutting, burning, welding – or in the case of Dr. Evil, shooting enemies from atop a shark. These activities all produce or require heat. Laser beams travel at the speed of light, more than 670 million miles per hour, making them the fastest thing in the universe.

So how does a laser produce the slowest thing on Earth?

First, it’s important to understand the relationship between an object’s temperature and its speed. The hotter something is, the more energy it has and the faster it moves. Even things that appear to be perfectly still – say, a pen or your notebook – are not. On a microscopic level, the particles they’re made of are moving rapidly. This is even true of living beings.

Let’s use the sloth as an example. If you zoom in on the molecules that make up this famously slow animal’s body, you’ll see them behaving like kids jumping around inside a bounce house. Why? About 70% of this creature’s body is made up of water and those water molecules are bouncing around at hundreds of miles per hour.

So it might seem surprising that I use bright, intense lasers to cool things down in my lab experiments. I am a physicist who is interested in how atoms and molecules behave at the very coldest temperatures. It’s a strange world where quantum mechanics rules. In this realm, particles sometimes behave like waves in the ocean, and believe it or not, can sometimes be in two different places at the same time.

To study this extraordinary behavior, I use lasers to produce clouds of frigid atoms that are the coldest things on Earth – which we call Bose-Einstein condensates. When you cool a bunch of atoms down to almost absolute zero, the coldest possible temperature, atoms start to obey quantum mechanics and behave in surprising ways.

Studying ultra-cold atom clouds might provide clues about how other weird materials, like superconductors, work. Superconductors carry electricity much better than existing materials, so well that they may someday be used to build super high-speed trains. 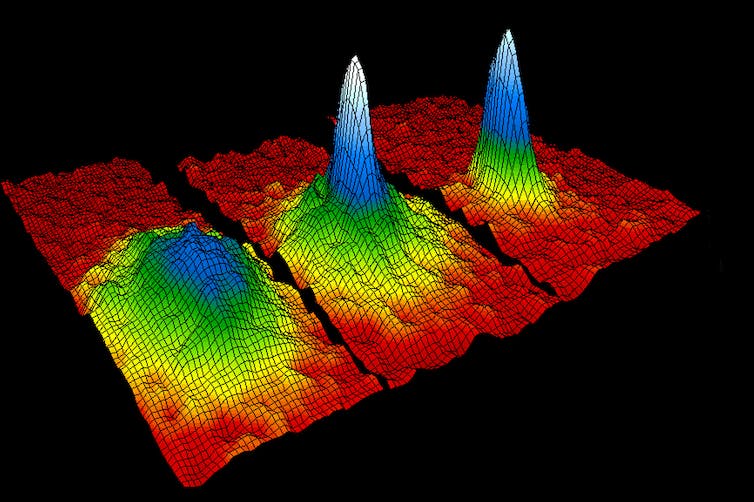 In 1995, researchers cooled atoms lower than ever before and created a new state of matter that had been predicted by Albert Einstein. This graphic shows snapshots as the atoms condensed from more spread-out red, yellow and green areas into very dense blue and white areas.NIST/JILA/CU-Boulder

Creating the slowest thing on Earth

So how exactly do lasers chill out a cloud of atoms? In the lab, we start by shining lasers at atoms of a silvery-white metal called ytterbium. These atoms, which are really hot, are held inside a 1-foot-wide chamber. But after a few seconds under the laser beam, they cool off, slow down and become trapped together in the center of the chamber.

How does this happen? All light, including a laser, is made up of photons, which are packets of energy that are constantly moving. When we shine a laser into our chamber, the atoms collide with streams of photons in the beam and slow down and get colder – like what would happen if you tried running really fast against a strong wind.

These little collisions bring the temperature of the atom cloud down to just a few millionths of a degree above absolute zero. That’s 459 degrees below 0 degrees Fahrenheit.

But that’s still not enough to give this cloud the prize for being the slowest thing on Earth. It takes one last step to make it just a little colder, a technique we physicists call “evaporative cooling.”

First, we capture all the atoms, sometimes using a magnetic field made by running electricity through a wound-up wire. This creates an invisible well that holds the atoms: Picture marbles sitting at the bottom of a bowl. Then we lower the sides of this bowl-shaped force field by decreasing the electric current that runs through the wire. That allows the faster, warmer atoms to zoom out of the “bowl” and escape the trap.

Only the slower atoms are left behind – and they are truly beyond freezing: one-tenth of one-millionth of a degree above absolute zero. The atoms in this cloud move in slow motion: If they traveled in a straight line instead of bouncing around, it would take them an entire hour to travel across a room. For comparison, the molecules in your body could dash across that room in just a fraction of a second.

The atoms in our frigid atom cloud quite literally move at less than a snail’s pace – and that cloud is the slowest thing on Earth.

Hello, curious kids! Do you have a question you’d like an expert to answer? Ask an adult to send your question to CuriousKidsUS@theconversation.com. Please tell us your name, age and the city where you live.

And since curiosity has no age limit – adults, let us know what you’re wondering, too. We won’t be able to answer every question, but we will do our best.

Katie McCormick does not work for, consult, own shares in or receive funding from any company or organisation that would benefit from this article, and has disclosed no relevant affiliations beyond their academic appointment.