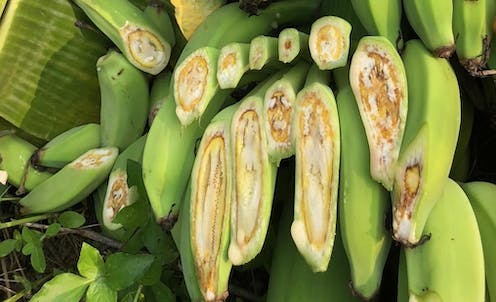 Many of the pathogens threatening the world’s major crops and food security are either fungi or fungus-like organisms known as oomycetes. In a recent study published in the journal Nature Communications, researchers found that these microorganisms have the ability to rapidly adapt to environmental conditions and to the plant hosts they infect. This finding adds to growing concerns around these types of pathogens, which could become harder to control in both agriculture and forestry. 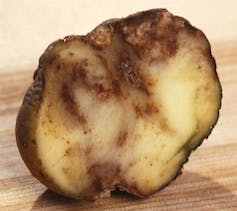 Potato infected with the oomycete Phytophthora infestans. This oomycete was the cause of the Irish potato famine that led to the starvation and death of more than 1 million people in the 19th century. Phytophthora infections cause annual damages that amount to billions of U.S. dollars.Wikipedia

To understand why only certain organisms are pathogens and others are not, ecologists like to think of each organism’s lifestyle or “ecological niche.” An organism’s niche is a space defined by its relationship to other organisms, such as the host organisms it interacts with, and preferred environmental conditions, such as temperature and humidity. For example, the oomycete Phytophthora infestans that causes potato late blight thrives at lower temperatures, around 15 degrees Celsius, whereas Botryosphaeria fungi causing apple “bot rots” prefer temperatures around or above 25°C.

While the ecological niches of many plant and animal pathogens are well understood, this is not the case for microbial pathogens, such as fungi and oomycetes. To begin filling this gap, the new study synthesized and analyzed temperature and host plant range data from hundreds of fungal and oomycete pathogens.

But an even bigger surprise came when the researchers discovered that the two traits, temperature range and plant host range, did not correlate with one another. Thus, crop pathogen lifestyles cannot easily be grouped into general categories, such as generalists that grow in a wide range of temperatures and infect many plant hosts, and specialists, which is the opposite. What’s more, the new study found that both temperature range and plant host range change rapidly during evolution. 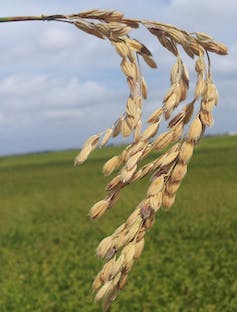 Knowledge that crop pathogens exhibit diverse ecological lifestyles and evolve rapidly is decidedly not good news for our crops and global food security. On a planet where the climate is changing, highly adaptable pathogens are likely to be harder to control. In addition, much of the world relies on an outdated system of agriculture that favors monoculture and reliance on fungicides to which pathogens quickly evolve resistance. This combination make for a deadly mix, with new outbreaks of emerging plant diseases on the rise.

We still know little about the ecological niches of microbes. Examining host range and temperature, two important traits to the lifestyles of crop pathogens, is but the first step. In the future, researchers will need to examine additional facets of the ecological niches of these pathogens, such as humidity or competition with other organisms, which will be key for understanding why some microbes are pathogens and others are innocuous.

Antonis Rokas and his laboratory receive or have received funding from the National Science Foundation, the John Simon Guggenheim Memorial Foundation, the Burroughs Wellcome Trust, the National Institutes of Health, the Beckman Scholars Program, the March of Dimes, the Howard Hughes Medical Institute, and Vanderbilt University.