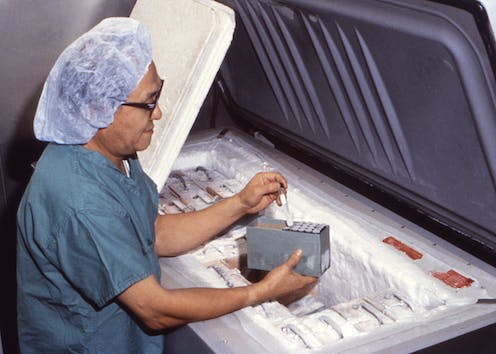 Today smallpox can only be found in deep freeze inside a few highly secured laboratories, like this one at the CDC in 1980.CDC, CC BY

Smallpox was a terrible scourge on humanity, killing hundreds of millions of people over the centuries. But its origin remains obscure. Egyptian mummies from 3,000 to 4,000 years ago, including that of Pharaoh Ramses V, have pox-like skin lesions, but did they have smallpox? Recent genomic evidence puts that in doubt. 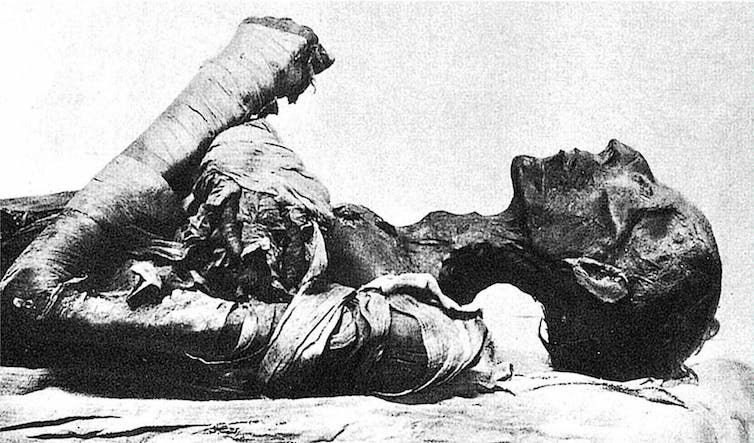 Mummy of Pharaoh Ramses II, believed by some to have died of smallpox in 1214 B.C.Photo 12/Universal Images Group via Getty Images

Whether or not ancient plagues were truly smallpox, by the 18th century the disease was endemic throughout the world. The widespread introduction of effective vaccination in the 19th century diminished – but did not eliminate – smallpox in the western world, and it persisted in many areas well into the 20th century.

I’m a microbiologist interested in how diseases jump from animals to humans and then evolve. Smallpox raged for centuries but was eradicated 40 years ago. While the idea of completely eradicating a disease has obvious appeal during the current pandemic, differences between the smallpox and SARS-CoV-2 viruses suggest that the path to ending COVID-19 pandemic will not be the same.

Wiping a virus from the face of the Earth

Smallpox is caused by a virus called variola. Although the primary route of infection is inhalation, the characteristic skin pustules are also filled with the virus. As long ago as the 10th century the Chinese knew that a person scratched with the pus from a pox sometimes gained immunity. It was, however, risky as some recipients developed smallpox and died.

This procedure, called variolation, was brought to Europe in the early 1700s. Later that century, English doctor Edward Jenner discovered that inoculation with a closely related virus, cowpox, also conferred immunity to smallpox but was much safer. Called vaccination, after “vacca,” the Latin word for cow, the process has remained essentially the same to the present.

In 1959, the World Health Organization initiated a program to eradicate smallpox worldwide, but the effort didn’t really get underway until 1967. 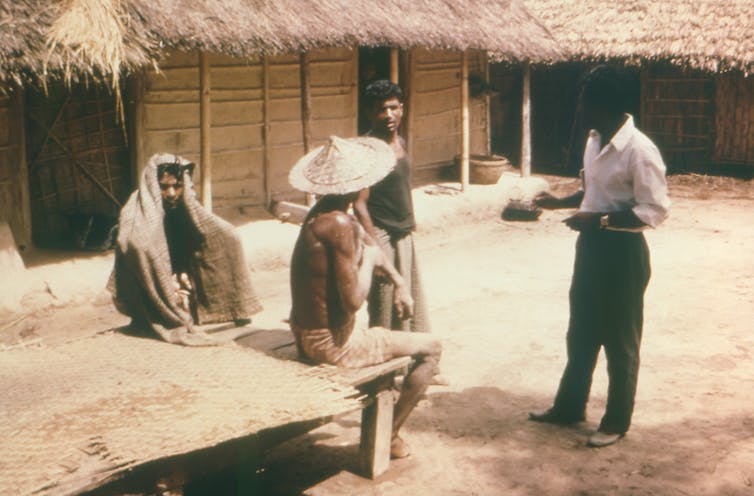 The program’s intensified vaccination efforts employed a new technique called circle vaccination, which consists of surveillance and containment; when people in a community came down with the disease, health workers would try to vaccinate all their contacts to stop the spread of the virus.

Containment worked because people infected with the smallpox virus do not pass it on until they exhibit obvious symptoms. This is in contrast to SARS-CoV-2, which can be spread by infected people long before they develop symptoms, if they ever do. Surveillance and containment of cases, which was so successful for smallpox, may be less so for COVID-19 due to its asymptomatic spread.

The last known natural case of smallpox occurred in Somalia in 1977, and in May 1980 the World Health Assembly declared the disease officially eradicated. And that was the end of smallpox in the wild. 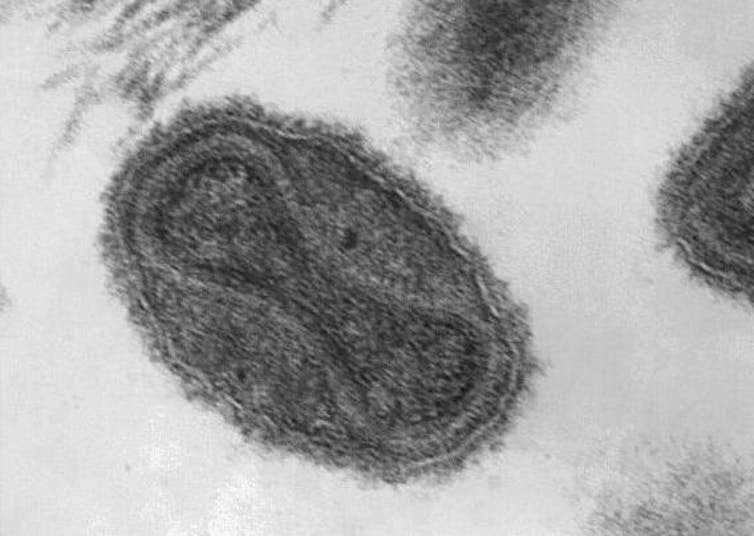 Under a magnification of 370,000X, the dumbbell-shaped viral core of the smallpox virus is visible; it contains the viral DNA.CDC/Dr. Fred Murphy; Sylvia Whitfield, CC BY

Deducing smallpox’s evolution from its genes

Variola is very different from SARS-CoV-2, the virus causing the current COVID-19 pandemic. The variola genome consists of double-stranded DNA, which is more stable and gets copied more accurately when the virus replicates than do single-stranded RNA genomes, such as that of SARS-CoV-2. Consequently, the rate of genetic changein variola is much lower. Although estimates vary, the evolution rate of the variola genome is at least 15-fold lower than that of SARS-CoV-2.

However, variola’s evolutionary history with humans is far longer than that of SARS-CoV-2; exactly how long is the subject of ongoing research. To reconstruct the evolutionary history of smallpox, scientists need to compare the DNA from virus samples preserved at various times.

After eradication, scientists destroyed all known existing samples of variola except for 571 live samples that had been collected in the preceding 30 years. They’re kept at two secure facilities, one in the U.S. and one in Russia.

Scientists have sequenced genomes from about 50 of these samples. They’ve also isolated variola DNA from a few accidentally preserved human remains. To date, the oldest of these is the mummified remains of a Lithuanian child who died between 1643 and 1665. It’s still unknown whether the pox-like diseases described in ancient texts or observed on Egyptian mummies were actually smallpox.

With viral DNA sequences in hand, scientists can construct genetic family trees by analyzing the small changes – mutations – that accumulated in the genes while the viruses were circulating in the human population.

Whether using just the DNA from the 20th-century variola strains, or including the viral DNA from the 17th-century Lithuanian mummy, researchers estimate the rate of change of variola strains to be one or two mutations per year. Previous estimates incorporating historical records had been as low as one-twentieth of this rate.

The more rapid mutation rate predicts a few things. It means the available modern variola strains shared a common ancestor only 400 years ago; the two great clusters split only between 200 and 300 years ago; and strains within the two clusters began to diverge about 100 years ago. 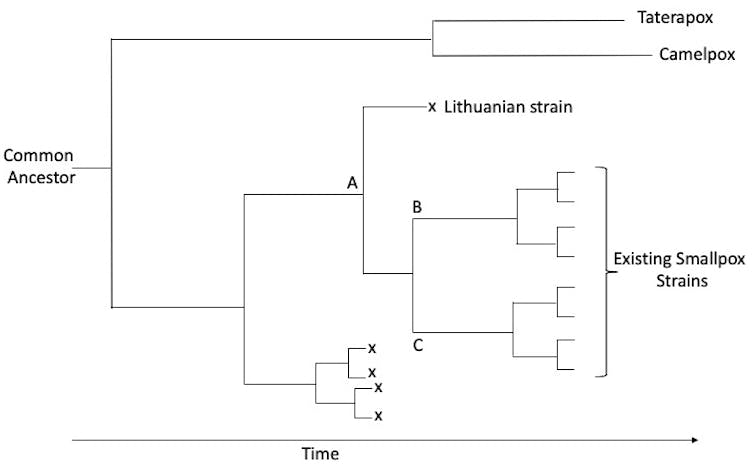 Model phylogenetic tree illustrating how an ancestor, A, could have led to the current two groups of smallpox strains, B and C. It’s possible other strains went extinct (x) and their remains are yet to be discovered. Horizontal lines represent the strain lineages and branch points represent genetic divergence.Loosely based on Duggan et al, 2016 https://doi.org/10.1016/j.cub.2016.10.061, CC BY-ND

When and how did smallpox appear in people?

If the existing variola strains appeared only a couple of centuries ago, that’s clearly inconsistent with reliable historic records of earlier smallpox outbreaks. There are two possible reasons for this discrepancy, both of which may be true.

First, the recent viral strains might have evolved more rapidly than older strains. That is, the estimated evolution rate might not be applicable across the entire history of the virus.

Second, older strains of the virus may have disappeared, leaving no progeny to be collected in the 20th century. The rise of vaccination in the 19th century may have driven these other strains to extinction. That would leave only the one strain that gave rise to the two major groups that then diverged into the modern strains.

So, how did the original strain first make it into the human population?

Variola virus belongs to a family of pox viruses that are widespread among mammals, and most with broad host-ranges. For example, cowpox infects cows, humans, cats, dogs and zoo animals, including the big cats. Variola, however, infects only humans.

At the level of their DNA, variola’s two closest relatives are camelpox, which infects only camels, and taterapox, whose only known host is an African gerbil. One interpretation of this family tree is that these three viruses emerged from a common ancestor, probably with a broad host range, about 3,000 years ago. The three viruses then independently narrowed their host range as they adapted to their new hosts, losing many of the genes that allow pox viruses to infect other host species.

Not all scientists who study the evolution of variola agree with this simplified scheme, arguing that the information gained from the available viral genomes cannot be extrapolated to the timing or the sequence of events that led to the original appearance of variola in people. 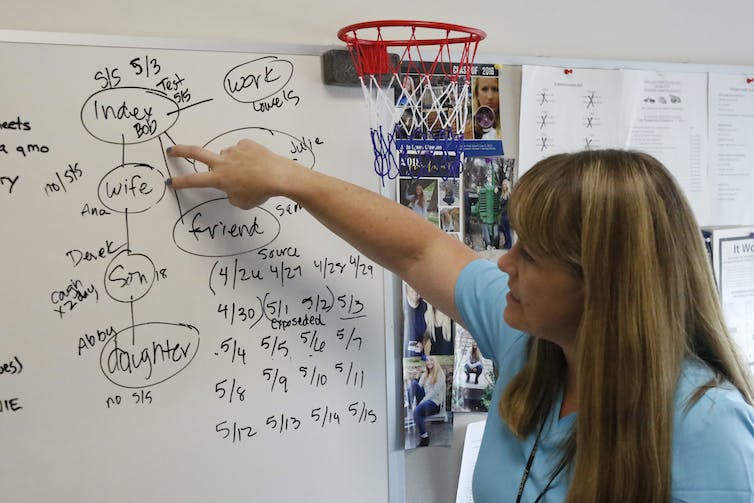 Contact tracing is much trickier for a virus like SARS-CoV-2 that doesn’t always cause obvious symptoms in those it infects.AP Photo/Rick Bowmer

Few similarities between smallpox and COVID-19

In addition to the differences between the viruses, the diseases that they cause are also very different, making the techniques used to eradicate smallpox less useful for the COVID-19 pandemic.

Smallpox is highly lethal; as many as 30% of people infected with the major form of variola die, but survivors have lasting immunity. In contrast, best estimates put the death rate of COVID-19 at 1% or less, and it is not known if infection produces lasting immunity.

People infected with smallpox do not spread it until symptoms appear, at which point they are so sick as to be bedridden, whereas COVID-19 can be spread by infected people who have no symptoms. Within a community this asymptomatic spread of COVID-19 may account for more than 40% of secondary cases.

Historical records show that less virulent strains of smallpox appeared at various times, a few of which survived into the 20th century. A highly virulent pathogen may lose its virulence over time if rapidly disabling or killing its host limits its rate of transmission. However, because COVID-19 is spread by both asymptomatic and symptomatic people, there would appear to be little advantage for SARS-CoV-2 to evolve to be less virulent.

Surveillance and containment of cases, which was so successful for smallpox, also is less likely to work for COVID-19.

Our best hope is for an effective vaccine to stop the COVID-19 pandemic, just as it stopped smallpox.