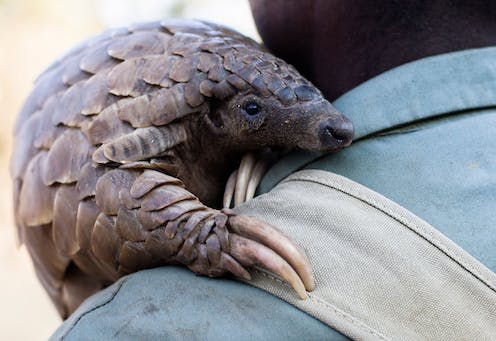 Pangolins have been found with covonaviruses that are genetically similar to the one afflicting humans today.Jekesai Njikizana/AFP/Getty Images

The coronavirus pandemic, suspected of originating in bats and pangolins, has brought the risk of viruses that jump from wildlife to humans into stark focus.

These leaps often happen at the edges of the world’s tropical forests, where deforestation is increasingly bringing people into contact with animals’ natural habitats. Yellow fever, malaria, Venezuelan equine encephalitis, Ebola – all of these pathogens have spilled over from one species to another at the margins of forests.

As doctors and biologistsspecializing in infectious diseases, we have studied these and other zoonoses as they spread in Africa, Asia and the Americas. We found that deforestation has been a common theme.

More than half of the world’s tropical deforestation is driven by four commodities: beef, soy, palm oil and wood products. They replace mature, biodiverse tropical forests with monocrop fields and pastures. As the forest is degraded piecemeal, animals still living in isolated fragments of natural vegetation struggle to exist. When human settlements encroach on these forests, human-wildlife contact can increase, and new opportunistic animals may also migrate in.

The resulting disease spread shows the interconnectedness of natural habitats, the animals that dwell within it, and humans.

Yellow fever, a viral infection transmitted by mosquitoes, famously halted progress on the Panama Canal in the 1900s and shaped the history of Atlantic coast cities from Philadelphia to Rio de Janeiro. Although a yellow fever vaccine has been available since the 1930s, the disease continues to afflict 200,000 people a year, a third of whom die, mostly in West Africa.

The virus that causes it lives in primates and is spread by mosquitoes that tend to dwell high in the canopy where these primates live.

In the early 1990s, a yellow fever outbreak was reported for the first time in the Kerio Valley in Kenya, where deforestation had fragmented the forest. Between 2016 and 2018, South America saw its largest number of yellow fever cases in decades, resulting in around 2,000 cases, and hundreds of deaths. The impact was severe in the extremely vulnerable Atlantic forest of Brazil – a biodiversity hotspot that has shrunk to 7% of its original forest cover. 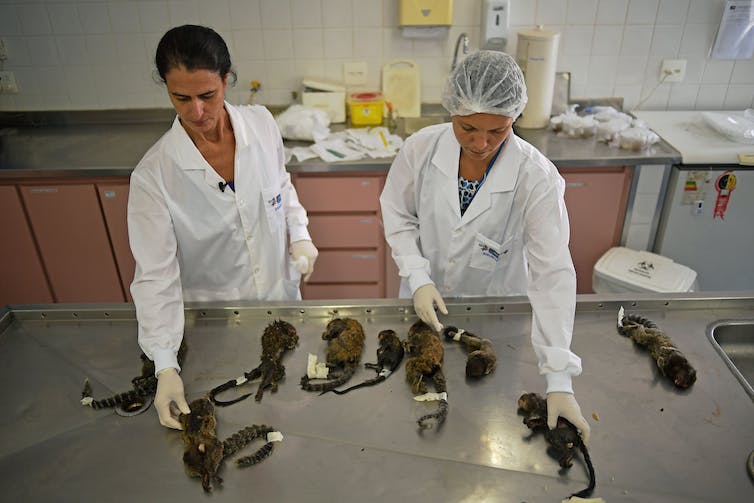 Shrinking habitat has been shown to concentrate howler monkeys – one of the main South American yellow fever hosts. A study on primate density in Kenya further demonstrated that forest fragmentation led a greater density of primates, which in turn led to pathogens becoming more prevalent.

Deforestation resulted in patches of forest that both concentrated the primate hosts and favored the mosquitoes that could transmit the virus to humans.

Just as wildlife pathogens can jump to humans, humans can cross-infect wildlife.

Falciparum malaria kills hundreds of thousands of people yearly, especially in Africa. But in the Atlantic tropical forest of Brazil, we have also found a surprisingly high rate of Plasmodium falciparum (the malaria parasite responsible for severe malaria) circulating in the absence of humans. That raises the possibility that this parasite may be infecting new world monkeys. Elsewhere in the Amazon, monkey species have become naturally infected. In both cases, deforestation could have facilitated cross-infection.

We and other scientists have extensively documented the associations between deforestationand malariain the Amazon, showing how the malaria-carrying mosquitoes and human malaria cases are strongly linkedto deforested habitat. 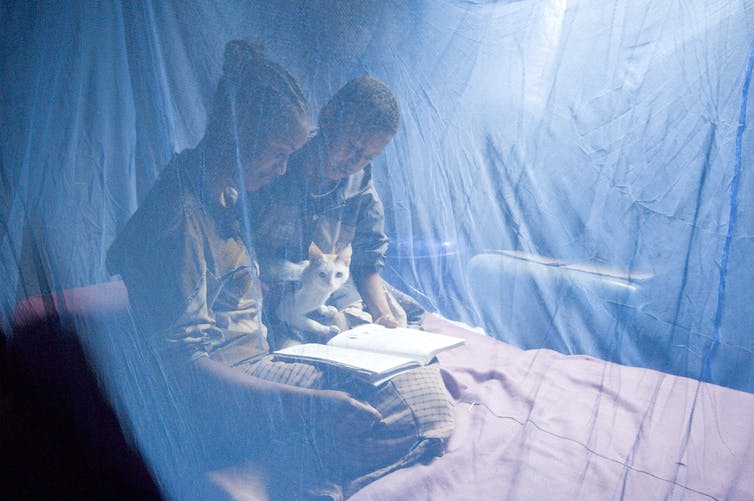 Children in Ethiopia read under mosquito netting, used to protect people from mosquitoes that transmit malaria.Louise Gubb/Corbis via Getty Images

Another type of malaria, Plasmodium knowlesi, known to circulate among monkeys, became a concern to human health over a decade ago in Southeast Asia. Several studies have shown that areas sustaining higher rates of forest loss also had higher rates of human infections, and that the mosquito vectors and monkey hosts spanned a wide range of habitats including disturbed forest.

Venezuelan equine encephalitis is another mosquito-borne virus that is estimated to cause tens to hundreds of thousands of humans to develop febrile illnesses every year. Severe infections can lead to encephalitis and even death.

In the Darien province of Panama, we found that two rodent species had particularly high rates of infection with Venezuelan equine encephalitis virus, leading us to suspect that these species may be the wildlife hosts.

One of the species, Tome’s spiny rat, has also been implicated in other studies. The other, the short-tailed cane mouse, is also involved in the transmission of zoonotic diseases such as hantavirus and possibly Madariaga virus, an emergent encephalitis virus.

While Tome’s spiny rat is widely found in tropical forests in the Americas, it readily occupies regrowth and forest fragments. The short-tailed cane mouse prefers habitat on the edge of forests and abutting cattle pastures.

As deforestation in this region progresses, these two rodents can occupy forest fragments, cattle pastures and the regrowth that arises when fields lie fallow. Mosquitoes also occupy these areas and can bring the virus to humans and livestock.

Ebola: Disease at the forest’s edge

Vector-borne diseases are not the only zoonoses sensitive to deforestation. Ebola was first described in 1976, but outbreaks have become more common. The 2014-2016 outbreak killed more than 11,000 people in West Africa and drew attention to diseases that can spread from wildlife to humans. 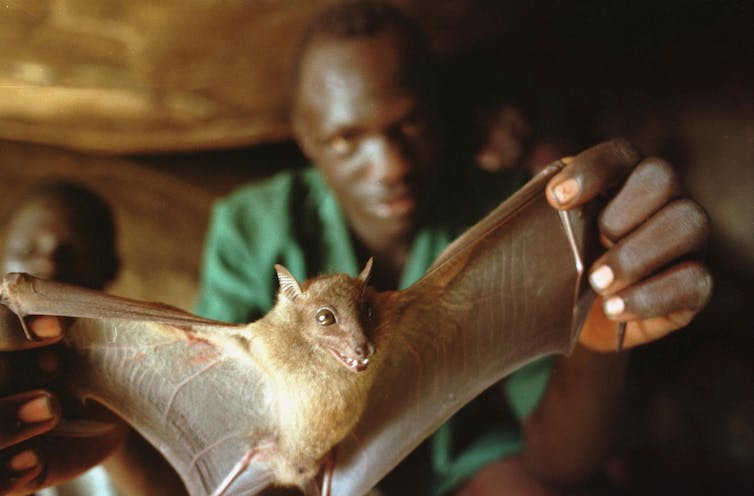 Bats, sometimes eaten as food, have been suspected of spreading Ebola.Tyler Hicks/Getty Images

While the exact nature of transmission is not yet known, several studies have shown that deforestation and forest fragmentation were associated with outbreaksbetween 2004 and 2014. In addition to possibly concentrating Ebola wildlife hosts, fragmentation may serve as a corridor for pathogen-carrying animals to spread the virus over large areas, and it may increase human contact with these animals along the forest edge.

What about the coronavirus?

While the origin of the SARS-CoV-2 outbreak hasn’t been proved, a genetically similar virus has been detected in intermediate horseshoe bats andSunda pangolins.

The range of the Sunda pangolin – which is critically endangered – overlaps with the intermediate horseshoe bat in the forests of Southeast Asia, where it lives in mature tree hollows. As forest habitat shrinks, could pangolins also experience increased density and susceptibility to pathogens?

In fact, in small urban forest fragments in Malaysia, the Sunda pangolin was detected even though overall mammal diversity was much lower than a comparison tract of contiguous forest. This shows that this animal is able to persist in fragmented forests where it could increase contact with humans or other animals that can harbor potentially zoonotic viruses, such as bats. The Sunda pangolin is poached for its meat, skin and scales and imported illegally from Malaysia and Vietnam into China. A wet market in Wuhan that sells such animals has been suspected as a source of the current pandemic.

There is still a lot that we don’t know about how viruses jump from wildlife to humans and what might drive that contact.

Forest fragments and their associated landscapes encompassing forest edge, agricultural fields and pastures have been a repeated theme in tropical zoonoses. While many species disappear as forests are cleared, others have been able to adapt. Those that adapt may become more concentrated, increasing the rate of infections.

Given the evidence, it is clear humans need to balance the production of food, forest commodities and other goods with the protection of tropical forests. Conservation of wildlife may keep their pathogens in check, preventing zoonotic spillover, and ultimately benefiting humans, too.

Amy Y. Vittor receives funding from the National Institutes of Health. She is affiliated with the group Florida Clinicians for Climate Action as a steering committee member.