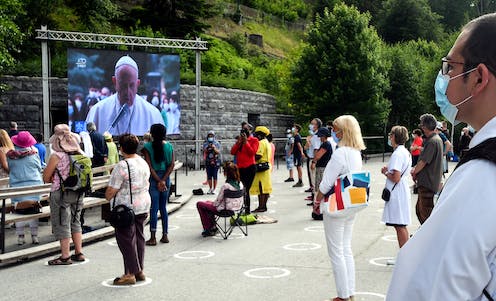 People wearing masks and social distancing at the Sanctuary of Our Lady of Lourdes on May 30, 2020.Laurent Dart/AFP via Getty Images

The Catholic Church held what is being termed as the first online pilgrimage to the Sanctuary of Our Lady of Lourdes in France. Earlier this spring, for the first time in its 162-year existence the shrine was closed as part of measures to stem the spread of the coronavirus.

This online pilgrimage included many elements of the actual journey such as traditional prayers and communion, but recreated for a virtual experience. Prayers and services were offered in both English and Spanish. Participants were shown scenes of the healing waters, taken on a virtual tour of the cave and heard music that is part of the normal, in-person experience.

As a scholar of the Bible, Judaism and Christianity, I know the importance of pilgrimages. But rituals have often been adapted in the face of difficult circumstances.

The pilgrimage of Lourdes

In 1858, 14-year old Bernadette Soubirous, the oldest of nine children born to a local miller and laundrywoman in southwestern France, claimed to have had a series of visitations of an apparition of a woman in a cave in Lourdes.

Four years later, in 1862, local Catholic authorities confirmed that the visions were of the Virgin Mary. The confirmation process was based on both interviews with Soubirous as well as through the investigation of events at the grotto that were deemed miraculous.

Ever since, the site has been a pivotal place for pilgrimage rites, particularly on July 16, commemorating the last visitation of Mary to Soubirous.

Some of these rites involve immersion in, or drinking from, waters in Lourdes, which are believed to hold healing powers. In 1879, a woman from the United States named Mary Hayes, who suffered from severe headaches, wrote a letter to Father Alexis Granger about the healing powers of the water.

Granger was originally from France but at that time was the pastor of the Church of Our Lady of the Sacred Heart at the University of Notre Dame. He had given Hayes some of the water from Lourdes to help with her ailments. Hayes reported that the healing waters of Lourdes had a restorative effect, stating that “I have more faith in” the waters “than in all the doctors of the world.”

As rumors of healing miracles at the pools of the grotto in Lourdes became more numerous in the 19th century, the pilgrimages every July to commemorate the appearance of Mary to Soubirous became much more important in Catholic religious practice. 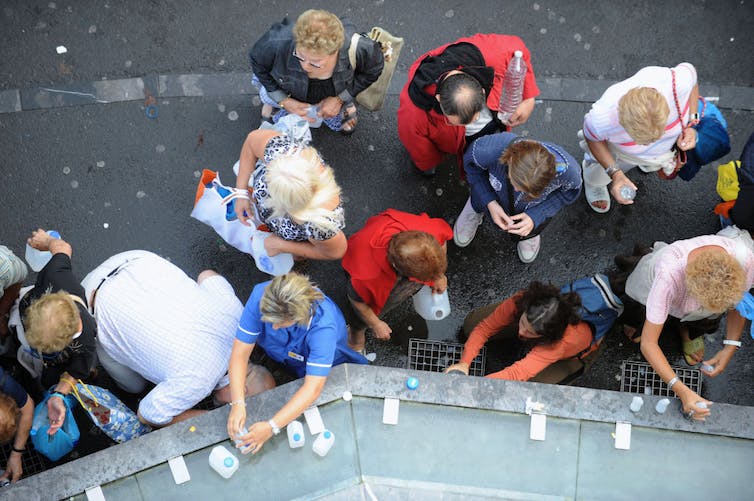 Pilgrims filling bottles with spring water flowing from taps installed near the grotto of the Sanctuaries of Lourdes in 2008.Eric Cabanis/ AFP via Getty Images

A place for God’s dwelling

During a pilgrimage, people visit a place, often where a significant religious event occurred. According to the Bible, locations where God appeared to humans could become special sites where regular pilgrimages could happen.

For example, the book of Deuteronomy, part of the Bible called the Torah and traditionally believed to have been written by Moses, commands ancient Israelites to come three times in a year to the place where God “causes his name to dwell,” thought to be Jerusalem.

The significance of this pilgrimage clearly played an important role in ancient Israelite religion. Archaeological excavations have revealed ancient routes attesting to journeys of pilgrims to Jerusalem. Parts of the book of the Psalms in the Bible may also have been ancient songs, called “psalms of ascent,” that pilgrims sung on their routes.

While most translations of the book of Deuteronomy indicate that pilgrims “appear before the Lord,” evidence exists that the original text suggests that pilgrims would actually see God.

Deuteronomy makes it clear that such visitations to the holy site will bring tangible benefits in agricultural produce.

Despite the mandate in the Bible for pilgrimage, such journeys had limited value in the earliest centuries of Christianity. For many Christians during this time, physical places like Jerusalem were more valuable as spiritual concepts than actual destinations for pilgrims.

Karen Armstrong, author of many books on religion and history, observes that Origen, a third century A.D. Christian scholar, visited Jerusalem and its environs in order to understand where certain events in the Bible occurred.

Such a visit, however, was not a pilgrimage, and, according to Armstrong, Origen “certainly did not expect to get a spiritual experience by visiting a mere geographical location, however august its associations.”

The importance of pilgrimage changed and occupied a more central place in Christianity beginning in the fourth century A.D. when the Roman emperor Constantine converted to Christianity.

His mother Helena visited Jerusalem and Israel, following the footsteps of the life, trial and death of Jesus.

It was a general belief in the ancient world that anywhere God or a divine emissary made themselves visible to humans could become a holy space. Materials from such divine visitation could become holy relics around which stories of miracles and shrines, objects of pilgrimage destinations, could be constructed.

Martin of Tours, a prominent figure in Christian monasticism in the sixth century A.D., saw a destitute man and, remembering Jesus’ words in the Gospel of Matthew that caring for the poor is like caring for God, Martin gave the poor man his cloak.

The destitute man revealed himself to be Jesus himself, and portions of that “little cloak,” or capella in Latin, were housed in small churches. The origins of the word “chapel” was derived from capella – spaces that, at least in some cases, would become destinations for pilgrimages.

While pilgrimage has a long history, such practice can adapt to changing circumstances.

The Bible, in the Old Testament book of Leviticus chapters 13 and 14, requires that individuals showing evidence of exposure to a highly infectious skin disease be separated from the larger community.

This passage provides the platform for the belief that quarantine is necessary during the outbreak of an infectious disease. As such, for many priests and pastors these chapters allow a biblical warrant for innovation. 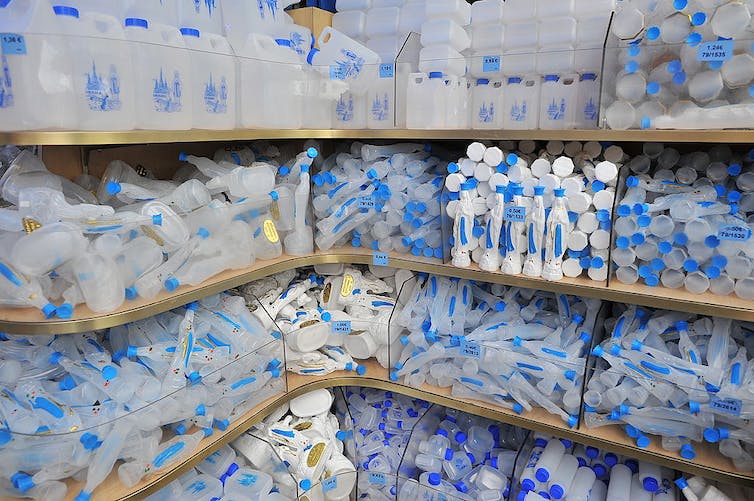 Indeed, for many years, the healing waters of Lourdes have been packaged and distributed worldwide for those who can’t go on the pilgrimage.

The pilgrimage undoubtedly remains an important journey for many Christians, even when taken online. It attests to transformations of the ritual in the face of difficult circumstances. In fact, social media estimated that participation was five times greater than normal viewership in a pilgrimage.

The coronavirus pandemic has caused unprecedented disruptions to many religious activities. But the adaptations to the pilgrimage to Lourdes in 2020 show that adaptation and innovation can play a key role in observing rituals.

Samuel L. Boyd does not work for, consult, own shares in or receive funding from any company or organization that would benefit from this article, and has disclosed no relevant affiliations beyond their academic appointment.