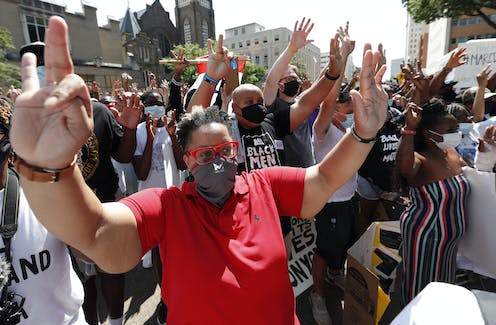 Companies are having trouble keeping up with the recent rise of activism.AP Photo/Rogelio V. Solis

Dozens of companies with no track record of activism have made statements in recent weeks in support of Black Lives Matter following what I believe is unprecedented pressure from racial justice protesters.

It may have come as a surprise to some – given just a couple months ago corporate America showed little interest in the Black Lives Matter movement – but to me and my colleagues at the USC Center for Public Relations, it made sense.

Earlier this year, we conducted a global survey on what we dubbed the “new activism.” At the time, we were aware that activism was a growing force in American society but couldn’t have predicted the topic would become so relevant so soon. Only a few months later, the brutal killing of George Floyd in late May sparked an eruption of activism on the streets of America, which has created a series of complex challenges and opportunities for the corporate world.

Our survey shows that companies, which have little experience working with activist groups and causes, have struggled with the rise in activism, not only among the public but among their employees as well. Our research also found that companies recognize the benefits when they engage.

Whom we spoke to

To get the perspective of companies and their communicators, we surveyed 837 public relations professionals – including both consultants and in-house employees – around the world from Jan. 21 to Feb. 24.

The views of public relations executives are important in understanding how companies think because they are the ones who counsel corporate CEOs on how to communicate effectively with customers, employees, activists and others.

Separately, we surveyed 296 activists from March 14 to March 15. The respondents self-identified as people who are proactively engaged in social causes and political issues.

While we don’t suggest our results are representative of the PR field or activists, we believe our data provides numerous insights about their attitudes and beliefs. Separate from the survey, we also identified several activist leaders and PR professionals for in-depth interviews and conducted follow-up conversations. In crafting the final report, I also relied on several other data sources and my three-and-a-half decades of experience in the world of PR.

Here are four key takeaways from our survey.

We believe one of the most profound shifts we’re seeing among activists is from protest to policy.

In the recent anti-racism protests, there’s been an ongoingdebate about whether activist energy needs to stay in the streets – such as in Portland, Oregon – or whether it should focus more on gearing up for the election in November.

We asked respondents to name the most effective way to create long-lasting change among 21 different tactics. Over 40% of activists chose voting in elections as the best way to create change, followed by 20% who selected running for office and 19% who picked mobilizing voters. Only 11% cited protesting in public or participating in strikes or walkouts as the most effective tactic.

On this strategy, they are in total agreement with communication professionals, who also picked mobilizing, voting and running for office as the best ways to effect change. This suggests activists and companies can find common ground and work together – if the corporate commitment is genuine.

2. CEOs are seen as change agents

And, in fact, we found that today’s activists believe CEOs have a greater ability to make change than politicians, journalists and religious leaders.

We asked respondents to rank which types of people will be most influential in initiating social change in the future. Both activists and PR professionals said corporate chiefs are the fourth-most influential group, behind community leaders, celebrities and average citizens – in varying orders.

While we found that activist groups welcome the credibility and resources corporations can bring, they’re skeptical of working with companies that are “just checking the box” on corporate social responsibility and lack a real commitment to change.

“Today’s activists aren’t interested in lip service from corporations, politicians or peers,” Brendan Duff, co-founder of March for Our Lives, told me in May. “They are rooted in achieving authentic social and political change.”

3. Challenges and benefits of working with activists

Most communicators, however, don’t place a high priority on speaking out about societal problems unless they’re addressing issues that directly affect their bottom line, like health care and diversity.

Despite the fact that 64% of the communication professionals we surveyed believe activism will grow in influence in the next five years, a mere 11% said they plan to engage with an activist group in the coming year.

Presumably, the recent protests and the pervasive conversations they’ve generated will raise this level of engagement. But “getting involved” can be risky for businesses who have never stepped into the minefield of activism, where any gesture, regardless of its intention, can be misunderstood.

Even a progressive brand like Starbucks was forced to revise a policy prohibiting associates from wearing Black Lives Matter slogans to work after pressure from activists.

In fact, 68% of the PR professionals we surveyed said they’re not fully prepared to deal with activist groups, primarily because they have no previous experience doing so and perceive them more as troublemakers than problem solvers.

Yet, we also found that most of the communicators who have actually engaged with activists described these relationships as beneficial to their companies.

“We make no apologies that doing the right thing for society is, in fact, the thing to do for business,” Damon Jones, Procter and Gamble’s chief communications officer, said in an interview.

Companies have also struggled dealing with activists on their payroll, as we’ve seen with walkouts by employees at tech companies like Google, Facebook and Amazon.

Only 29% of communicators report that their agencies or corporations have policies regarding employee activism. And over half admit they don’t know if their companies support employee involvement in activist activities or not. This lack of clarity raises complicated questions.

What if a passionate staffer posts something inflammatory on Instagram? What if a long-term employee is arrested during a protest? What if an office worker wears a T-shirt to work featuring a controversial slogan?

What employees say and do after work used to be their own business, but the internet has erased those boundaries. It takes three minutes of online research to discover someone’s work history and another three to publicly attack the company he or she works for.

Powered by purpose and armed with modern communication tools, the “new activists” we surveyed show they are committed to creating seismic societal shifts.

Our research found that they are full of passion, but the failures of past generations of activists to achieve their goals has taught them that it’s not enough. I think it’s safe to expect today’s activists to participate aggressively in the political process until they produce the long-lasting changes they seek.

And I believe the corporate world should welcome their participation, listen to their perspectives and look for opportunities to collaborate to help solve the problems they address. New activism requires new communication.