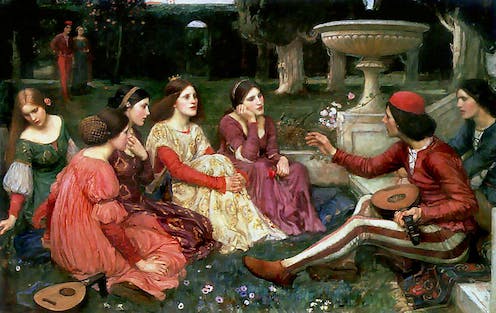 A scene from Giovanni Boccaccio's 'The Decameron' – sales of which have reportedly risen during the pandemic.John Waterhouse/Lady Lever Art Gallery

A recent Pew Research poll found that religious faith had deepened for a quarter of Americans because of the coronavirus pandemic.

Some might indeed take solace in religion at a time of uncertainty, such as a pandemic, but the literary texts that I teach in my university course, “Pandemics in Literature,” suggest that this is not always the case: Faith may deepen for some, while others may reject or abandon it altogether.

Christianity and the Black Death

In one of the most well known works of pandemic literature, Giovanni Boccaccio’s “The Decameron” – sales of which have reportedly risen during the coronavirus – faith and religion are mocked and satirized.

“The Decameron” is a set of one hundred stories told by seven young women and three young men quarantined from the Black Death on the outskirts of medieval Florence. Interestingly, “The Decameron” is the earliest and most significant text that shows a rejection of Christianity at a time when most of Europe was still under the powerful influence of the Catholic Church and its teachings.

In Boccaccio’s massive collection of novellas, monks and other dignitaries of the Church are ridiculed, disparaged and shown in their human fallibility. For example, in the fourth story on the first day, an abbot and a monk conspire to bring a willing young girl into a monastery – an act that is celebrated by the narrators as brave and laudable, even though this went against every religious and moral doctrine of the time.

This and other stories show that personal faith or the church and priests are never able to help humans in their vulnerability. Instead, it is earthly love or passion that become the driving forces of human behavior.

Both the structure and the representatives of the Catholic Church as well as the possibility for individual, personal faith are rejected in Boccaccio’s collection.

Religion in the time of cholera

On the face of it, Mann’s novella does not seem to engage with religion or faith. Yet, Aschenbach’s character is deeply rooted in the religious principles and values of a Protestant work ethic. For Mann, Aschenbach’s service to art and literature is like religion because of his dedication – he writes stoically every day, even when it’s difficult. 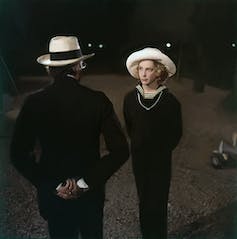 British actor Dirk Bogarde and Swedish actor Bjorn Andresen on the set of ‘Death in Venice.’Sunset Boulevard/Corbis via Getty Images

When Aschenbach decides to travel to cholera-stricken Venice, he is seduced by the Polish boy Tadzio, who not only unleashes Aschenbach’s sudden homoerotic desire but also leads him to feast on cholera-infested strawberries that eventually kill him.

Since Tadzio, the object of Aschenbach’s forbidden love, is always an object of adoration and never a subject, it is easy to regard him as a personification of art. Aschenbach’s admiration of Tadzio is almost religious: Tadzio is depicted as an “angel” when he is seen to follow “the Summoner,” the angel of death, embodied by Tadzio: “It seemed to him the pale and lovely Summoner out there smiled at him and beckoned; (…) And, as so often before, he rose to follow.”

In the face of cholera, religion, in “Death in Venice,” gets replaced with art as a spiritual experience; earthly love becomes a substitute for personal faith. 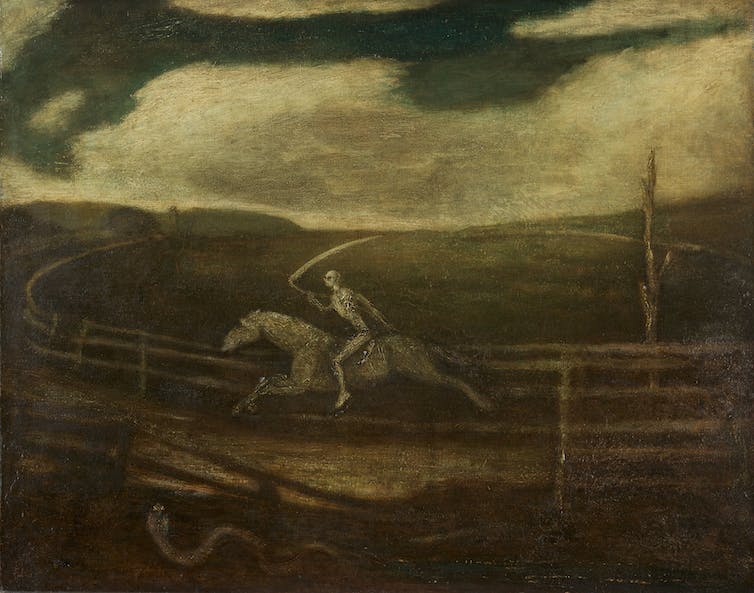 Illustration of ‘Death on a Pale Horse.’Albert Pinkham Ryder/The Cleveland Museum of Art

The story borrows its title from Revelation 6:1-8, with the four horsemen of the Apocalypse as the Conqueror on a white horse, War on a red horse, Famine on a black horse and Death on a pale horse.

There are almost no literary works dealing with the 1918 influenza pandemic, except for Porter’s short story. A narrator tells the story of Miranda, a newspaper woman, and Adam, a soldier, and the suffering that both endure because of their influenza illnesses. Adam eventually succumbs, but Miranda only learns of his death later.

Before Adam’s death, Miranda and Adam recall prayers and songs from their childhood faith. They both say that now “[i]t doesn’t sound right, somehow,” meaning their childhood songs and prayers are no longer valuable, and their attempt to take comfort in the bluegrass song “Pale Horse Pale Rider” in the face of Adam’s impending death fails, too.

There is little scholarship on Porter’s interesting story, but English professor Jane Fisheraptly notes how Porter invokes new literary techniques and lessons learned from the Black Death in “Pale Horse, Pale Rider.” While personal faith is in this story under consideration as a source of solace and relief, it is ultimately rejected.

Other literary works that engage with pandemics show a similar course, both in highbrow and more popular genres. Albert Camus’ “The Plague” of 1947 was celebrated as an existentialist classic, where faith and religion have no place and individual effort is impossible.

In Stephen King’s 1978 tome “The Stand,” all characters surviving the apocalyptic and fictitious “super-influenza” appear apathetic, beyond religion. And Fermina Daza, the lover of the main protagonist in Gabriel García Márquez’s “Love in the Time of Cholera” grows to despise her religion.

We do not yet fully know how the coronavirus will affect societies in either deepening ties to faith or disillusionment from religious institutions. But it will be interesting to see what today’s authors will write about how humanity survived the pandemic of 2020.

Agnes Mueller does not work for, consult, own shares in or receive funding from any company or organisation that would benefit from this article, and has disclosed no relevant affiliations beyond their academic appointment.