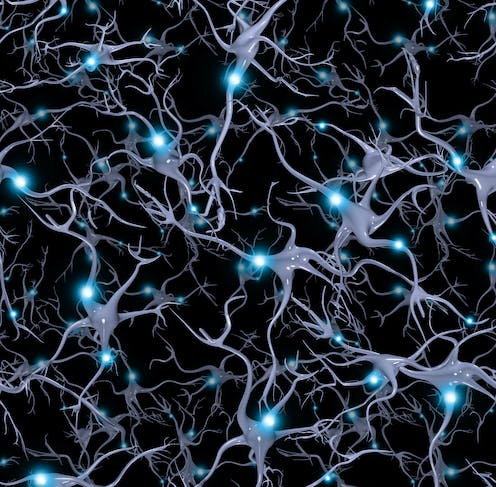 The microbes in the mother's gut can alter the number of neurons in the baby's brain and the connections they make.bestdesigns/Getty Images

When a fetus is developing in the mother’s womb, it is essential that the fetus receives the correct nutrients and protection during this critical developmental window. One element of this environment includes the maternal microbiota, which are the collection of bacteria and other microorganisms that inhabit the mother’s body.

How the maternal microbiota directs fetal development, or modifies risk factors that could harm the fetus’s development, are major areas of research.

My training in neurobiology and microbiome biology led me to wonder how different microbiomes – from the mother during pregnancy or the infant’s early-life gut microbes – can shape brain development and behavior later in life, which is an active area of research.

My recent research paper describes a fundamental role of the maternal gut microbes in development of the fetal brain. Specifically, my study identified how a mouse mother’s microbiome influences the formation of axons – long nerve fibers that project from a neuron – in her offspring, affecting its ability to sense its environment.

What is the maternal microbiota?

The maternal microbiota in pregnancy and during early life of the newborn includes microbes that inhabit the intestine, vagina, skin and breast milk and have important physiological consequences for the health of the mother and offspring.

There is a mounting evidence supporting the important role the maternal microbiome plays in fetal growth and development. For example, in a study of pregnant women, the gut microbiome was shown to change between the first and third trimester of pregnancy. These changes are associated with the need to transfer energy and nutrients to the fetus.

The vaginal microbiome of healthy pregnant women inhibits the growth of bad bacteria by secreting antibacterial molecules and producing lactic acid, which protects the offspring from pathogenic microbes during pregnancy and birth.

The maternal vaginal, fecal or skin microbes are transmitted from the mother to the offspring during and after birth. The types of microbes that the offspring inherits depend on whether the baby was born through cesarean section or vaginal delivery.

But this collection of microbes isn’t static. As the offspring develops, the microbiota continues to evolve depending on whether the infant is breast-fed or given formula, as well as other environmental factors. Thus the maternal microbiota is important for the health of the fetus and the microbes the offspring will carry after birth.

Interactions between the microbiota and nervous system 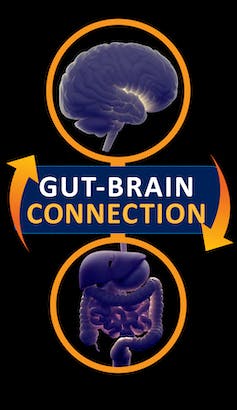 Microbes in the mother’s gut alter the brain development of the fetus.ChrisChrisW/Getty Images

Research over the past two decades shows the microbiota is important for development and function of the nervous system.

In animal studies, adult mice that were raised in a sterile, germ-free environment, or depleted of the microbiota through treatment with antibiotics, had reduced levels of a protein that is important for the formation of new neurons.

Other brain changes in these microbe-free animals included changes to the parts of the neuron, essential for communication. There were also shifts in the levels of chemicals – serotonin, dopamine, noradrenaline and nerve growth factor-inducible protein A – that allow nerve cells to talk to each other.

Studies done in a number of different species, like zebra fish, fruit flies and pigs, show that the microbes that an organism carries affects social, communication, stress-related and learning and memory behaviors.

This inspired me and many others to investigate how microbes in the mother’s gut influence brain development and behavior of the offspring later in life.

The structure of a functioning brain begins while the fetus is developing in the womb. That includes the formation of new nerve cells, migration of nerve cells to their correct location, formation of axons and communication between nerve cells. Environmental risk factors encountered during pregnancy can drastically impact brain development and manifest as neurodevelopmental disorders.

In my recent study in mice, we focused on how the natural, unaltered mother’s gut microbes influence brain development and behavior. We compared the offspring from mothers with a full set of gut microbes to those from mothers lacking them.

My colleagues and I in the lab of Elaine Hsiao found that there were fewer and shorter axons projecting from a region of the brain called the thalamus to the cortex – the outer layer of the brain – in the offspring from mothers lacking gut microbes during pregnancy. These axons are important for relaying sensory information from the environment.

This suggests that the normal maternal gut microbiota is necessary for axon formation in the embryonic brain and sensory behaviors in the adult offspring.

What roles do microbes play in your body?

While digesting food, gut microbes can produce thousands of small molecules called metabolites that influence an animal’s physiology. These metabolites play countless roles in maintaining health and triggering disease throughout the body. As such, we hypothesized that the microbes in the mother’s gut produce these essential metabolites that are delivered to the developing fetus along with other nutrients.

Together, these findings demonstrate how distinct maternal gut microbiota can affect fetal brain development through the delivery of essential molecules. This study also provide insights into which molecules are important for healthy brain development.