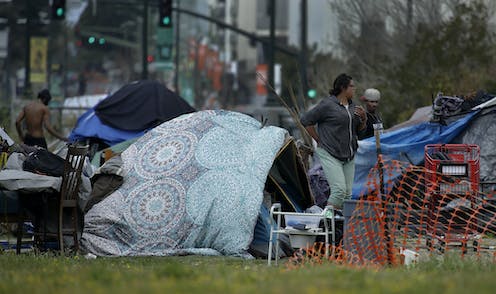 American citizens, even homeless ones, still have the right to vote.AP Photo/Ben Margot

In a year in which every vote – and every voter – is under scrutiny, many homeless people will have a very hard time casting their ballots.

This situation is, in part, a legacy of the country’s original requirement that to be eligible to vote, a person had to be a white male landowner. That rule has changed over the years to include women, people of color, renters and people with mortgages. But the idea remains that a person must have a residence, a sustained presence in a particular community to be allowed to vote.

That concept was reinforced by the 2002 Help America Vote Act. Under that legislation, many states now ask would-be voters for a mailing address; proof of rent, homeownership or utility service at an address; or evidence of having lived in the community for a period of time. People who are homeless have trouble meeting these demands.

As a scholar of public policy, I believe American citizens should be able to vote in the communities they are part of.

Who are homeless voters?

My students and I found that there are few statistics about homeless voters. Statistics that do exist are kept by groups who advocate for the rights of homeless people. The best available data show how few homeless people vote: In 2008, about 60% of the U.S. homeless population was a U.S. citizen 18 or over and therefore generally eligible to vote, but only one in three was registered.

In 2012, only about 10% of homeless people actually voted. By comparison, 54% of the country’s voting-age population voted that year, roughly the same share as cast ballots in the most recent presidential election, in 2016.

Homeless people are also more likely to be nonwhite – with people of Native American and Pacific Islander descent making up a far larger share of the homeless population than they do of the U.S. as a whole.

By the end of 2020, there may be many more homeless Americans than there were at the end of 2019: One estimate indicates massive unemployment as a result of the pandemic could boost homelessness by 40% to 45%. 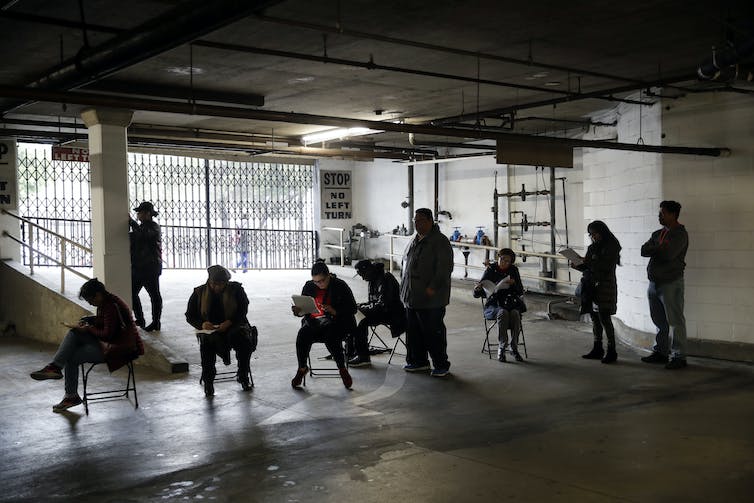 With so many homeless voters having mental illness diagnoses, they are more susceptible to the laws in 39 states and the District of Columbia that let judges take away a person’s right to vote on the basis that a mental illness makes them incompetent.

People who have been in prison or jail, as 6% of homeless people have, can have difficulty voting too. Maine and Vermont are the only places where even serving inmates can vote.

In 16 states, release from incarceration is enough to reinstate the right to vote. In 21 others, former inmates’ voting rights are restricted until their sentences are complete, including any probation or parole. And in 11 states, convicted felons face further restrictions, including post-sentence waiting periods, requirements to pay all fines and fees, or even that they must seek a governor’s pardon before being allowed to vote again. 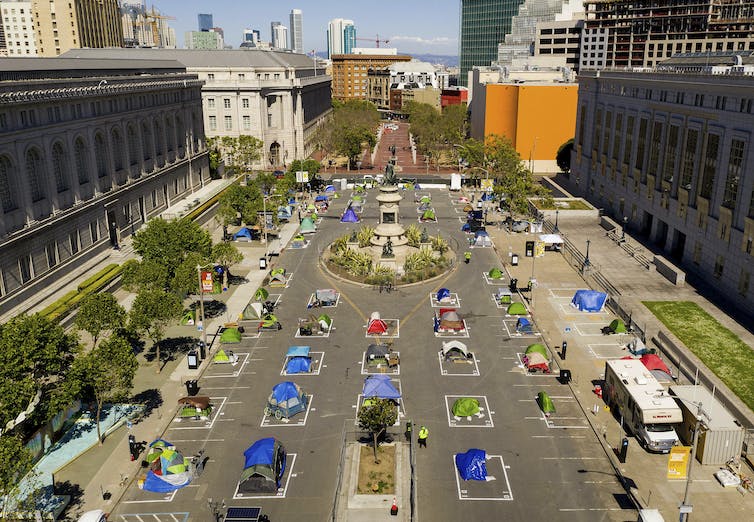 As cities responded to the pandemic, they moved homeless people to different locations – sometimes with less public transit and less access to voting locations.AP Photo/Noah Berger

Homeless people have additional challenges to voting beyond the problems that come with being from a poor background, being a racial minority or suffering from health problems.

Even registering to vote usually requires proof of residence. Some states require that a person prove they have lived in the state, or the municipality, for a period of time before the election. These requirements are difficult – if not impossible – for homeless people to fulfill.

Many states also require some sort of identification to prove the prospective voter’s age and U.S. citizenship. After 9/11, laws in 26 states were changed to require a permanent address to obtain a government identification card, a luxury that homeless people, by definition, do not have.

Some local authorities even go so far as to ship homeless people elsewhere, effectively preventing them from voting where they may already be registered or requiring them to begin the process again. In San Francisco and Seattle, for instance, city officials have tried to reduce their cities’ homeless population by busing homeless people to other towns.

As part of efforts to limit the spread of the coronavirus, San Francisco has moved homeless people from one place to another within city limits as well – at times putting them far from locations where they could register to vote.

In the past, homeless people often had trouble getting to polling places because they are typically reliant on public transit, which may not serve voting locations. This year, the coronavirus is discouraging people from being willing to staff polling places, so there may be even fewer places to actually vote. During its June primary, for instance, the city of Louisville, Kentucky, had just one polling place – to serve more than 600,000 registered voters. 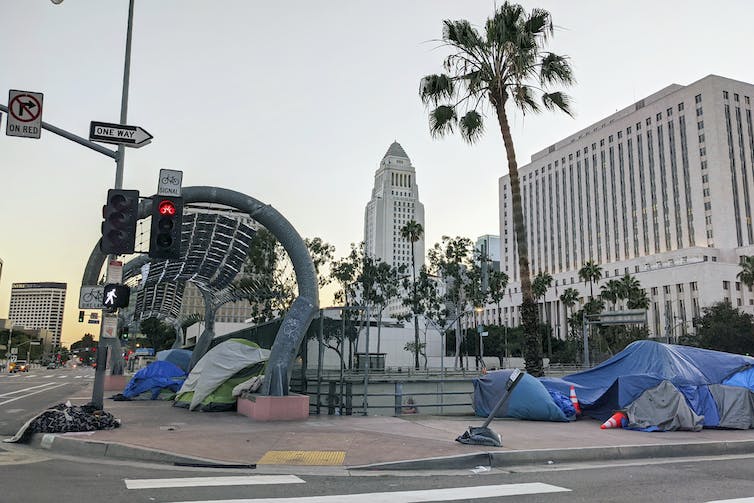 Some homeless people live within sight of Los Angeles City Hall but may have trouble casting ballots.AP Photo/Damian Dovarganes

There are some protections

Many voting-rights safeguards were weakened in 2013 when the Supreme Court struck down key elements of the Voting Rights Act of 1965.

But some protections remain for homeless voters. In 1984, for instance, a federal court in New York held that states cannot deny a person the right to vote just because they are homeless.

Since then, Congress has enacted several laws that help homeless people vote – though mainly as side effects of laws with wider intents. For instance, the 1990 Americans with Disabilities Act ensures voting rights and assistance for people with mental and physical diagnoses that may make it hard for them to cast ballots.

But the low voter registration and voting rates of homeless people signal to me that it’s not enough. States and local governments could step forward and find ways to make it easier for their homeless residents to vote, which would help fulfill the nation’s pledge that all citizens can have a say in how they are governed.

Dora Kingsley Vertenten does not work for, consult, own shares in or receive funding from any company or organisation that would benefit from this article, and has disclosed no relevant affiliations beyond their academic appointment.