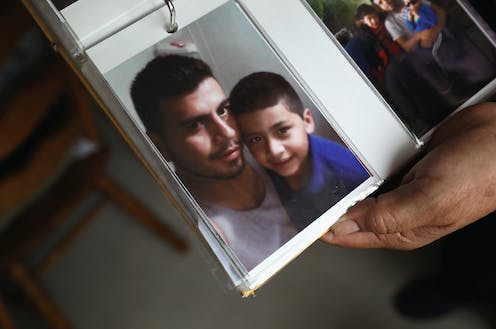 An undocumented immigrant who has lived in the U.S. for 28 years shows a picture of her grandchild and son, who was deported under Trump's 'zero tolerance' policy in 2017.John Moore/Getty Images

Donald Trump was on the defensive about his immigration policies in the final presidential debate, with a question about 545 migrant children taken by the U.S. government who may never be reunited with their parents. Immigration authorities say they cannot find the children’s families, many of whom have been deported to Central America.

Taking children away from their families at the border was part of a broader strategy aimed at discouraging immigrants from coming. The cruelty of the family-separation policytraumatized migrant children and spurred nationwide protests. A federal judge ordered the government to reunite the separated families on June 26, 2018.

Four years ago, candidate Trump was on the offensive about enforcement, portraying immigration as a threat to American security. Trump laid out his platform in an Aug. 31, 2016, campaign speech.

This overview examines President Trump’s record on three big promises made in that speech.

“[I]mmigration will be suspended [from] places like Syria and Libya.”

The rule, a revised version of the “Muslim ban” previously struck down as discriminatory, was upheld by the Supreme Court in 2018. Though the specific countries included in the ban have changed since then, the ban has dramatically limited immigration from several Muslim-majority countries. 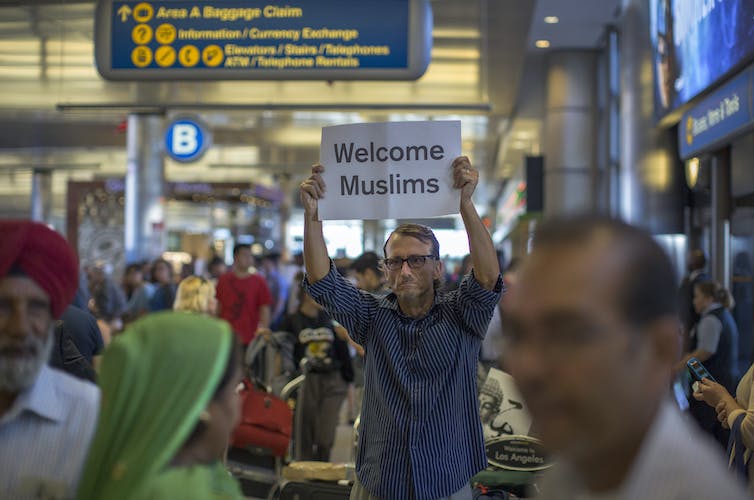 The Trump administration reduced refugee admissions allowed into the U.S. by capping the number who may be resettled in the country at 15,000 in 2020, down from 85,000 in 2016. This also disproportionately affected those from Muslim-majority regions.

“All immigration laws will be enforced.”

This promise was, perhaps, doomed from the start.

The federal government lacks capacity and popular support to fully enforce U.S. immigration laws, which one federal court called “a maze of hyper-technical statutes and regulations.” Doing so would also require surveillance and militarization that most Americans would find unacceptable.

Under Trump, a system prioritizing the removal of people found guilty of a crime was replaced with instructions to deport “all removable aliens,” including those who had been allowed to stay in the U.S. by discretion of an immigration judge.

To this end, the administration pledged to hire an additional 10,000 enforcement agents. Hiring has fallen short – both Border Patrol and U.S. Immigration and Customs Enforcement have fewer agents now than they did in 2016.

Two numbers that have grown under Trump are the number of child migrants held in state custody and the daily total of immigrants imprisoned in prisonlike detention centers. The U.S. detains more migrants than any other country, a trend that has been growing since the Clinton administration. The daily average hit a historic peak of over 50,000 in October 2019. That population has since declined during the pandemic.

“We will build a great wall … and Mexico will pay.”

Despite an executive order signed just days into his term calling for securitizing the border, Trump has fortified less new mileage along the U.S.-Mexico border than his two predecessors.

George W. Bush added about 450 miles along all four southern border states – California, Arizona, New Mexico and Texas – under a bipartisan 2006 congressional agreement called the Secure Fence Act. Around 100 more miles of the border were fenced under Barack Obama.

As of August 2020 Trump had covered just 5 previously unfenced miles along the U.S.-Mexico border. Double barriers or replacement fencing have also been constructed on several hundred miles since 2016.

The government does not fully disclose the length or location of border walls on its website, making these figures difficult to pin down. But Trump’s 5 new miles bring the total length of fenced U.S.-Mexico border to around 660 miles.

The Mexican government has refused to bankroll any of this project. So has Congress, which in 2018 rejected Trump’s request of US$18 billion to build 864 miles of border wall.

Trump’s subsequent diversion of funds from the defense budget for a border wall by declaring a “state of emergency” was ruled improper by a federal appeals court earlier this month.

Largely stymied by the courts and Congress in implementing some of his promised anti-immigration policies, Trump and his administration advanced a strategy of harsh law enforcement and regulatory changes to crack down on immigrants.

ICE regularly conducts dramatic SWAT-style raids in migrant-heavy workplaces like poultry plants and occasionally detains people near “sensitive locations” like churches, something ICE’s own guidelines recommend against. When immigrants go for a routine ICE check-in, they may be apprehended and deported.

“Zero tolerance” rules expose even legal permanent residents to removal by making a long list of actions into deportable offenses, including using welfare services, admitting to addiction problems or failing to inform the government quickly of a change of address.

By the numbers, President Barack Obama still removed more people each year, partly because unauthorized border crossing by Mexican nationals across the southern border was higher during the Obama years.

But Trump’s immigration enforcement is more random and punitive, vastly increasing criminal prosecutions for immigration-related offenses and removing people who have been in the U.S. longer. Trump has also tried repeatedly to end the Obama-era Deferred Action for Childhood Arrivals program, or DACA. 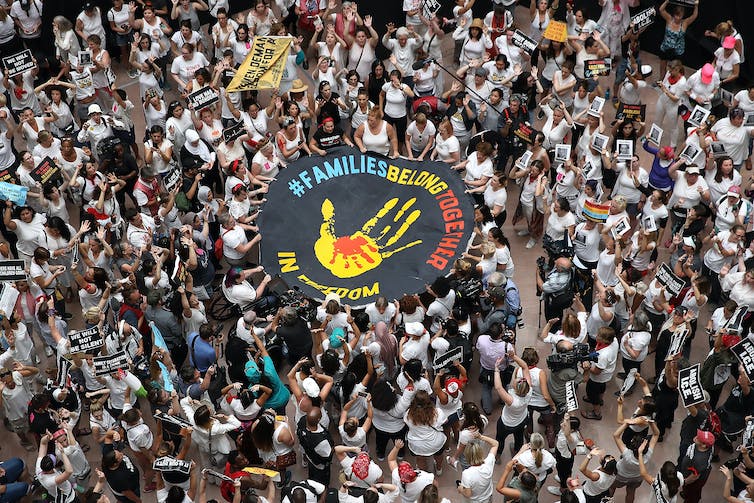 Women demand an end to the family-separation policy on June 28, 2018, inside the Hart Senate Office Building in Washington, D.C.Win McNamee/Getty Images

The Trump administration has also dramatically restricted the federal system allowing migrants to apply for asylum under international and domestic law and has treated asylum seekers as if they were criminals. The administration finally shut it down entirely during the COVID-19 pandemic.

Many such actions have been challenged as unconstitutional, among them family separation and sending asylum seekers to Mexico to wait while their claims are processed, and the cases will be heard by the Supreme Court next year.

All told, Trump has made over 400 changes to immigration policy, largely fulfilling his 2016 promises and creating a climate of fear even among immigrants who are legal residents and citizens.

However, because these changes happened almost entirely through executive ordersr – not legislative action – they can be undone by a future president, even without congressional support. But the human cost to migrant parents and children cannot so easily be reversed.

Miranda Cady Hallett does not work for, consult, own shares in or receive funding from any company or organization that would benefit from this article, and has disclosed no relevant affiliations beyond their academic appointment.