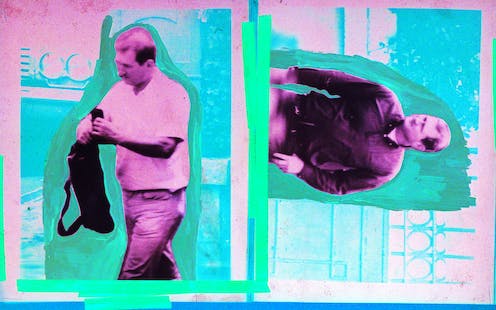 This man visited the Soviet embassy in Mexico City while Lee Harvey Oswald was in Mexico in 1963. U.S. officials think it may be Oswald.Corbis via Getty Images

Most conspiracy theories surrounding President John F. Kennedy’s assassination have been disproven. Kennedy was not killed by a gas-powered device triggered by aliens or by actor Woody Harrelson’s dad.

But speculation about Kennedy’s Nov. 22, 1963 murder in Dallas continues, fueled by unreleased classified documents, bizarre ballistics and the claim of assassin Lee Harvey Oswald – who was later killed on live TV while in police custody – that he was “just a patsy.”

Several JFK assassination experts, like the former New York Times investigative reporter Phillip Shenon, see Mexico as the best place to find answers regarding a possible conspiracy and who was behind it. 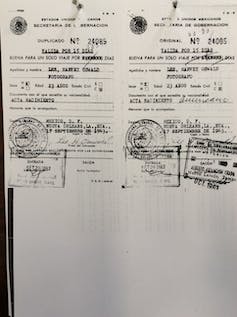 Oswald’s Mexico visa from 1963, with entry and exit stamps.Mexican Secretary of the Interior

Just over a month before Kennedy’s killing, Oswald took a bus from Texas to Mexico City. He arrived Friday morning, Sept. 27, 1963 and left very early on Wednesday, Oct. 2, according to American and Mexican intelligence.

Was Oswald a kind of rogue James Bond who went south of the border to consort with communists, Cuban revolutionaries and spies – or just a deranged killer?

I dug into that question while researching my book on conspiracy narratives in Mexico, and I think I found something everybody else missed: a hole in the story of the very man who started a tenacious conspiracy theory about Oswald’s Mexico trip.

Mexico was a Cold War hot spot in the mid-20th century, a haven for Soviet exiles, American leftists fleeing the anti-communist persecution of McCarthyism and sympathizers with Cuba’s Castro regime. Every communist and democratic country had an embassy in Mexico City – the only place in the Western Hemisphere where these enemies coexisted more or less openly. 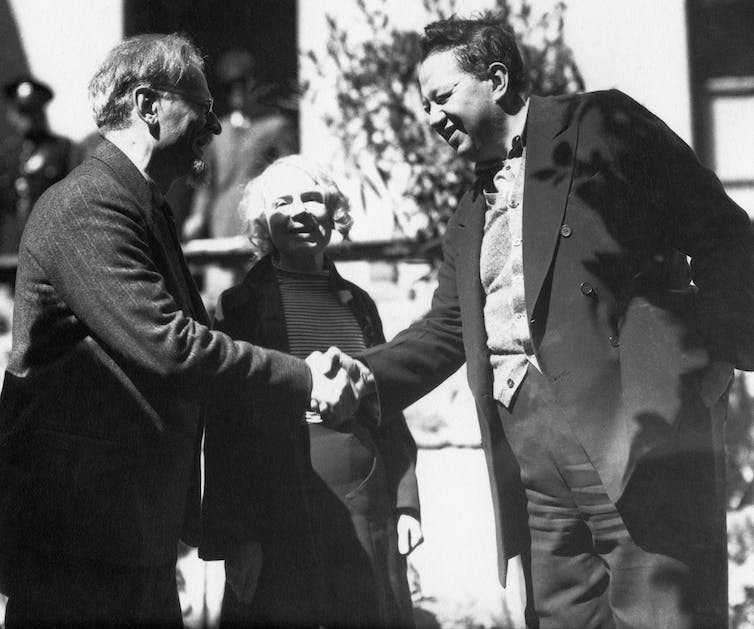 According to witnesses from the Cuban and Soviet diplomatic missions, Oswald visited their embassies repeatedly on Friday and Saturday. He was desperately seeking visas to those countries, which Americans were then prohibited from visiting.

Told such documents would take months to process, Oswald got in a heated argument with the Cuban consul, Emilio Azcué. Oswald also forced a KGB volleyball match on Saturday morning to be canceled when he brandished a weapon at the Soviet consulate, before bursting into tears and leaving.

Those events are well documented by the CIA, which in the 1960s had ramped up its Mexico operations to monitor communist activity, even hiring 200 Mexican agents to help. The Mexican Secret Service, whose 1960s-era files Mexico has recently begun to declassify, also tracked Oswald on Sept. 27 and Sept. 28, 1963.

Oswald’s whereabouts for the next three-and-a-half days, however, remain unknown. 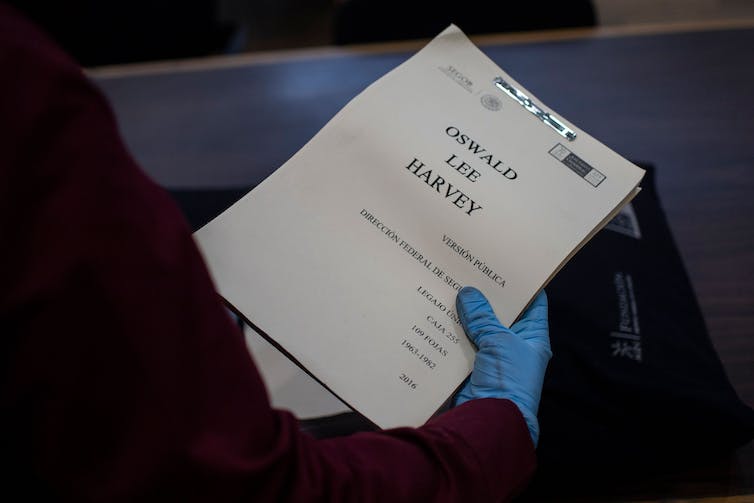 A conspiracy theory is born

A main conspiracy about Oswald’s undocumented time in Mexico City puts him in contact with dangerous Mexicans on the left side of the Cold War.

This story originated in March 1967, when the American consul in the Mexican coastal city of Tampico, Benjamin Ruyle, was buying drinks for local journalists.

One of them – Óscar Contreras Lartigue, a 28-year-old reporter for El Sol de Tampico – told Ruyle he’d met Oswald in 1963 when he was a law student at Mexico’s National Autonomous University.

Contreras said he’d been in a pro-Castro campus group and that Oswald had begged this group for help getting a Cuban visa. According to Contreras, Oswald spent two days with these National Autonomous University students, then met up with them again a few days later at the Cuban Embassy.

Evidently afraid for his life, Contreras wouldn’t tell Ruyle much more. He said he himself had traveled to Cuba, knew people in the Castro regime and had blown up the statue of a former Mexican president on campus in Mexico City. Contreras feared persecution for his political activities.

Contreras did say this wasn’t the first time he was sharing his story, though. After JFK was shot, Contreras told Ruyle, he’d commented to his editor that he’d recently met Oswald.

His story was, according to a memo later sent from CIA headquarters, “the first solid investigative lead we have on Oswald’s activities in Mexico.” U.S. government officials needed to find out if Contreras was a trustworthy source. 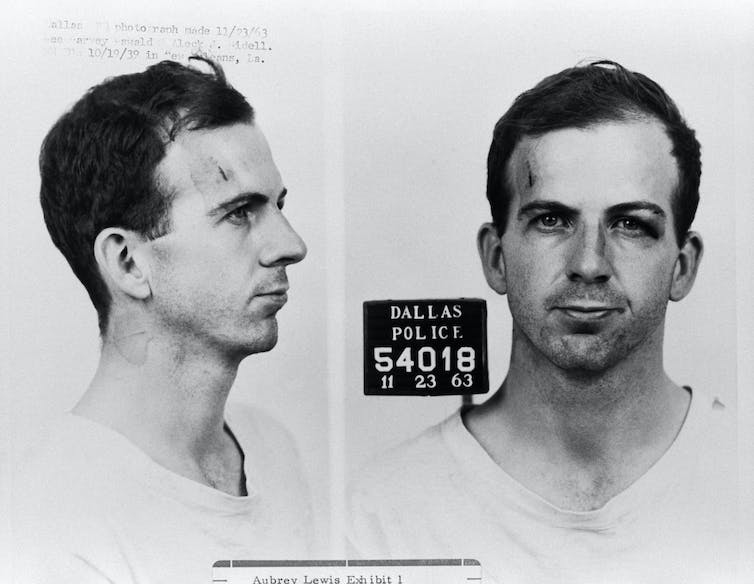 Three months after Ruyle’s happy hour, a CIA official from Mexico City went to Tampico to question Contreras. During the six-hour interrogation, Contreras still refused to go into details, but he did say Oswald never mentioned assassination – only that he said repeatedly he “had to get to Cuba.”

In 1978, a researcher from the U.S. House Select Commission on Assassinations named Dan Hardway went to Mexico to investigate the JFK assassination. He was unable to interview Contreras despite several attempts, but in an influential report warned his account should not be dismissed.

The New York Times reporter Shenon, who interviewed Oscar Contreras for a 2013 book on the JFK assassination, also found Contreras credible. Shenon wrote that Contreras – whom he calls a “prominent journalist” – “went much further” in their interview than he had with the CIA, alleging “far more extensive contacts between Oswald and Cuban agents in Mexico.”

Dan Hardway, who is now a lawyer in West Virginia, still believes Contreras. After reading Shenon’s book, he reiterated in 2015 that Lee Harvey Oswald might have been part of a wider Cuban intelligence web.

Hole in the web

Óscar Contreras died in 2016, so I could not interview him myself.

But in my investigation, a minute detail of his biography grabbed my attention – an apparently overlooked contradiction that could undermine his entire story.

In Contreras’ telling, he fled the National Autonomous University campus and moved to Tampico around 1964. Yet Contreras also allegedly told his “editor” about his encounter with Oswald after the 1963 Kennedy assassination.

College newspapers aren’t common in Mexico, and Contreras was a law student. So how could he have had an editor in 1963?

I thought his hometown paper, El Sol de Tampico, might hold the answer. Digging through its archives, I found that the newspaper ran a Sunday gossip column in the early 1960s called “Crisol,” or “melting pot.”

Óscar Contreras became the reporter for “Crisol” on June 6, 1963, and continued writing the gossip column in September and October that year.

While Lee Harvey Oswald was in Mexico City, Contreras was 300 miles away in Tampico. In flamboyant prose, faded back issues of the local paper show, he chronicled the sumptuous wedding receptions, quinceañeras and yacht excursions of Tampico’s high society. 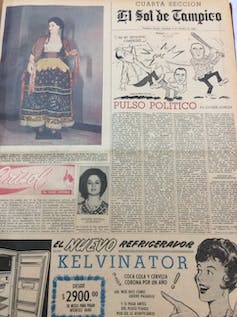 A political correspondent may live far from where his newspaper is published. But for a gossip columnist, that would be dereliction of duty.

This revelation plunges Oswald’s fall 1963 trip to Mexico back into the dark.

There are other conspiracy theories, including that Oswald had a Mexican mistress who took him to a party of communists and spies.

Conspiracy theories offer assurances of depth and closure, a promise that the biggest enigma of the 20th century is solvable. But from what we know about what Oswald did and didn’t do in Mexico City, he was a volatile, disorganized loner who couldn’t even handle travel logistics.

JFK’s assassination is a cold case. And in Mexico, only exhausted leads remain.

Gonzalo Soltero received funding from a Newton Advanced Fellowship by the British Academy.