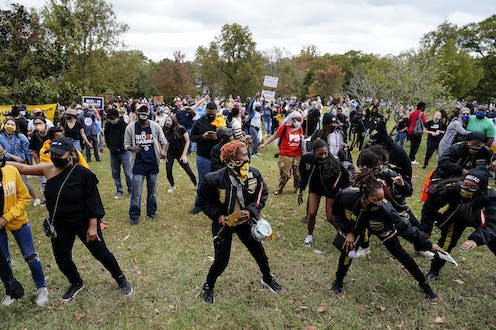 In Atlanta, people gather to dance and celebrate the election of Joe Biden as the next president.AP Photo/Brynn Anderson

For nearly 30 years, the state of Georgia has voted reliably Republican in presidential elections. Not since 1992 has the state backed a Democrat for president. Now, the hand recount of 2020 election ballots has confirmed Joe Biden won the state.

The initial returns from Georgia on election night leaned Republican, but in the days that followed, the balance of the count shifted steadily, as ballots from in and around Atlanta were counted. These votes were largely from communities of color, mostly African American – and they represent much of the state’s rich history of civil rights advocacy.

Atlanta, often called the “cradle of the civil rights movement,” was the birthplace of Martin Luther King Jr. and made up much of the congressional district represented by the late John Lewis.

I am a political scientist and race scholar, with specific emphasis on examining social justice movement strategy and the impact of collective action. To me, the story behind how those Biden-Harris voters were mobilized – with others across the state – is the latest chapter in the state’s history of community organizing for peaceful democratic political change. 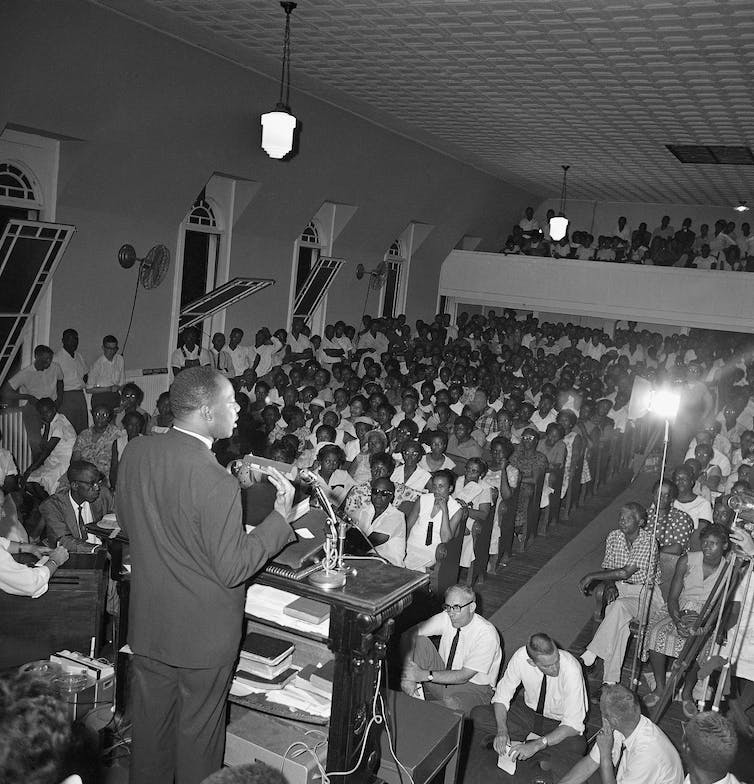 Social justice movements and civil rights activism have always been important in Georgia. Even during Reconstruction, in the wake of the Civil War, the organizers worked to teach Georgians about voting rights and the rules for qualifying to vote in a state that had long denied them that right.

Efforts continued through the years, including rule changes that added more than 100,000 Black voters to the state’s rolls between 1940 and 1947. In the 1950s and 1960s, voting rights campaigns across the South sought to remove the vestiges of a Jim Crow system that suppressed Black voters with literacy tests, grandfather clauses and physical intimidation.

One major effort was the 1961-1962 Albany Movement, based in the Georgia town of that name. The effort was led initially by the Student Nonviolent Coordinating Committee, with later help from the Southern Christian Leadership Conference, two of the nation’s leading civil rights organizations at the time. At the outset, Albany’s population was 40% Black, but many of them were not registered to vote.

The Albany Movement was the first attempt to completely desegregate a community, including through teaching nonviolence for people to engage in civil disobedience. The tactics and strategies pioneered there were successful in Albany and, as King and his movement shifted to Birmingham, Alabama, formed the basis for their work as well.

Between 1960 and 1964, half a million Black voters were registered in Georgia, as part of a larger Student Nonviolent Coordinating Committee voter registration drive across the South.

Those decades of activism built strong networks for grassroots organizing and taught many people how to effectively fight segregation and racism with boycotts, sit-ins and other nonviolent methods of direct action resistance. After King’s assassination in 1968, the movement slowed significantly, showing how important it was to decentralize future civil rights efforts, rather than focusing them on one specific person or place.

Decades later, the Movement for Black Lives arose in response to police brutality against Black Americans, and built on the lessons learned through the 1960s. 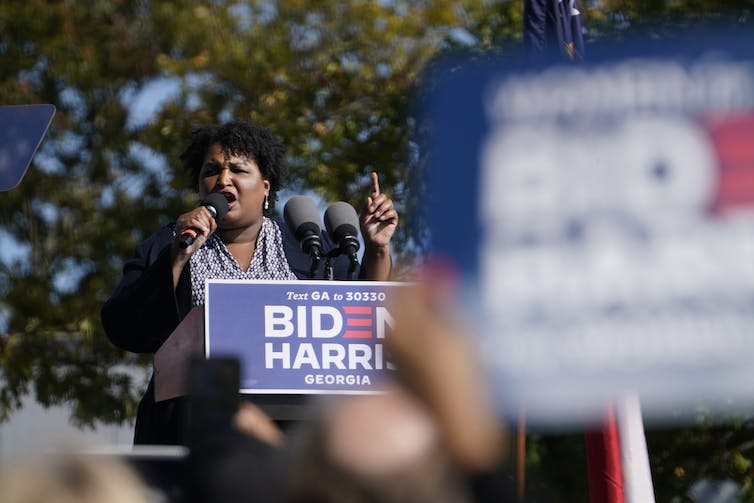 Georgia politician and activist Stacey Abrams speaks to a crowd in advance of the 2020 election.AP Photo/Brynn Anderson

The latest push for Black voters in Georgia came in 2018, after former State Representative Stacey Abrams, a Black Democratic woman, narrowly lost the race for governor to Brian Kemp, a white Republican man.

Her loss was largely attributed to the efforts of Kemp, who had been the state’s top elections official, to suppress Black votes. Those efforts included throwing more than half a million voters off the rolls – most of them Black – and tightening other voting rules.

In the wake of that election, Abrams committed herself to fight voter suppression in Georgia. She created an organization called Fair Fight to get the purged voters back on the rolls and to register others who were eligible to vote as well.

She began these efforts when Black Georgians’ attention had turned strongly to politics after the killing of Ahmaud Arbery. The 2020 death of civil rights icon and longtime Congressman John Lewis brought more attention to racial inequality. Many people realized they had been disenfranchised and were suffering from “intolerance fatigue,” the feeling of being “sick and tired of being sick and tired.”

Abrams and Fair Fight benefited from the state’s 2016 implementation of the 1993 National Voter Registration Act, sometimes called the “motor voter” law, which gives people the opportunity to register to vote at the same time that they apply for or renew a driver’s license.

Altogether, that collective effort registered 800,000 new voters in Georgia since Abrams’ 2018 loss. Some of those were likely among the many that Secretary of State Kemp had forced off the rolls, but many were also people who had never before been registered to vote in Georgia.

In addition to getting people’s names on the voting rolls, these groups pushed the importance of actually voting and taught people how to vote safely, including by mail or in-person before Election Day. Their efforts resulted in a 63% increase over the 2016 statistics for mail-in and early in-person voting ballots cast.

An additional factor in the Georgia election result may have been President Donald Trump’s own statements discouraging his supporters from voting, but the real key was the grassroots organization, the modern echo of the Albany Movement, the Student Nonviolent Coordinating Committee and other efforts, that brought new voters into the fold.

Bev-Freda Jackson has in the past volunteered occasionally for the National Council of Negro Women and the NAACP.