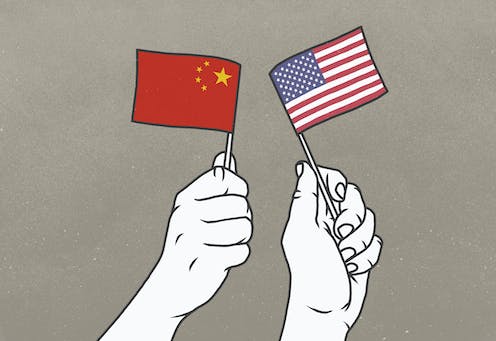 President Biden has so far kept most of his predecessor's tough-on-China policies.Malte Mueller via Getty Images

President Joe Biden is so far maintaining his predecessor’s tough China policy, which aims to curb China’s international power both economically and politically.

In the U.S. and Europe, China is widely recognized as a rising star that threatens Western power.

But my research on the country suggests China may no longer see itself that way.

In the three decades I’ve studied and taught Chinese foreign policy, I have witnessed three discrete eras in China’s approach to international relations.

After the death of the Communist Chinese leader Mao Zedong in 1976, Mao’s successors, Deng Xiaoping and Jiang Zemin, introduced economic reforms that launched China on a path of phenomenal economic growth. The country rose from 11th to second place in the global GDP rankings between 1990 and 2020.

The prevailing view in Western capitals in the 1990s was that China’s economic transformations would inevitably culminate in an affluent, peaceful and democratic country.

To ensure this outcome, the major economic powers were prepared to embrace China as a full member of their club of open-market societies, admitting it into international institutions like the World Trade Organization and integrating it into global markets. The West was keen to bring it into this network of international political institutions constructed after World War II to promote cooperation and peaceful conflict resolution.

And China was happy to join the club, at least when it came to trade and investment. Chinese leader Deng Xiaoping’s foreign relations strategy in the 1990s was to “hide capabilities and bide time,” adopting a policy of “tao guang yang hui” – keeping a low profile.

In the early 2000s, President Hu Jintao took a few modest steps toward greater Chinese assertiveness on the world stage, building up China’s navy and initiating a series of port projects in Pakistan and beyond. For the most part, however, Hu still espoused a policy of “peaceful rise.”

Xi projected nationalism and power. His China would no longer bide its time. Xi proclaimed the “China Dream,” envisioning the country as a major power with increasing influence not just in Asia but worldwide. 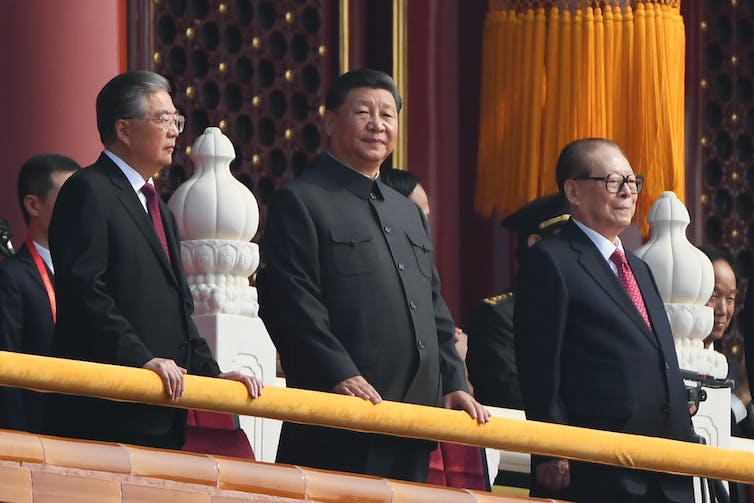 Under Xi, China took a much more aggressive stance toward the world, flexing its military muscle in the South China Sea and elsewhere, and coupling diplomacy with heavy investment in infrastructure development across Latin America and Africa.

Over time, many Western foreign policy leaders, among them Barack Obama, came to see China as bent on upending, not sustaining, the economic order they had created and enthusiastically welcomed China into.

In 2015, the U.S. undertook a “strategic pivot” toward Asia and away from the Middle East, the focus of Washington’s attention since 9/11.

In an effort to contain – or at least constrain – China, the U.S. strengthened alliances with Australia, Japan, South Korea and the Philippines, formed a coalition of countries in China’s neighborhood, and increased defense cooperation with India, Australia and Japan.

In October 2017, at the National Congress of the Chinese Communist Party, Xi confirmed Western fears. He publicly declared his goal of moving China to the “center stage” of world affairs.

Xi said China did not seek global domination but warned that no one “should expect China to swallow anything that undermines its interests.” He also hinted that China’s rise would create a world order with “Chinese characteristics.” 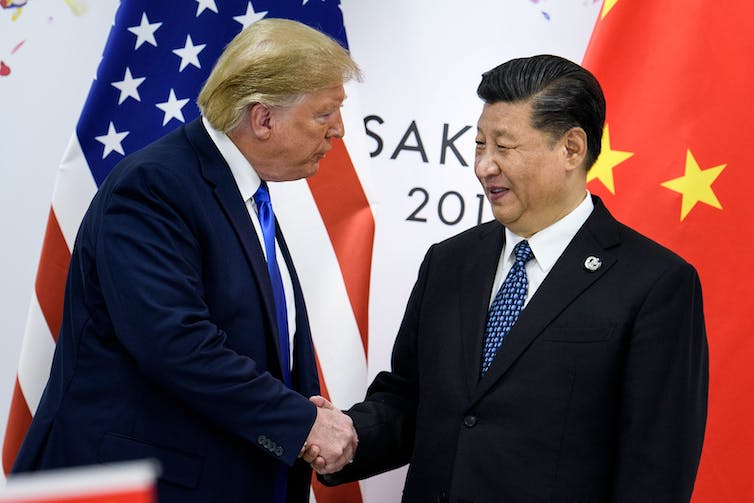 Trump, who saw China as a serious threat, had a combative relationship with Xi.Brendan Smialowski/AFP via Getty Images

China against the world

But the China dream isn’t guaranteed to come true. As President Xi told Communist Party members at a gathering in January 2019, the country faces serious challenges

Then there are China’s troubling demographics: The population is both shrinking and getting old.

China’s population declined in 2018 for the first time since the deadly famines induced by Mao’s “Great Leap Forward” in the 1960s. The Chinese Academy of Science predicts that if fertility continues to drop from its current rate of 1.6 children per woman to a projected 1.3, China’s population would be reduced by about 50% by the end of this century.

China ended in 2015 its policy of limiting families to one child, but its population still skews old, leaving fewer workers to support increasing numbers of elderly.

Together, these predictions have raised concerns within the Chinese Communist Party that the nation will “get old before it gets rich.” This predicament could create serious social unrest.

Xi and others in China’s Communist leadership no longer project unbridled confidence. Instead, they telegraph concern that global leadership is slipping out of reach.

These concerns are already reshaping China’s foreign policy, leading it to take increasingly direct military action toward neighboring India – where it is engaged in a territorial dispute in the Himalayas – and near Taiwan. China is also redoubling its military efforts to assert its territorial rights to disputed islands the South China Sea and cracking down on democracy in Hong Kong.

This is the first time in six decades that China and the West hold such fundamentally different views of China’s global trajectory.

The results could be destabilizing. If a weakened China feels threatened by Western containment, it may double down on its nationalistic displays in India, Taiwan, Hong Kong and the South China Sea.

The post-World War II international order, built to promote economic cooperation and avoid war, may not be able to withstand the stress of China’s mounting challenges from within. A war between the West and China is still a remote possibility, but perhaps not as remote as it once seemed.

Andrew Latham does not work for, consult, own shares in or receive funding from any company or organization that would benefit from this article, and has disclosed no relevant affiliations beyond their academic appointment.