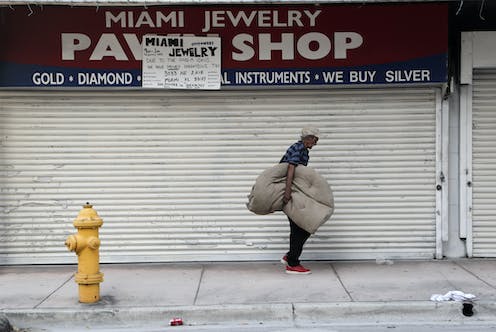 About 1 in 9 Americans live below the poverty level.AP Photo/Lynne Sladky

Poverty in the U.S. increased in 2020 as the coronavirus pandemic hammered the economy and unemployment soared. Those at the bottom of the economic ladder were hit hardest, new figures confirm, suggesting that the recession may have widened the gap between the rich and the poor.

This metric includes wages and other sources of income, such as Social Security payments and, quite significantly in 2020, unemployment benefits. Without the massive boost in unemployment benefits that flowed to millions of jobless Americans for more than a year, the poverty rate would surely have climbed much higher.

As a social scientist who researches poverty, I’m concerned about the severe income loss some Americans experienced and signs that the nation’s extreme income inequality only got worse in 2020.

Those at the bottom of the economic scale, hit much harder by the coronavirus recession, are finding it harder to bounce back, according to additional data the Census Bureau released. It’s what has been termed a K-shaped recovery.

At the same time, full-time year-round workers saw their real median earnings increase 6.9% from 2019 levels – indicating that losses were borne primarily by part-time workers and people who aren’t employed throughout the whole year.

In another sign that low-income workers were hit the hardest in 2020, 53% of all jobs lost were held by workers earning less than $34,000 per year.

It’s unclear whether these inequality-exacerbating trends are continuing in 2021 or will be sustained in the years to come. But in June 2021, employment for low-wage workers had fallen by 21% from January 2020 levels, while employment for high-income workers had gained 9.6%.

Some success for stimulus and relief measures

The impact of the stimulus and supports is much more apparent in the Supplemental Poverty Measure rate, which takes into account additional sources of income, such as tax credits and other government benefits.

Without the series of relief and stimulus packages implemented between March 2020 and the end of the year, the supplemental poverty rate would have reached 12.7%, the Census said. Instead it stood at only 9.1%, 2.6 percentile points lower than what it otherwise would have been.

Elena Delavega does not work for, consult, own shares in or receive funding from any company or organization that would benefit from this article, and has disclosed no relevant affiliations beyond their academic appointment.