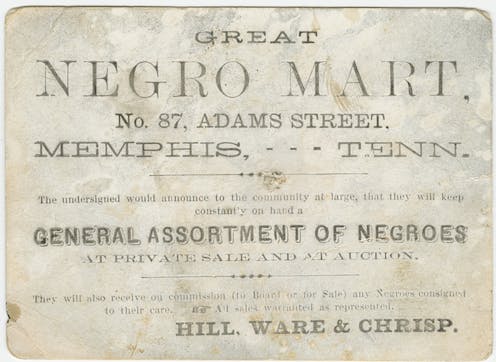 A trade card with printed black type for the domestic slave traders Hill, Ware and Chrisp.Collection of the Smithsonian National Museum of African American History and Culture

For my recently published book, “The Ledger and the Chain,” I visited more than 30 archives in over a dozen states, from Louisiana to Connecticut. Along the way, I uncovered mountains of material that exposed the depravity of the men who ran the largest domestic slave trading operation in American history and revealed the fortitude of the enslaved people they trafficked as merchandise.

But I also learned that many Americans do not realize that a domestic slave trade existed in the U.S. at all.

Mentioning my research to others repeatedly provoked questions about Africa, not America. They obviously assumed that a scholar working on the slave trade must be working on the trade that brought millions of Africans to the Western Hemisphere via the terrifying Atlantic Ocean crossing known as the Middle Passage.

They did not appear to know that by the time slavery ended in 1865, more than 1 million enslaved people had been forcibly moved across state lines in their own country, or that hundreds of thousands more had been bought and sold within individual states.

Americans continue to misunderstand how slavery worked and how vast was its reach – even as the histories of race and slavery are central to ongoing public conversations.

Enslaved people were bought and sold within the boundaries of what is now the United States dating back to the Colonial era. But the domestic slave trade accelerated dramatically in the decades after 1808.

That year, Congress outlawed the importation of enslaved people from overseas, and it did so at a moment when demand for enslaved laborers was booming in expanding cotton and sugar plantation regions of the lower South. 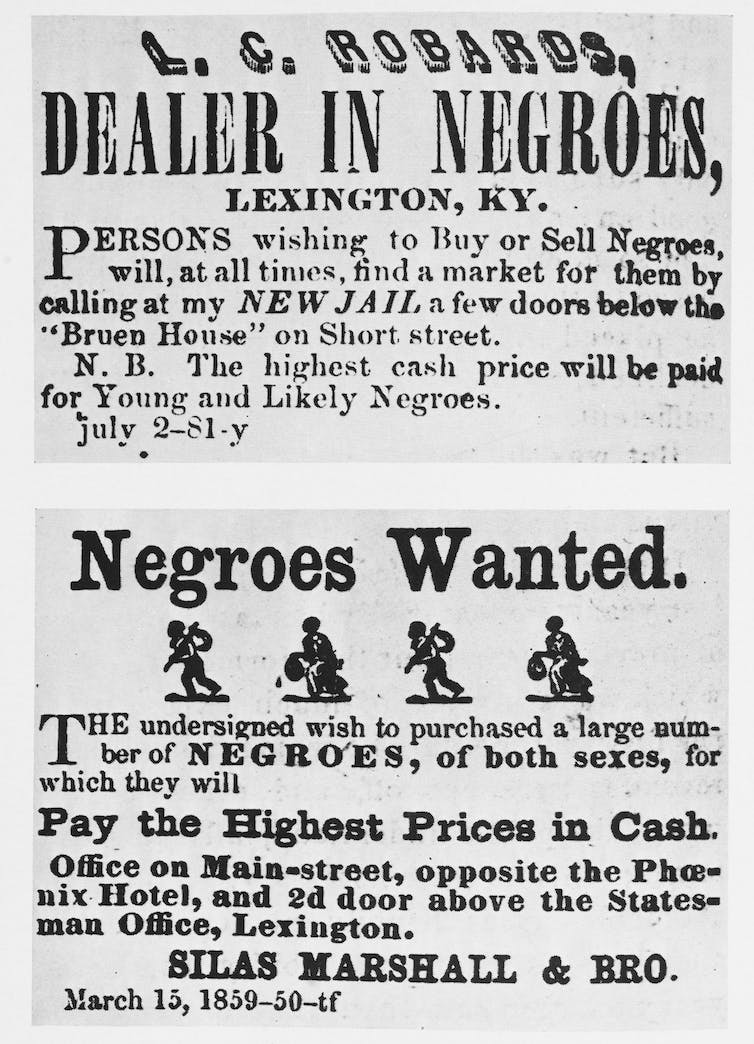 Growing numbers of professional slave traders stepped forward to satisfy that demand. They purchased enslaved people primarily in upper South states like Maryland and Virginia, where a declining tobacco economy left many slaveholders with a surplus of laborers. Traders then forced those enslaved people to migrate hundreds of miles over land and by ship, selling them in Alabama, Mississippi, Louisiana and other states where traders hoped to turn a profit.

The domestic slave trade was a brutal and violent business. Enslaved people lived in constant fear that they or their loved ones would be sold.

William Anderson, who was enslaved in Virginia, remembered seeing “hundreds of slaves pass by for the Southern market, chained and handcuffed together.” Years after he fled the South, Anderson wrote of “wives taken from husbands and husbands from wives, never to see each other again – small and large children separated from their parents,” and he never forgot the sounds of their sorrow. “O, I have seen them and heard them howl like dogs or wolves,” he recalled, “when being under the painful obligation of parting to meet no more.”

Slave traders were largely indifferent to the suffering they caused. Asked in the 1830s whether he broke up slave families in the course of his operations, one trader admitted that he did so “very often,” because “his business is to purchase, and he must take such as are in the market.”

Domestic slave traders initially worked mostly out of taverns and hotels. Over time, an increasing number of them established offices, showrooms and prisons where they held enslaved people whom they intended to sell.

By the 1830s, the domestic slave trade was ubiquitous in the slave states. Newspaper advertisements blared “Cash for Negroes.” Storefront signs announced that “dealers in slaves” were inside. At ports and along roads, travelers reported seeing scores of enslaved people in chains. 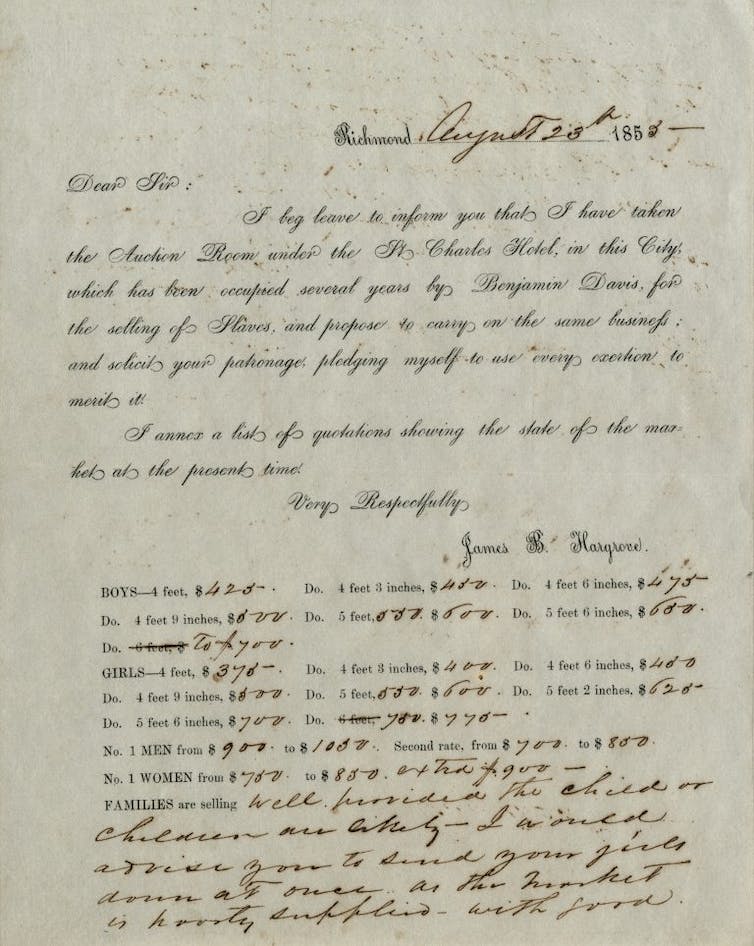 An 1852 letter from James B. Hargrove quotes the market prices for enslaved men, women and children.Library of Virginia

Meanwhile, the money the trade generated and the credit that financed it circulated throughout the country and across the Atlantic, as even European banks and merchants looked to share in the gains.

The more visible the trade became, the more antislavery activists made it a core of their appeals. When abolitionist editor Benjamin Lundy, for example, asked white Americans in the 1820s how long they could look at the slave trade and “permit so disgraceful, so inhuman, and so wicked a practice to continue in our country, which has been emphatically termed THE HOME OF THE FREE,” he was one among a rising chorus.

But abolitionists made little headway. The domestic slave trade ended only when slavery ended in 1865.

Vital to the American economy, important to American politics and central to the experience of enslaved people, the domestic slave trade was an atrocity carried out on a massive scale. As British traveler Joseph Sturge noted, by the 1840s, the entire slaveholding portion of the United States could be characterized by division “into the ‘slave-breeding’ and ‘slave-consuming’ States.”

Yet popular historical knowledge of the domestic trade remains hazy, thanks largely to purposeful forgetting and to a propaganda campaign that began before the Civil War and continued long past its conclusion.

White Southerners made denial about the slave trade an important tenet in their defense of slavery. They claimed that slave sales were rare, that they detested the slave trade and that traders were outcasts disdained by respectable people.

Kentucky minister Nathan Lewis Rice’s assertion in 1845 that “the slave-trader is looked upon by decent men in the slave-holding States with disgust” was such a common sentiment that even white Northerners sometimes parroted it. Nehemiah Adams, for example, a Massachusetts resident who visited the South in 1854, came away from his time in the region believing that “Negro traders are the abhorrence of all flesh.” 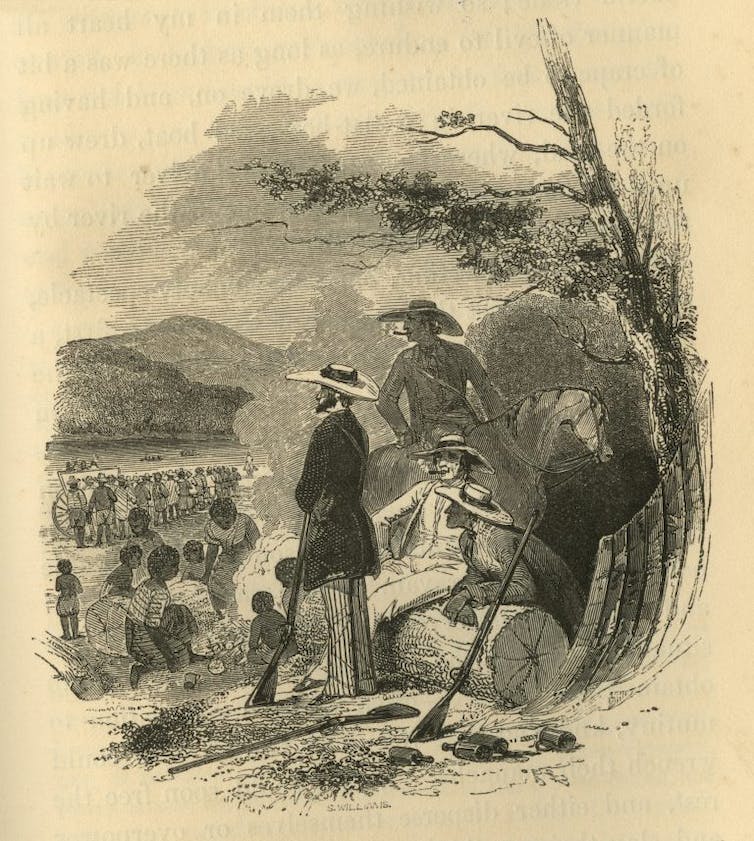 Franklin and Armfield slave trading company partner John Armfield watching over enslaved men and women chained together who he and several employees were moving south from Virginia.John Murray/Library of Virginia

Such claims were almost entirely lies. But downplaying the slave trade became a standard element of the racist mythology embedded in the defense of the Confederacy known as the Lost Cause, whose purveyors minimized slavery’s significance as they discounted its role in bringing about the Civil War.

And while the Confederacy may have lost on the battlefield, its supporters arguably triumphed in the cultural struggle to define the war and its meaning. Well into the 20th century, significant numbers of white Americans throughout the country accepted and embraced the notion that slavery had been relatively benign.

As they did so, the devastations of the domestic slave trade became buried beneath comforting fantasies of moonlight and magnolias evoked by movies like “Gone With the Wind.”

Recent years have seen monuments to the Confederacy coming down in cities and towns across the country. But the struggle over how Americans remember and talk about slavery, now perhaps more heated and controversial than ever, arguably remains stuck in terms that are legacies of the Lost Cause.

Slavery still conjures images of Southern farms and plantations. But the institution was grounded in the sales of nearly 2 million human beings in the domestic slave trade, the profits from which nurtured the economy of the entire country.

Until that history makes its way more deeply into our popular memory, it will be impossible to come to terms with slavery and its significance for the American past and present.

I do not currently receive any external funding, but fellowships from the American Council of Learned Societies, Virginia Humanities, and numerous other institutions did help fund the research that produced the scholarship reflected in this piece.