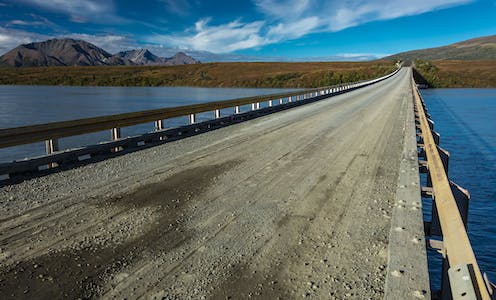 The Denali Highway as it crosses the Susitna River.Joe Sohm/Visions of America/Universal Images Group via Getty Images

America’s bridges are in rough shape. Of the nearly 620,000 bridges over roads, rivers and other waterways across the U.S., more than 43,500 of them, about 7%, are considered “structurally deficient.”

In Alaska, bridges face a unique and growing set of problems as the planet warms.

Permafrost, the frozen ground beneath large parts of the state, is thawing with the changing climate, and that’s shifting the soil and everything on it. Bridges are also increasingly crucial for rural residents who can no longer trust the stability of the rivers’ ice in spring and fall.

The infrastructure bill making its way through Congress currently includes US$40 billion in new federal funds for bridge construction, maintenance and repairs – the largest investment in bridges since construction of the interstate highway system started in the 1950s. In that funding is about $225 million to address 140 structurally deficient bridges throughout Alaska.

Given the high cost to build and maintain bridges in rural Alaska, and the increasing risk to their structures as the climate warms, we believe the bill is a good start but hardly sufficient for a growing rural problem.

Increasing need for bridges as the planet warms

Alaska is warming faster than any other U.S. state. As Alaska’s temperature rises, rivers and lakes are freezing later, thawing earlier and forming thinner ice.

When the ice is unstable or unpredictable, people who rely on crossing the river are stuck and the risk of snowmobile fatalities rises. Rural residents often use rivers to travel between communities, either as icy roads in winter or waterways in summer, and they often have to cross rivers to hunt, gather traditional foods or reach health care facilities.

Alaska has just over 1,600 bridges that are open to the public – the fourth-lowest total of any state, despite being the largest state by land area. Only about 44% of those bridges are considered to be in good shape. 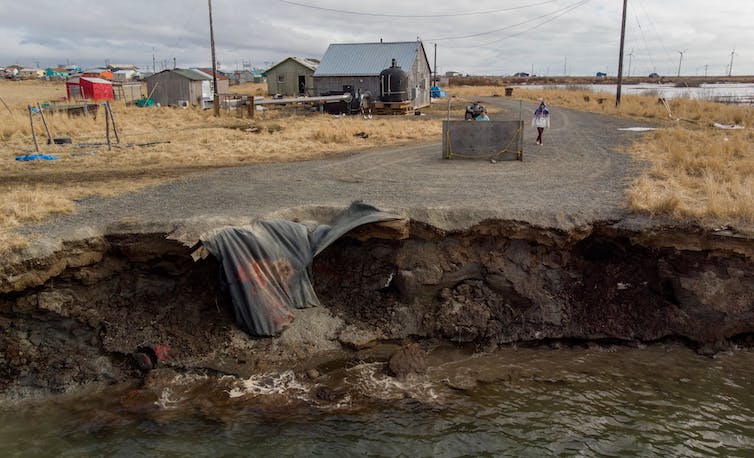 Thawing permafrost and erosion conspire to eat away the land beneath a road in the Yup'ik Eskimo village of Quinhagak on the Yukon Delta in 2019.Mark Ralston/AFP via Getty Images

Building bridges here is an expensive, complex process, and they require long-term maintenance that gets complicated in rural areas. It’s a challenge with two important facets: one is structural, and the other human.

Engineering: The problem of permafrost

From an engineering perspective, bridges are vulnerable to the effects of climate change. They are particularly sensitive to seasonal freezing effects, which can quickly change their mechanical properties and structural integrity.

Alaska has some of the harshest conditions for infrastructure, with temperatures ranging from minus 80 degrees Fahrenheit (minus 62 Celsius) to 100 F (37.8 C). Snowfall can reach 81 feet (24.7 meters) per year in some areas, and an ice-rich permafrost underlies 80% of the state.

One of the most important factors affecting the service life of a bridge is corrosion of the reinforcing steel. As permafrost thaws and water becomes liquid, it can accelerate corrosion and cause other types of damage.

A variety of techniques have been used to minimize the effects of cracking, but damage from freezing and thawing still plays a significant role in limiting the lifespan of a bridge. After a bridge is built, it requires regular monitoring to ensure it remains in good condition. That’s difficult in areas that are remote and where harsh weather can be challenging. 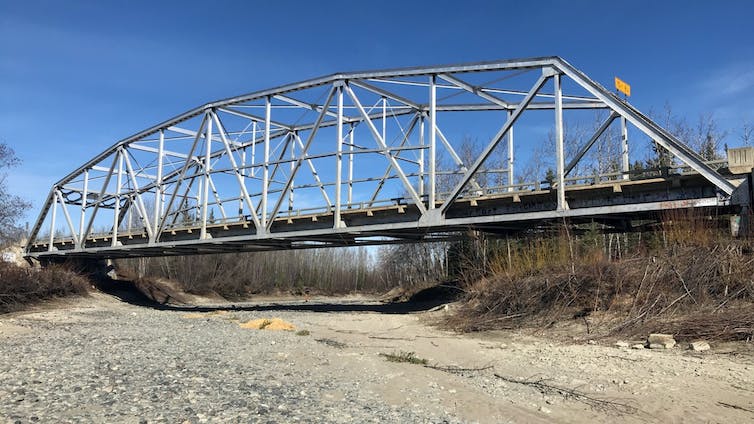 This World War II-era truss-style bridge on the Alaska Highway near Tok was recently replaced by a detour.Alaska Department of Transportation and Public Facilities via AP

Another major engineering challenge for rural areas is human-dependent bridge inspection, which limits how often bridges can be inspected and presents significant safety risks for inspectors. One exciting development in maintenance involves advances in drone technology. Bridge inspections could be done safely by drones and at more reliable intervals, but that too involves investment.

The cost of delivering steel and concrete to a remote location, sourcing available local materials and bringing in outside specialized labor can significantly increase the cost of a bridge. For example, the 2015 Construction Cost Survey in Alaska found that home construction, based on materials alone, is three times more expensive in Barrow, a remote community in the North Slope of Alaska, than in Anchorage, the state’s largest city. 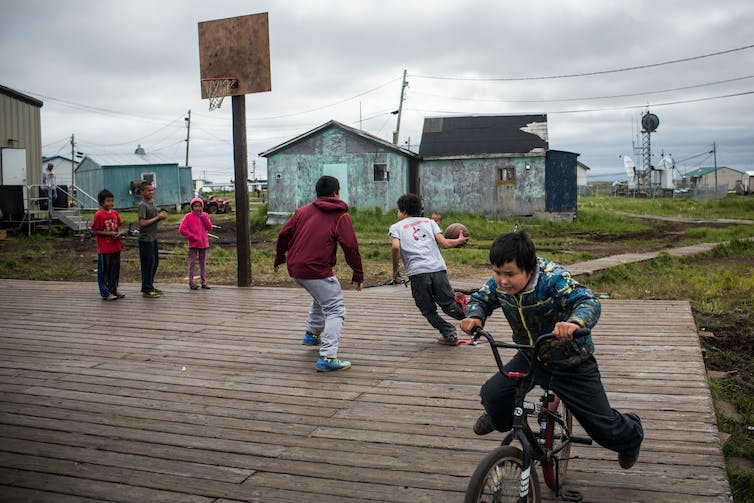 Children play in Newtok, Alaska, in June 2015. The town is losing ground to flooding as permafrost thaws, and many residents have relocated to a new community across the river.Andrew Burton/Getty Images

In rural Alaska, the process of building bridges is complex and can take many years. It depends on cooperation, often among several communities, navigating state processes and support of political leaders. It’s critical to understand from the beginning how a bridge’s construction will affect community well-being and how communities can work together on funding, design, construction and maintenance.

Our team of engineers and social scientists is working on a guide to successful bridge funding, construction and maintenance for remote areas that establishes a community-driven process.

Alaska has no income tax or statewide sales tax and has been facing a fiscal crisis as state oil revenues have fallen. Federal infrastructure investment could help direct funds to rural bridges that might otherwise continue to deteriorate.

Davin Holen receives funding from the National Science Foundation, the US Fish and Wildlife Service, the National Park Service, and the National Oceanic and Atmospheric Administration.