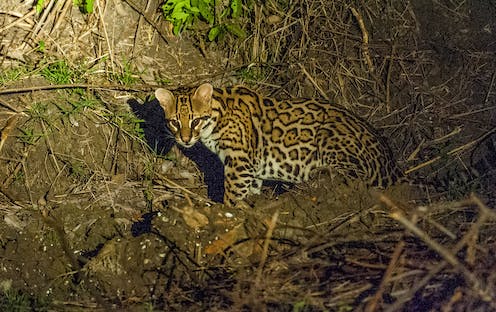 The female ocelot lay anesthetized on the exam table, behind the scenes at the Albuquerque Biopark Zoo. As a veterinarian on the team preparing to artificially inseminate this animal, my palms were sweating at the thought of missing a step, dropping the sperm sample, or finding out our sample did not survive freezing. Any of these possibilities would end the procedure.

It was the first time anyone was trying to produce a pregnancy in a zoo-born female ocelot using sperm recovered from a deceased wild male ocelot. If the July 2021 operation worked, it would give his genes a way to live on past his death. This procedure was an important step in efforts to conserve endangered cat species so they can persist into the future.

Ocelots are medium-sized felines weighing around 20 to 30 pounds (9 to 13 kilograms) with sleek spotted coats. Their diet consists of small mammals, rodents, amphibians, reptiles and birds. Ocelots are primarily solitary cats, most active in the evening from dusk to dawn.

While people manage zoo-housed ocelots’ reproduction to maintain genetic diversity, it’s a different story for their wild relatives. There are currently only 50 to 80 ocelots (Leopardus pardalis) known to exist in the wild in the U.S., and that population is too small to be sustainable long term. These endangered animals face ongoing threats of habitat loss and fragmentation, and vehicle strikes. And because of their diminished numbers, they are at risk of inbreeding. 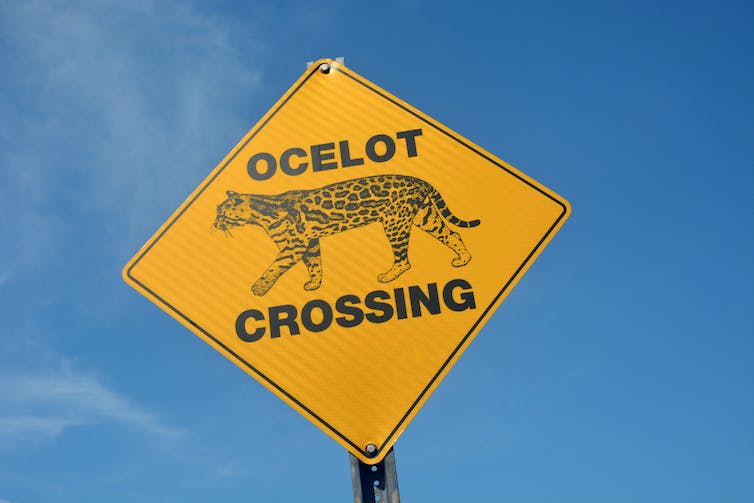 With so few individuals left in the wild in the U.S., each ocelot hit by a car could affect the species’ survival.kzubrycki/iStock via Getty Images Plus

Over the past 25 years, scientists at the Center for Conservation and Research of Endangered Wildlife, or CREW, led by veterinarian Bill Swanson, have been working on technologies that may eventually help add some more genetic diversity to the wild ocelot population. They’ve developed and refined techniques for sperm collection, frozen storage and artificial insemination of ocelots and other endangered cat species.

These innovations have played a key role in sustaining the genetic diversity of cat populations within zoos. Now, we’re trying to go a step further and apply these techniques in wild ocelots.

By creating gene flow among zoo-based ocelots and wild ocelots in different regions, we can increase the genetic diversity of both populations. With wild ocelots, we hope to combat their declining ability to produce offspring, fight infection and maintain adequate numbers in the wild for conservation of the species in the U.S.

As a recently graduated veterinarian, I joined my mentor, Debra Miller, at the University of Tennessee’s Comparative and Experimental Medicine Department and in her work at UT’s Center for Wildlife Health. From there, my interests in wildlife conservation led me to this multi-institutional collaboration focusing on the conservation of wild Texas ocelots.

This project relies on the routine collection and freezing of semen from wild ocelots in the field – usually living animals, but sometimes ones that have been found dead. Our semen stockpile lets us preserve genetic material even if these cats are killed by disease, natural disasters or road collisions. 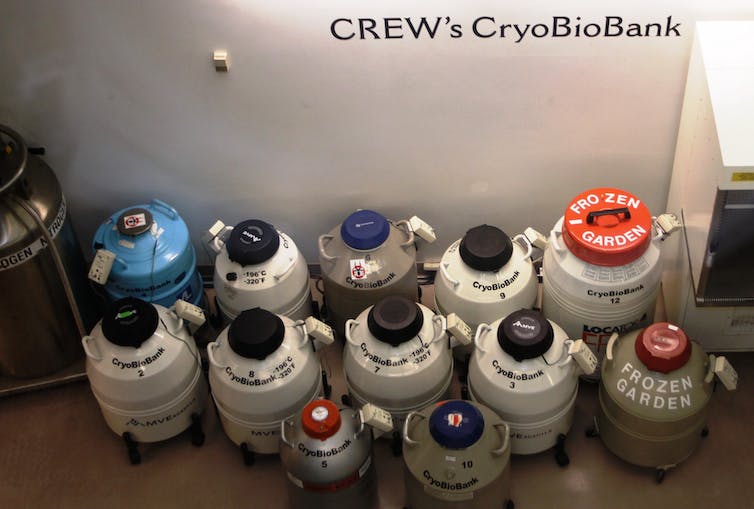 The CREW CryoBioBank at the Cincinnati Zoo currently holds over 20,000 total semen samples from 82 animal species ranging from elephants to salamanders – including 30 cat species/subspecies – at temperatures of -320 F (-196 C) in liquid nitrogen.Tom Uhlman, CC BY-ND

For the artificial insemination procedure this past summer, the sperm donor was a Texas ocelot that died after being hit by a car. While this male’s death was a tragedy, there is a chance his genes may live on in future offspring thanks to the quick report of his death and the retrieval, shipping and processing of his gonads. 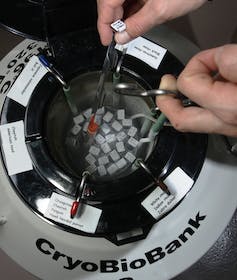 Thirteen 0.25-milliliter semen straws are in each goblet tube within the canisters inside the frozen storage tank.Tom Uhlman, CC BY-ND

Back at CREW in Cincinnati, Bill Swanson worked to recover the cat’s sperm for future artificial insemination procedures. He froze 20 plastic straws, each containing about 8 million viable sperm. In addition to this deceased male, I have collected and cryopreserved semen from several living wild males for future use.

By testing thawed semen, our team has found that many of these sperm samples were capable of fertilizing cat eggs in vitro. The next step is figuring out whether the frozen wild ocelot semen really can produce kittens via artificial insemination. So Swanson packed up three frozen straws to ship to Albuquerque in a liquid nitrogen dry shipper tank to make sure they remain at -320 F (-196 C) throughout the journey.

After the thaw, hoping for kittens

Ocelots are induced ovulators, meaning a female must mate in order to release an egg into her reproductive tract. The female we were working with was treated with hormones to help her ovulate at the proper time relative to the insemination procedure. The relief was overwhelming when we confirmed, by laparoscopically looking at the surface of the ovary, that the female had ovulated multiple eggs.

After thawing the semen straws, my excitement began to increase because we could see the deceased ocelot’s sperm swimming rapidly across a slide under the microscope. The sperm had survived the freezing and thawing process and was still in great shape.

I took multiple deep breaths to steady my hands as my smile spread from ear to ear. Bill Swanson positioned the insemination needle within each oviduct, I injected the sperm into both sides of the female’s reproductive tract, and the procedure was complete.

Unfortunately, although the female responded well to the ovulation synchronization protocol, and the artificial insemination procedure was performed without a hitch, she did not conceive. That’s not an uncommon outcome when using frozen semen.

However, we are optimistic that future procedures – using semen samples from this specific male and other frozen samples from living, wild ocelots – will successfully produce pregnancies. By the end of 2021, we plan to conduct two additional artificial insemination procedures with zoo-managed ocelots, followed by three or four more in 2022. 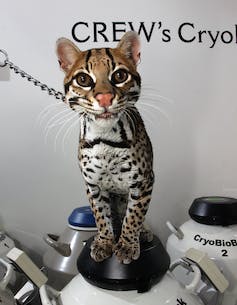 Sihil the ocelot began life as a frozen embryo in one of these liquid nitrogen cold storage tanks. Kittens born via artificial insemination will be the next step.Tom Uhlman, CC BY-ND

Further refinement of the knowledge and techniques to create genetic exchange between wild and zoo-managed ocelot populations or among wild ocelot populations living in fragmented habitats will help ensure that these animals survive into the future.