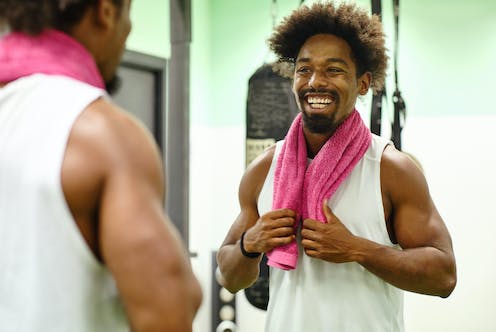 Behavioral science researchers have found that people tend to have more positive body self-images when they appreciate the body for what it can do – not just how it looks.Tempura/E+ via Getty Images

The COVID-19 pandemic has changed everyday life for many people in both trivial and profound ways. Embracing pants without a waistband, trying out creative baking – and perhaps spending a great deal of time sitting, whether for virtual meetings or Netflix binges.

For many people, these kinds of behaviors, coupled with the ongoing stressors and limitations of the pandemic, translated to pounds gained and newfound or increased feelings of discomfort about body image.

It may seem untimely to think about addressing weight loss or body image while still dealing with the uncertainties and pressures of the ongoing pandemic. However, science has shown that living through disasters and personal upheavals often causes a shift in life priorities and thinking more about the value of one’s own life. Science also reveals that life disruptions can be a great time to think about, and bring about, habit change.

I’m a developmental psychologist and health coach. I’ve taught university students about cognition and motivation for the past 20 years, as well as about lifelong physical and mental well-being. Behavioral scientists find that when these sorts of upheavals disrupt regular routines, it can become easier than ever before to get rid of unhealthy behaviors and replace them with positive changes in personal habits.

That said, this isn’t another article about how to lose weight. It’s not intended to provoke a knee-jerk reaction like pursuing a Jennifer Lopez rear or Chris Hemsworth-y lats.

Instead, I am inviting people to redefine “the ideal body” by better appreciating the body’s functionality – what it can do – rather than focusing mostly on how it appears.

According to Merriam-Webster, an ideal is a “standard of perfection, beauty or excellence.”

However, respecting and appreciating one’s body for what it can do, rather than how it looks or compares to cultural ideals, can positively influence body image. For example, behavioral scientists have found that exercising for health, enjoyment and wellness is associated with a positive body image and healthy eating habits, while a more negative body image is associated with exercising for appearance-related reasons.

There are physical benefits as well. For example, putting an emphasis on fitness goals, rather than weight loss, has been shown to enhance longevity. Scientists have also found that exercise can reduce an adult’s risks for a severe case of COVID-19 as well as potentially deadly complications.

On top of all this, as journalist Charles Duhigg reports in his book “The Power of Habit,” experts have found that exercise is a keystone habit that often supports adopting other positive health behaviors, such as better nutrition. 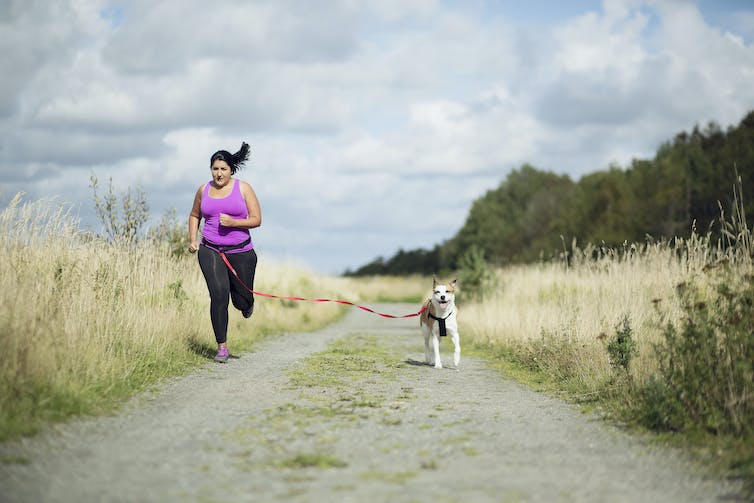 To successfully change an old habit for the better, it’s important to create an environment that supports the new goal – such as picking out exercise clothes the night before for an early morning walk or run.Zing Images/Digital Vision via Getty Images

As a psychologist, I am aware that we are an appearance-oriented culture. I’m not suggesting that people disregard aesthetic goals.

Rather, I’m suggesting that looking to other people to define one’s own body image ideals can be maladaptive. This is especially true when people choose celebrity icons and social media influencers as their ideals. For instance, there’s evidence that comparing one’s own appearance to images of celebrities is associated with both body image dissatisfaction and disordered eating.

Research suggests that the most effective role models are people with whom one identifies or shares some similarities. This makes it easier to set goals that are attainable, rather than focusing on the public images of celebrity icons. Here, too, it is important that the goals are realistic and applicable to people’s own lives. It’s also important that they avoid making appearance comparisons to people that they know, as this can also lead to body dissatisfaction.

Setting attainable goals instead involves focusing on specific behaviors to which one can commit. For example, if someone sets a goal of moving with greater ease, they might plan on going to the gym for 30 minutes three times per week. If the goal is fitting into pre-pandemic clothing, they might eliminate a less-than-healthy snack from the daily eating routine.

These are actions that people can control directly, whereas it is unclear how one would achieve the appearance or weight of a particular celebrity or friend.

Clarifying the personal meaning of “ideal body” isn’t just a thought experiment. Understanding one’s values helps in setting goals and then establishing habits in daily life to achieve them.

Using myself as an example: As a 48-year-old, my personal body image ideal involves becoming as strong as possible as I age. I don’t want to feel or look delicate, so my workouts primarily involve resistance training – with some running thrown in for stress relief. These are attainable because I value the benefits of these activities.

To be sure that I will maintain my exercise routines, I schedule them in advance so that I know exactly how I will fit them into my day rather than leaving it up to chance and forgoing them entirely or doing them too close to my bedtime, which interferes with my sleep.

For role models, I look to the behavior of other strong women – such as the women of Girls Gone Strong, an organization that promotes women’s health and strength through fitness – to inspire me to achieve my goals.

Even after figuring out personal body image values and setting attainable goals, it can still be hard to let go of older unhealthy habits. Wendy Wood, a University of California psychologist and foremost expert in this arena, has found that many behaviors are activated automatically by being in a context – a location – that has past associations with that behavior. Further, those associations matter more than a person’s current goals.

[More than 140,000 readers get one of The Conversation’s informative newsletters.Join the list today.]

Say that attaining one’s body image and fitness goals involves taking a brisk walk every morning. Turning that into a habit means avoiding past behaviors – don’t set the coffee maker to make the morning java, turn on the television or check the phone before the walk – as well as adopting new behaviors, such as setting out the right clothes the night before and establishing a route in advance.

How to get started? A fruitful first step might be to ask: In what ways has the pandemic crisis changed my life values, priorities and attitudes? The answers may be a good foundation for successfully making a healthy shift in body ideals.

Janet J. Boseovski does not work for, consult, own shares in or receive funding from any company or organisation that would benefit from this article, and has disclosed no relevant affiliations beyond their academic appointment.