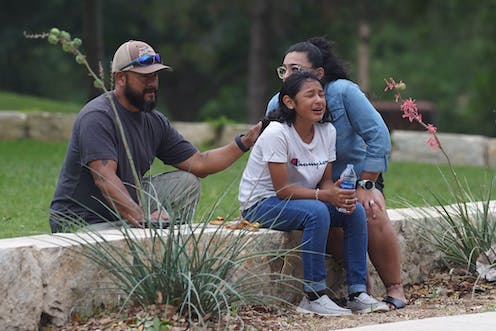 A girl cries outside the Willie de Leon Civic Center in Uvalde, Texas, on May 24, 2022.Allison Dinner/AFP via Getty Images

Calls for new gun legislation that previously failed to pass Congress are being raised again after the May 24, 2022, mass shooting at an elementary school in the small town of Uvalde, Texas.

An 18-year-old shooter killed at least 19 fourth grade students and two teachers at Robb Elementary School, marking the deadliest school shooting in the U.S. in a decade.

The U.S. has been here before – after shootings in Tucson, Aurora, Newtown, Charleston, Roseburg, San Bernardino, Orlando, Las Vegas, Parkland, El Paso, Boulder, and 10 days earlier at a grocery store in Buffalo, N.Y.

Gun production and sales in the U.S. remain high, following a purchasing surge during the COVID-19 pandemic. In 2021, the firearms industry sold about six guns for every 100 Americans.

Senator Chris Murphy of Connecticut was among the Democratic politicians who pleaded for action on gun control as horrifying details of the Uvalde school shooting unfolded.

“What are we doing?” Murphy asked other lawmakers, speaking from the Senate floor on the day of the shooting. “Why are you here if not to solve a problem as existential as this?”

Congress has declined to pass significant new gun legislation after dozens of shootings, including those that occurred during periods like this one, with Democrats controlling the House of Representatives, Senate and presidency.

In October 2021, 52% of people polled by Gallup said that they thought firearm sales laws should be made more strict.

I am a professor of strategy at UCLA and have researched gun policy. With my co-authors at Harvard University, I’ve studied how gun laws change following mass shootings.

Our research on this topic finds there is legislative activity following these tragedies, but it’s at the state level. 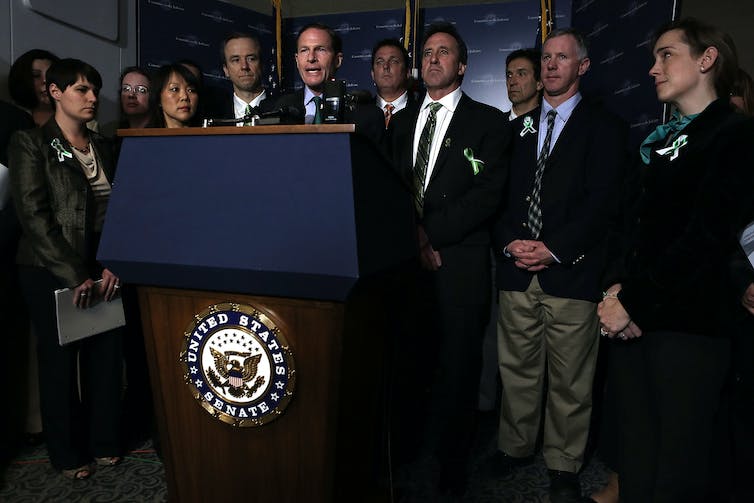 U.S. Senator Richard Blumenthal (D-Conn.) speaks to the media as teachers, parents and residents from Newtown, Conn. – where the Sandy Hook school massacre happened – listen after a Capitol Hill hearing on Feb. 27, 2013, on the Assault Weapons Ban of 2013.Alex Wong/Getty Images

Stricter gun laws at the national level are more popular among Democrats than Republicans, and major new legislation would likely need votes from at least 10 Republican senators. Many of these senators represent constituencies opposed to gun control.

Despite national polls showing majority support for an assault weapons ban, not one of the 30 states with a Republican-controlled legislature has such a policy.

U.S. Texas Senator Ted Cruz said on May 24 that more gun control laws could not have prevented the Uvalde attack, explaining “that doesn’t work, it’s not effective, it doesn’t prevent crime.”

The absence of strict control policies in Republican-controlled states shows that senators crossing party lines to support gun control would be out of step with the views of voters whose support they need to win elections.

But a lack of action from Congress doesn’t mean gun laws are stagnant after mass shootings.

To examine how policy changes, we assembled data on shootings and gun legislation in the 50 states between 1990 and 2014. Overall, we identified more than 20,000 firearm bills and nearly 3,200 enacted laws. Some of these loosened gun restrictions, others tightened them, and still others did neither or both – that is, tightened in some dimensions but loosened in others.

Contrary to the view that nothing changes, state legislatures consider 15% more firearm bills the year after a mass shooting. Deadlier shootings – which receive more media attention – have larger effects.

In fact, mass shootings have a greater influence on lawmakers than other homicides, even though they account for less than 1% of gun deaths in the United States.

As impressive as this 15% increase in gun bills may sound, gun legislation can reduce gun violence only if it becomes law. And when it comes to enacting these bills into law, our research found that mass shootings do not regularly cause lawmakers to tighten gun restrictions.

In fact, we found the opposite. Republican state legislatures pass significantly more gun laws that loosen restrictions on firearms after mass shootings.

In 2021, Texas Governor Greg Abbott signed a new law that eliminated a requirement for Texans to obtain a license or receive training to carry handguns. This came two years after a 2019 mass shooting at a Walmart in El Paso.

After the Buffalo shooting in early May 2022, New York Governor Kathy Hochul said that she would work to increase the age for legal gun purchasing from 18 to 21 “at a minimum.” 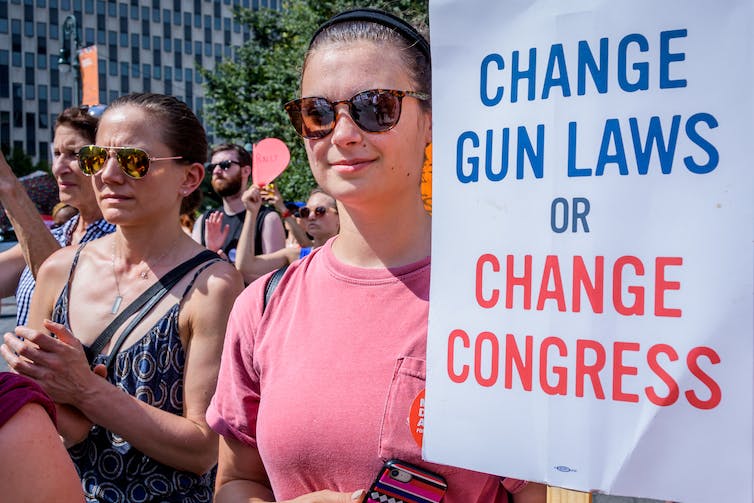 The contrasting response from Democrats and Republicans is indicative of different philosophies regarding the causes of gun violence and the best ways to reduce deaths.

While Democrats tend to view social factors as contributing to violence, Republicans are more likely to blame the individual shooters.

Cruz, for example, has said that stopping individuals with criminal records from committing violence could help prevent mass shootings.

In fact, gun sales often surge after mass shootings, in part because people fear being victimized.

Democrats, in contrast, typically focus more on trying to solve policy and societal problems that contribute to gun violence.

For both sides, mass shootings are an opportunity to propose bills consistent with their ideology.

Since we wrote our study of gun legislation following mass shootings, which covered the period through 2014, several additional tragedies have energized the gun control movement that emerged following the December 2012 shooting at Sandy Hook Elementary School in Connecticut. These include the May 2022 shooting at the Tops grocery store in Buffalo, as well as the Uvalde school massacre.

While President Joe Biden issued executive orders in 2021 with the goal of reducing gun violence, action in Congress remains elusive. States, meanwhile, have been more active on the issue.

With more funding and better organization, this new movement is better positioned than prior gun control movements to advocate for stricter gun policies following mass shootings. Public outcry and devastation over the Uvalde shootings will likely provide fuel to this advocacy work.

But with states historically more active than Congress on the issue of guns, both advocates and opponents of new restrictions should look beyond Washington for action on gun policy.

This is an updated version of an article originally published on March 21, 2021. This article was updated to indicate there were 10 days between the Buffalo, New York and Uvalde, Texas shootings.

Christopher Poliquin does not work for, consult, own shares in or receive funding from any company or organisation that would benefit from this article, and has disclosed no relevant affiliations beyond their academic appointment.