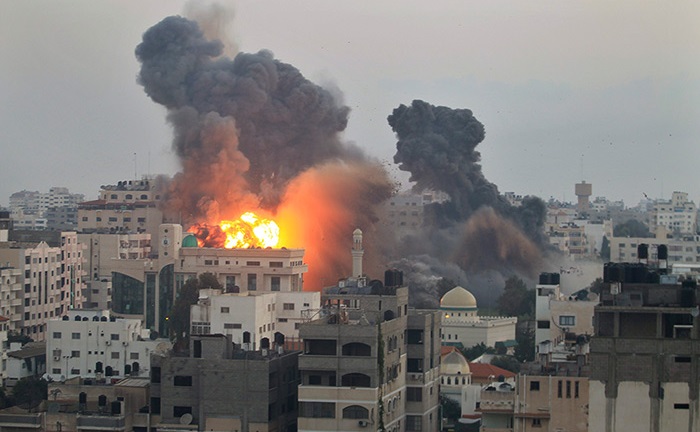 Israeli politicians across the political spectrum appear to support the attack on Gaza.

For several days now, some of my neighbours have suggested that the time has come to "destroy them"- meaning either Hamas or Palestinians - "once and for all". The rockets being fired from Gaza clearly do have the effect of raising the level of hysteria within Israel.

However, not only have the dozens of Grads been fermenting the spirit of war - government ministers, members of Knesset and leading media commentators have also been consistently pouring oil onto the fire. Indeed, it seems the only vocal criticism against Prime Minister Benjamin Netanyahu is that he is too soft on the Palestinians. There is no public debate about the necessity of another war, but only about how punitive Israel should be.

Immediately following the discovery of the three Jewish teenagers' bodies on June 30, Israel's security cabinet met. Although it was, by then, common knowledge that the higher echelons had known the boys were dead even as they launched a massive military operation in the West Bank two weeks earlier -  killing seventeen Palestinian civilians and arresting more than 500, including a number of Hamas members who had been released in the Shalit swap - the cabinet allegedly convened to discuss how Israel should respond to the boys' death.

Reportedly, the political and security leadership supported a "more moderate response," while the far-right wing economy minister and the head of the Jewish Home Party, Naftali Bennett, demanded a much harsher reaction. A few days later, Bennett complained that "Prime Minister Benjamin Netanyahu is undermining Israel's deterrence"; adding that "restraint following the execution of three children is a sign of weakness". Foreign Minister Avigdor Lieberman went so far so to dismantle the Likud-Beiteinu unity, blaming Netanyahu for "not striking Hamas hard enough".

In a similar vein, several prominent columnists urged Netanyahu to take a more belligerent stand.  Shaul Rosenfeld noted that Israel's restraint is outrageous and shameful. In an opinion piece for the popular news site Ynet he wrote: "'The regional power Israel has fallen to its knees to beg the murderous terrorist organisation to graciously give it some peace and quiet."

The public debate today is not whether or not to stop the air strikes but rather whether or not to deploy ground forces. In an opinion column, Channel 2's military correspondent Ronnie Daniel claimed that only "a ground operation will extract a heavy enough price from Hamas" in order to ensure a longer period of peace for Israel. The following day Channel 2's anchor pondered: "We wanted Hamas to fall on its knees and so far this has not happened"; and Daniel responded, "So far it's not happening, and the conclusion, in my opinion, is that it has not received enough."

Moreover, the editor-in-chief of the most widely circulated daily newspaper Israel Hayom, published an opinion article entitled "Bring the Gaza Strip back to the Stone Age." He immediately explained that he did not mean that Israel should reduce all of the houses in Gaza to rubble but rather to "destroy the weapon arsenal Hamas has accumulated over the past ten years. To pull out the snake's teeth. To leave them without missiles, with stones at the most. And this can only be done in or through an extensive ground operation."

While not all commentators were as blatant, the Israeli press has, overall, mobilised itself in the name of the national hysteria.  Most commentators for Haaretz, Yediot Ahronot, Ynet, and Ma'ariv concur that the current round of fighting was forced on Netanyahu and are also in general agreement in insisting that it is impossible to eradicate Hamas without recapturing the Gaza Strip, but note that at this stage the government is not interested in doing so.

A number of Likud members also object to a ground operation. Knesset Member Moshe Feiglin stated that "Our enemy is not only Hamas but the entire population that supports it and raises three fingers with pride while handing out candy as our sons are killed," he wrote, exclaiming: "We should not send a single soldier to Gaza! We do not even need to bomb houses and empty areas! We should simply deny them electricity, water, food and medicine until they fall on their knees."

Deputy Defence Minister Danny Danon, who has over 105,000 followers on his Facebook page, posted a poster of an aerial photo of Gaza showing a rocket being launched towards Israel. On the poster he wrote: "A billion and a half shekels debt to the electricity company; more than 360 rockets have been fired towards Israel; 0 rationale in transferring electricity and fuel to Hamas." Close to 33,000 people liked the poster, 6,700 shared it, and 1,200 commented on it, claiming, for example, "it is the leader head of your party [Netanyahu] who is to blame."

This is the atmosphere produced by the right wing government and the media, but what, one might ask, has been the reaction of the political parties sitting in the opposition?

Responding to a question posed by Channel 2's anchor, Labor leader and the head of the opposition Yitschak Herzog said: "…I think Israeli restraint has run its course and it's time to execute the blow that will restore the calm…" The anchor pressed Herzog, asking whether he supports a ground operation, but Herzog was unwilling to provide a direct response. Similarly, former Labor leader Shelly Yachimovitch, also expressed support for the military operation, adding that while she is one Netanyahu's harshest critics "it is impossible not to appreciate his responsible and restrained conduct in this crisis."

The leader of the liberal Meretz Party publically demanded an end to the operation, but in a conversation with Netanyahu she was quoted as saying that "You have to punish Hamas, but also strive for a diplomatic move, with the aid of the Egyptians, that will produce a cease-fire."

The only exceptions to this warmongering have been the usual suspects, people like Gideon Levy, Amira Hass and Uri Misgav from Ha'aretz who have harshly condemned the current round of violence. The voices of the Palestinian members of Knesset have not been heard in the Israeli media for the past several days, because, I suspect, they are adamantly against this cycle of violence and the demos does not really want to hear them.

Finally, the left has organised several protests, fifty people here a hundred people there, and, while often this is how resistance begins, it is not clear how within the current atmosphere these sober voices will amount to anything. It is a time of deep despair for all those who envision a different and brighter future for this land.

Neve Gordon is the author of Israel's Occupation.