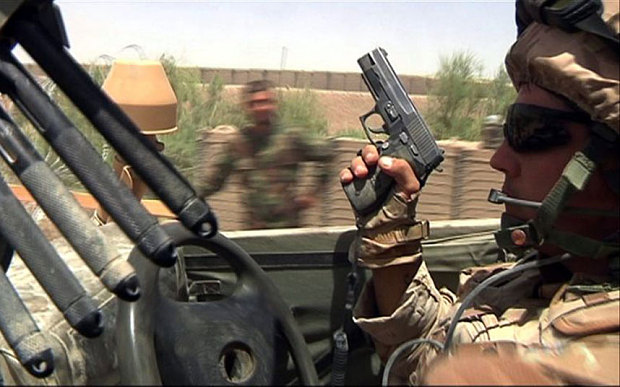 Adam Curties' documentary "Bitter Lake" documents brilliantly the total failure of the US intervention and the arrogance of its Western stooges in Afghanistan. There are two bitter Lakes in "Bitter Lake": The first one is roughly the midpoint of the Suez Canal, where US President Franklin D. Roosevelt and King Abdul Aziz al Saud of Saudi Arabia forged an alliance in 1945, which becomes slowly but surely an unholy one. The content of the agreement between the two was simple: The US guarantee the survival of the Saudi regime, at any cost. In return, the Saudis facilitate American supremacy in the region.

The second "bitter lake" is situated behind the Kajaki dam on the Halmand river that US companies constructed during the cold war in order to drag the country into the Western sphere of influence. One consequence of the dam was the rise of the water table leading to salinization of the soil. One crop thrived in the saltier earth: opium poppy. The US Empire and its allies have invaded Afghanistan to fight "terror" and to stop the Taliban's fight against opium cultivation. The US financial oligarchy in New York City had thereby lost every month about 300 million US dollars. Under Western occupation the opium production skyrocket.

The documentary shows the incongruity between the high-tech armored soldiers strolling through villages build with adobe hunting an invisible enemy. For the villagers, they must be like aliens. The soldiers were dragged into this mess by telling them they would fight an "evil enemy". In fact, they have sacrificed their lives for a corrupt political class in Kabul that created the problems the soldiers thought they were tackling.

At the end of the documentary, Curtis argues that the huge deployment of resources in Afghanistan was a "wasteful fraud". He asserts that the mangers of this Western occupation "stopped to think whether what had happened to the Russians 20 years before might also happen to them. That, in a strange way, Afghanistan has revealed to us the emptiness and hypocrisy of our own beliefs. And that we may be returning from there haunted by mujahidin ghosts, knowing that underneath we believe in nothing.”

The documentary shows also Western arrogance and hubris toward a foreign nation whose policy and culture has been regarded as backward. The occupiers wanted to destroy the Taliban, which means large parts of the Afghan population, and bring these "boonies" the blessings of the West: democracy, the rule of law, accountability, human rights and women rights and all the other wonderful things the West cherishes and the Muslims despise. After 14 unsuccessful years, the occupiers have just walked off and left the Afghans with the chaos alone. Especially since 9/11, the boundaries between good and evil, true and false, right or wrong are blurring. Who is going to fix it?