In 1988, a strange box with cables and keys like a typewriter arrived at Taylors Wines (known as Wakefield Wines in the northern hemisphere) – a family-run winery in Australia’s Clare Valley. 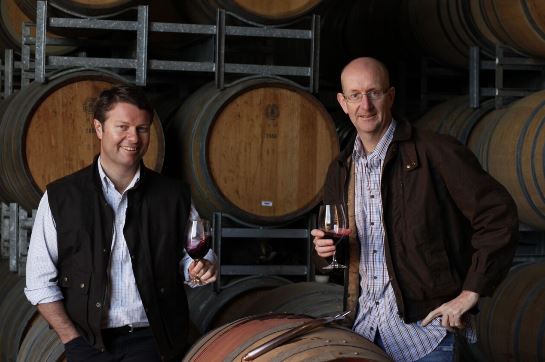 “It was our first computer and no one knew what to do with it,” recalls Taylors Wines CEOMitchell Taylor (WPO Sydney, WPO Greater Sydney, WPO Sydney Pacific). “My father begged me to show him and the staff how to operate it. When I had a look around, the wine industry appeared to be a fascinating business, and I decided to join.”

Known as “the driest continent in the world,” sustainability practices for Australian winemakers, and in particular South Australian winemakers, are not only a matter of good conscience, but of survival.  Wineries facing the present drought in the U.S. state of California – one of the most severe on record – could take a page from Taylors Wines’ playbook.

“We proactively ensure every drop of waste water is recycled and is returned to quality water we can put back into our vineyard,” says Mitchell. “Water is so rare, we have to be very frugal.”

This purifying process is accomplished by the winery’s water recycling plant, which gathers the waste from the wine making process and aerates it so the biological matter gets broken down. This matter is then filtered and put back into the vineyard.

Further water conservation methods include drip irrigation with sensors that dole out “need only” water to the vines and special liners on all dams to help mitigate water leakage.

“The majority of our irrigation is done in the cooler months and at night when there is not a lot of evaporation,” says Mitchell. “You really have to be very careful with water conservation.” 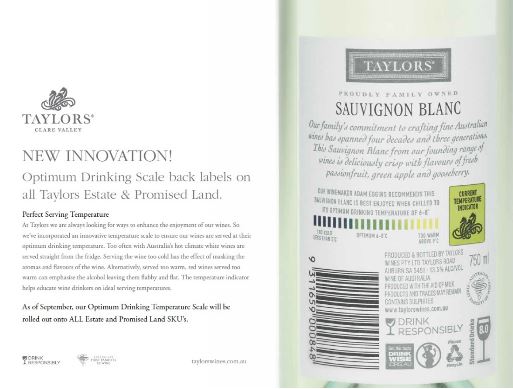 In 2009, Taylors Wines reintroduced sheep into their vineyards as a means of keeping grasses and weeds under control. This led to a reduction in the need for herbicides to control weeds and associated diesel fuel to run the tractors. A surprise benefit is the sheep’s manure waste acts as a natural fertilizer and soil conditioner.

In addition to a focus on environmental practices, Taylors Wines is dedicated to ensuring that consumers understand the hows, whys, whens and wheres of their product.

“We have had great breakthrough with the way we’ve been getting the message across by making sure the varietals are fully explained on the labels,” says Mitchell. “If a consumer isn’t familiar with the region, they can still understand the style of the wine and that is really the most important aspect of our communication.”

Taylors Wines most recent educational innovation is a temperature scale placed on the back of their wines. The scale shows the wine’s current temperature and ideal drinking temperature ; consuming a white wine too cold, results in a loss of flavor and aroma, leaving the consumer believing the wine lacks complexity. A wine served too warm can taste flat and alcohol-forward.

“When you’re doing things differently than the rest of the market, education is key so that people know the whole story,” says Mitchell. “Through innovation we can increase people’s drinking pleasure and an understanding about our obsession with quality.”

By now you may be asking, ‘Yes, but how do Taylors Wines taste?’

In the past 40 years, Taylors Wines have been awarded more than 4,700 medals including 58 Trophies, 652 Gold and 1,296 Silver medals. Taylorswon the Warren Winiarski Trophy for Cabernet Sauvignon for its 2010 vintage St. Andrews Cabernet Sauvignon at the London International Wine and Spirits competition. One of the World’s most respected wine competitions, it attracted 10,000 entries from 35 countries. In 2015, they were once again awarded the highest possible rating – a coveted five red stars by leading Australian wine writer James Halliday.