As shoppers and retailers do away with cash transactions, we may be witnessing the end of a major source of social and historical information – the coin.

In the modern age, coinage is increasingly seen as cumbersome, a vector for disease and costly to manufacture. Yet for more than 2,600 years, coins have faithfully preserved insights into human society through the eyes of the issuing state.

Coins reveal how rulers wanted their subjects to perceive their politics, their national identity and the social values they wanted to celebrate.

Russian novelist Ivan Turgenev wrote in 1861: “the drawing shows me at one glance what might be spread over ten pages in a book”. Nowhere is this more evident than on coinage, where words are limited.

Coins have always conveyed a message and, helpfully for historians, they are anchored to a specific time and place. Historian Harold Mattingly once called Roman coins the “newspapers of the day” – announcing new emperors, naming of heirs, proclaiming battle wins, holiday celebrations and events.

Read more: Museums are losing millions every week but they are already working hard to preserve coronavirus artefacts

Coins of the beleaguered Roman emperors of 69CE – during the Roman civil wars, when imperial reign was reckoned in months rather than years – depict imagery designed to bolster public confidence in the emperor of the moment.

Vitellius used imagery of the loyalty of the army. One example depicts clasped hands with the accompanying inscription FIDES EXERCITVVM (loyalty of the armies). The idea was far more aspirational than reflective of reality. That same year, Otho who reigned for 12 weeks, optimistically declared his VICTORIA (“victory”) and PAX ORBIS TERRARIUM (“worldwide peace”) on coins circulated during his fleeting reign.

Coins can offer detail where literary sources are lacking or incomplete. A large bronze sestertius (a denomination of Ancient Roman coin) that Titus had minted in 80-81CE, depicts not only external structures and statues but also intricate details of the Roman Colosseum interior. It also shows spectators, staircases, an imperial viewing box, and even depiction of the engineering mechanism for awning to provide shade. 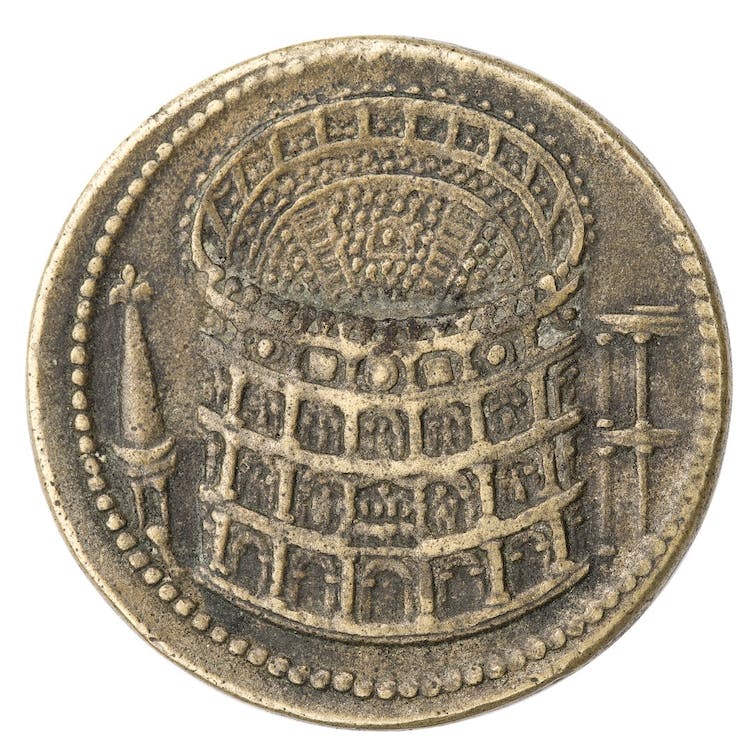 Ancient coins show that rivalry between cities is not new. In Ancient Rome, a city was honoured with the title neokoros (temple keeper) when permission was granted to build a temple to the emperor or imperial family.

The city of Ephesus was the first to be honoured with such a title during the reign of Nero (54-68CE). Cities vied to have neokoros on their coinage and in the ensuing centuries more than three dozen cities held the title, some multiple times over.

Militaristic exploits were a common theme celebrated on ancient coins. The brutal Roman response to uprising and unrest in Judea resulted in the destruction of the Jewish temple in 70CE. Many coins of the time depicting Judea Capta (Judea captured) were issued by the emperor Vespasian. His son Titus, whose sacking of Jerusalem as military commander was his sole claim to military glory, used coins to exaggerate the Jerusalem victory and secure his own line of succession.

Roman coins minted in the provinces away from Rome typically were inscribed with Greek rather than Latin. Rome may have conquered the Mediterranean politically by the first century CE, but Alexander’s spread of Hellenistic cultural and linguistic influences long outlived the collapse of his rule.

The linguistic components on coins help provide insight into the terminology used at the time. The word for city founder, ktisths, on coinage helps explain the term’s single appearance in the New Testament – though this has been traditionally translated as “creator” in modern English editions due to the similarity of ktisths to ktizw (meaning: to create).

The term’s use on coins makes it clear Peter the apostle was not referring to a cosmological creator but to a city founder and hence sustainer. When Peter writes to the marginalised and fledgling Christian community, he seeks to encourage them with an image of God as founder.

Even seemingly innocent imagery can reveal darker meaning. Pontius Pilate’s coinage for Judea showed a ladle (simpulum) and curved rod (lituus). These were commonly assumed to lack human representation out of respect for Jewish sensitivities. In fact, they were symbols of Greco-Roman pagan religion and imperial cult. This showed Pilate’s allegiance to Roman ideology rather than any Jewish sensitivities. 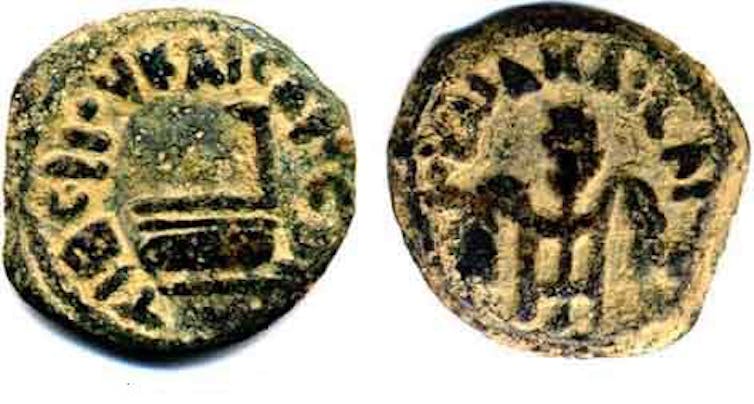 Imagery on older coins are very much current and still in use in modern coinage. The Athenian owl prominently displayed on the the tetradrachm coin from the 5th century BCE still features on recently issued 1 Euro coins.

The modern state of Israel sought to reverse Vespasian’s ancient war cry with a positive variation of the Judea Capta inscription. The new coin contrasts Judea Capta on one side with Israel Liberata on the other. 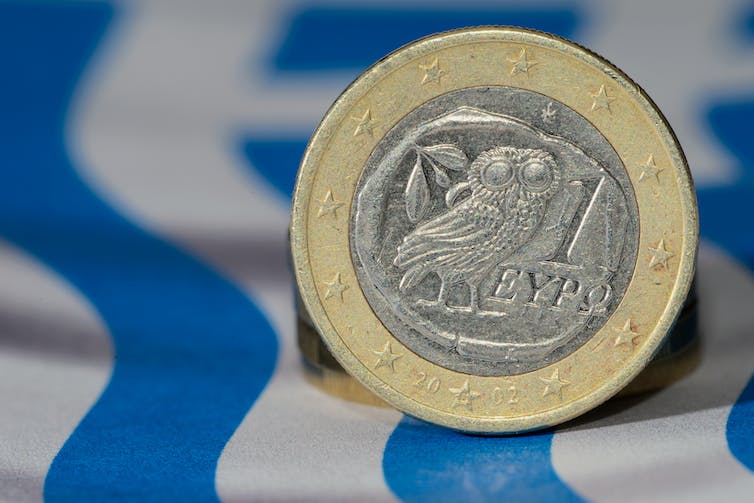 Money has taken various shapes and forms over human history. This includes feather money, cowrie shells, spade, boat and knife money. But it is the simple circular disk of stamped metal that has endured.

These small pieces of stamped metal have preserved insights into religion, community identity, monumentality, language and imperial power for thousands of years.

Future historians and archaeologists may find creative ways of mining cultural data out of our digital transactions, but for the time being, modern coinage continues the long human tradition of expression and national identity formation through state issued coinage.

Read more: The 14 Indigenous words for money on our new 50 cent coin