How would they bring the International Space Station back down to earth? Grace, age 7, Watson, ACT.

Hi Grace! The good news is we can bring the International Space Station back to Earth. The bad news is it will be a broken mess of melted metal. To understand why, we need to talk about a few other things first, including forces, orbits and gravity.

How did the ISS get to space in the first place?

The International Space Station (or ISS for short) is about as big as a football field. It’s too big to send into space in one go.

It took 37 trips with NASA’s space shuttle to carry all the pieces 350km above Earth – that’s about the same height as 3,850 football fields standing up on end. It took astronauts more than ten years to put it all together up in space!

Why doesn’t the ISS fall down to Earth?

To understand how the ISS stays up there, we need to know about forces.

You can’t see force, but you can feel it. Forces can make things move, and stop them moving.

There are two different forces keeping the ISS in place. The first is gravity. Things that are very heavy such as planets, make a force that pulls smaller things (such as you) towards them. The reason we don’t float into the sky (and the reason you fall down again when you jump into the air) is because Earth’s gravity is always pulling us onto the ground.

When astronauts go far away from Earth, they float because they have escaped the force of gravity. But why doesn’t gravity pull the ISS back to Earth?

To answer that, we have to know about another force called centrifugal force. When things move in a circle, centrifugal force pushes them to the outside of the circle. You may have felt this while riding on a roundabout at the park, or when you’re in a car going around a corner and you get squashed against the door. 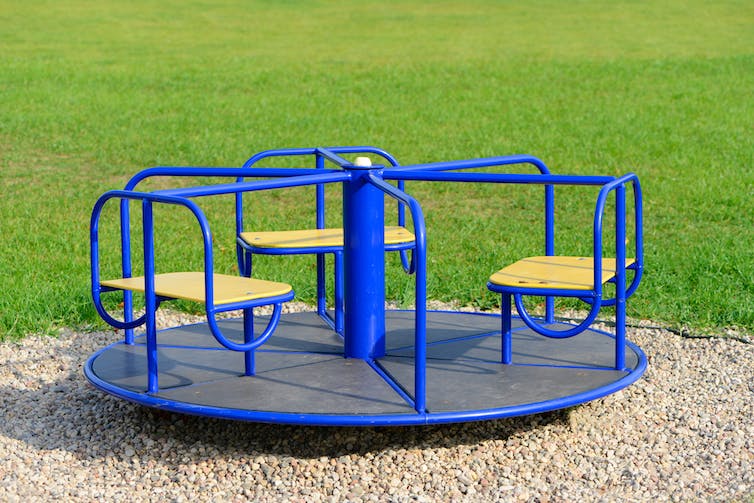 When you’re pushed back on a roundabout (or carousel) swing at the park, you’re feeling centrifugal force. Shutterstock

The ISS moves in a circle around Earth at just the right speed. The centrifugal force pushing it away is exactly the same as the force of gravity pulling it in. This balance is called a stable orbit. And unless something happens to change it, it will continue.

Can we bring the ISS back to Earth?

In terms of when the ISS will actually be returned to Earth, we’re not sure yet. But it’s likely this will happen after five years from now.

When astronauts return to Earth from the ISS, they come back in the same small capsule that took them there. It can fit three people and not much else. It’s nowhere near big enough to fit in the ISS, even if we broke it into pieces. So what will happen when we no longer use the ISS?

Some parts may be kept in space to be used again in a new space station. But most of the ISS will return to Earth. To do this, the mission controllers (the people who run the ISS) will use rockets attached to the station to drive it closer to Earth. When it’s close enough, gravity will start to pull it in.

Read more: Curious Kids: Where does the oxygen come from in the International Space Station, and why don’t they run out of air?

Eventually it will hit the atmosphere (the layer of air around the Earth) and burst into flames as it burns up. This is due to another force called friction, which happens when two things try to slide past each other really fast. Friction makes things hot.

Once the ISS passes the atmosphere, it will likely crash into an empty part of the Pacific ocean called the “Oceanic Pole of Inaccessability”. This is one of the emptiest places on Earth, between New Zealand and Antarctica. Other space stations, such as the Russian Mir space station are already there, four kilometres below the sea’s surface. 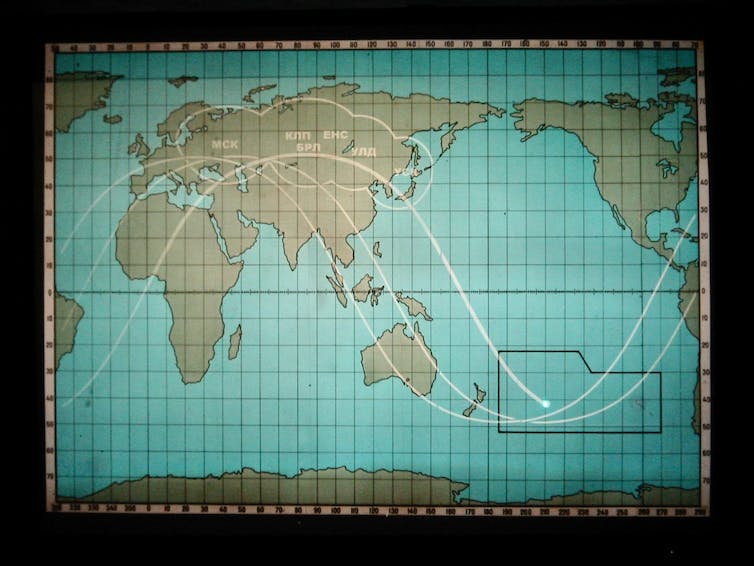 This large screen at the Russian Mission Control Centre for the Mir space station in Moscow shows the final orbits of Mir on March 23rd 2001, before it crashed into the ‘Oceanic Pole of Inaccessibility’ east of New Zealand. Author provided