Colonisation is invasion: a group of people taking over the land and imposing their own culture on Indigenous people.

Modern colonisation dates back to the Age of Discovery in the 15th century, as European nations sought to expand their influence and wealth. In the process, representatives of these countries claimed the land, ignoring the Indigenous people and erasing Indigenous sovereignty.

Laws and policing were significant tools of dispossession and oppression. Indigenous people were brutalised, exploited and often positioned as subhuman. As Jean-Paul Sartre described colonisation:

[…] you begin by occupying the country, then you take the land and exploit the former owners at starvation rates […] you finish up taking from the natives their very right to work.

Colonisation is more than physical. It is also cultural and psychological in determining whose knowledge is privileged. In this, colonisation not only impacts the first generation colonised but creates enduring issues.

Decolonisation seeks to reverse and remedy this through direct action and listening to the voices of First Nations people.

The word “decolonisation” was first coined by the German economist Moritz Julius Bonn in the 1930s to describe former colonies that achieved self-governance.

Many struggles for independence were armed and bloody. The Algerian War of Independence (1954- 1962) against the French was particularly brutal.

Read more: What Mandela and Fanon learned from Algeria's revolution in the 1950s

While the exiting of the British from India in 1947 is largely remembered as nonviolent resistance under Gandhi’s pacifist ethic, the campaign started in 1857 and was not without bloodshed.

The quest for independence is rarely peaceful.

Decolonisation is now used to talk about restorative justice through cultural, psychological and economic freedom.

In most countries where colonisers remain, Indigenous people still don’t hold significant positions of power or self-determination. These nations are termed “settler-colonial” countries – a term made popular in the 1990s by academic Patrick Wolfe, who said “invasion is a structure not an event”. 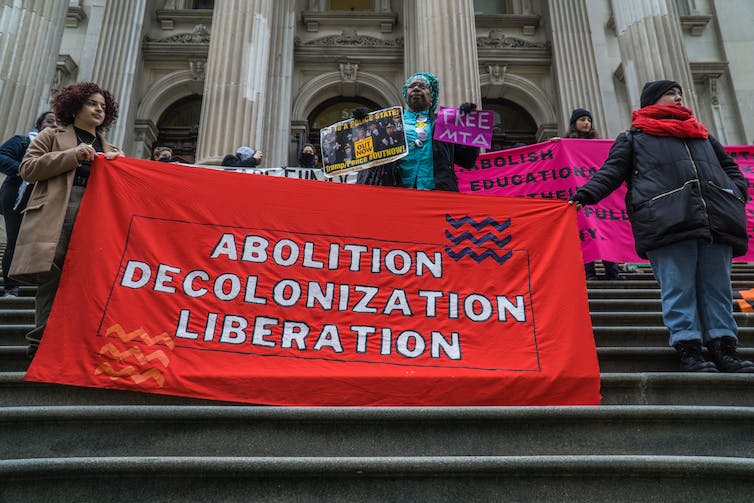 Another word that is useful in understanding decolonisation is “neocolonial”. It was coined by Kwame Nkrumah, Ghana’s first president, in the early 1960s to refer to the continuity of the former coloniser’s power through economic, political, educational and other informal means.

The Rights of Indigenous people was adopted by the United Nations in 2007. It says:

Indigenous peoples have the right to self-determination. By virtue of that right they freely determine their political status and freely pursue their economic, social and cultural development.

It lists several important rights in the process of decolonisation, including:

Read more: Who owns the bones? Human fossils shouldn't just belong to whoever digs them up

Decolonisation must involve challenging both conscious and subconscious racism. Non-Indigenous people in settler-colonial societies can start by asking:

To engage with decolonisation you can:

Read more: Explainer: what is systemic racism and institutional racism?

We might kneel to remember those murdered. But we need to call on institutions to enact required reforms for decolonisation. We need to support people in organisations who speak out against racism. We need to question whether colonisation taught us to stand, in institutional uniforms of the mind, and passively watch the choking.