This is the first of three articles based on newly released research on the impacts of a lack of local jobs on the rapidly growing Western Sydney region.

Western Sydney has a jobs problem. No other big regional economy in Australia fails in providing jobs for its residents more than this one. At the last census the Western Sydney jobs deficit – local jobs minus local workers – was 222,000.

If the region’s average rate of jobs growth for this century continues, this deficit will grow to 325,000 by 2036, an increase of over 30%. In our newly released reports on Western Sydney, we estimate an outflow from the region of 562,000 commuters as a consequence. Over 300,000 people already leave the region each day for work.

Read more: If the people can't get to their jobs, bring the jobs to the people

Young professionals will have a growing presence in this long-distance, grinding, daily flow of workers. It’s an urban planning nightmare. 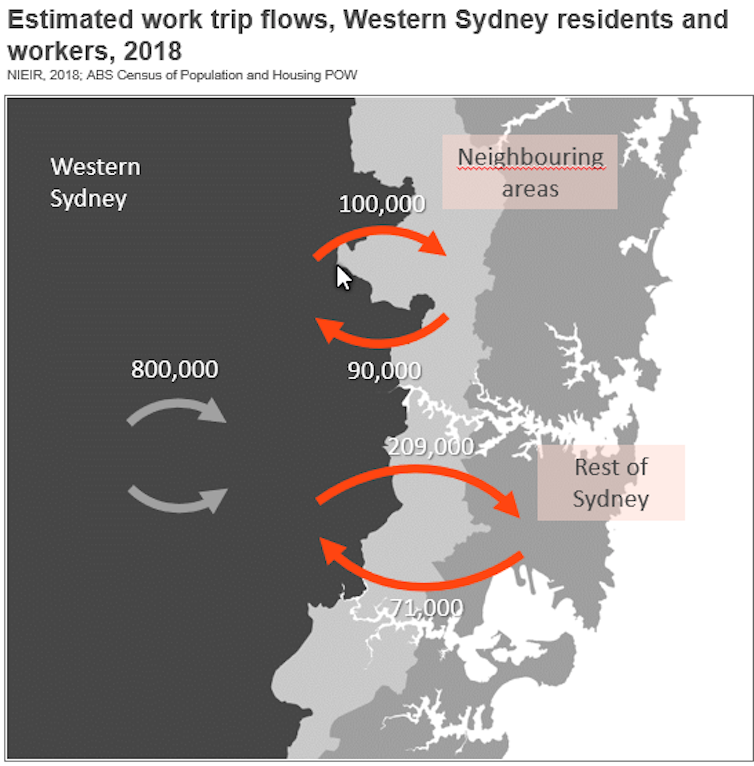 Centre for Western Sydney, Author provided Fifty years ago, Western Sydney was one of Australia’s major industrial regions. In 1971, a belt of four local government areas – stretching from Bankstown, through Fairfield and Parramatta to Blacktown – was home to 104,000 manufacturing workers, more than one-third of the local workforce. By 2016 the number of these workers had fallen by two-thirds to only 36,000, or 7.8% of local resident workers. Yet, unlike many manufacturing regions across the developed world – where de-industrialisation has left deep pools of displaced workers – the region hasn’t ended up a rust belt. Western Sydney’s workforce has undergone a remarkable intergenerational reconstruction. Education fuels rise of professional class University education, in particular, is driving this. In 1971, only 3,900 degree-holders lived in the old industrial belt described above. By 2016, their number had surged to 198,000. In the region as a whole, Western Sydney in 2016 was home to 353,000 adults with bachelor or higher degree qualifications. This was 20.7% of all people in the region aged 15 years plus, up from 10.7% in 2001. Clearly a transformative change in the region’s resident workers has been under way. 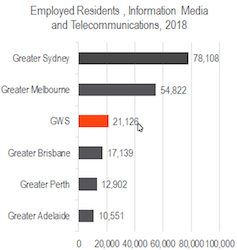 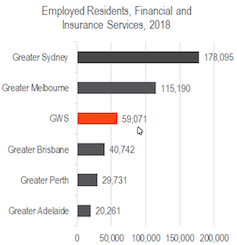 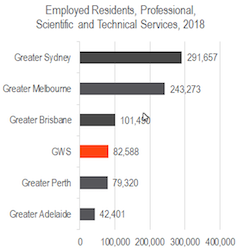 Click on charts to enlarge. Centre for Western Sydney. Data: National Economics (NIEIR), 2018, Author provided At the last census, 20% of Western Sydney’s employed residents were professionals, amounting to 203,000 workers. That’s more than any other occupational group in the region. We can also see the transformation of the Western Sydney workforce through its take-up of jobs in what has become known as “knowledge-based business services”. This term covers three industry groups: professional, scientific and technical services; financial and insurance services; and information, media and telecommunications. Here the emergence of the Western Sydney workforce as the real deal is undeniable. Our calculation is that, for 2018, Western Sydney was home to more knowledge-based business services workers (162,000) than Brisbane (159,000) – east-coast Australia’s wonder child – and significantly more than either Perth or Adelaide. Such is the pace of upskilling in Western Sydney, the growth from 2013-2018 of residents holding jobs in knowledge-based business services outpaced the growth of these job holders in Brisbane, Adelaide and Perth combined. Indeed, our report finds an emerging divide in Australia’s metropolitan economies. Greater Sydney, including Western Sydney, and Greater Melbourne are hurtling ahead as advanced knowledge economies. The other metropolitan regions are lagging. 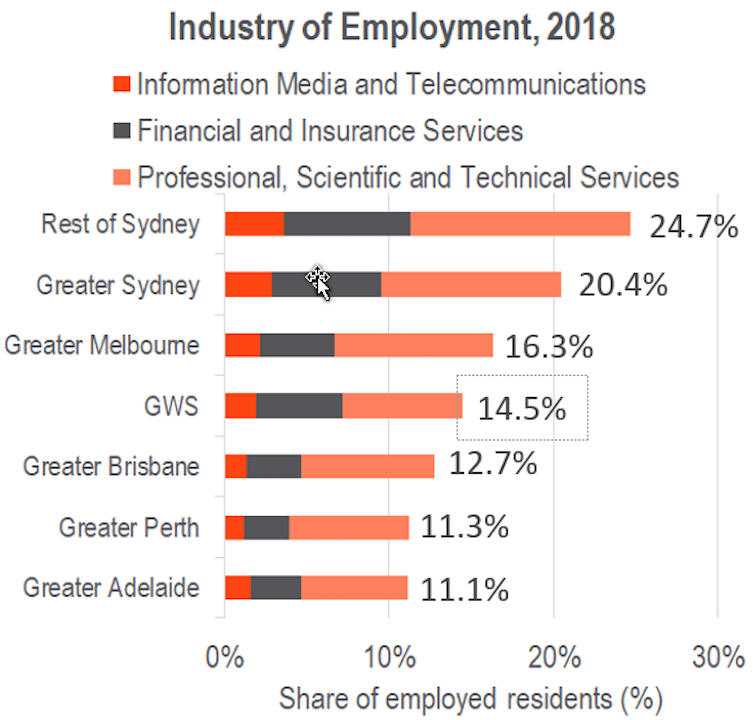 Centre for Western Sydney. Data:National Economics (NIEIR), 2018, Author provided But 60% don’t work locally A key question, then, is whether there are enough jobs in Western Sydney for this growing number of professional and knowledge workers? The answer, clearly, is no. At the 2016 census only 40.4% of Western Sydney’s knowledge-based business services workers could find jobs in their home region. The remaining 59.6% are forced to commute to destinations beyond the region to ply their 21st-century trades. Read more: Australian city workers' average commute has blown out to 66 minutes a day. How does yours compare? Western Sydney’s dependence on a population-growth economy has limited the growth of jobs for knowledge workers. The region’s strong jobs growth in recent years has come overwhelmingly from two sources. Construction, especially residential construction, has generated a lot of jobs. The other source of jobs is the industry sectors that have grown in direct proportion to population growth. These include health care and social assistance, education and training, retailing, and accommodation and food services. The region’s population growth has fuelled growth in these population-serving sectors. 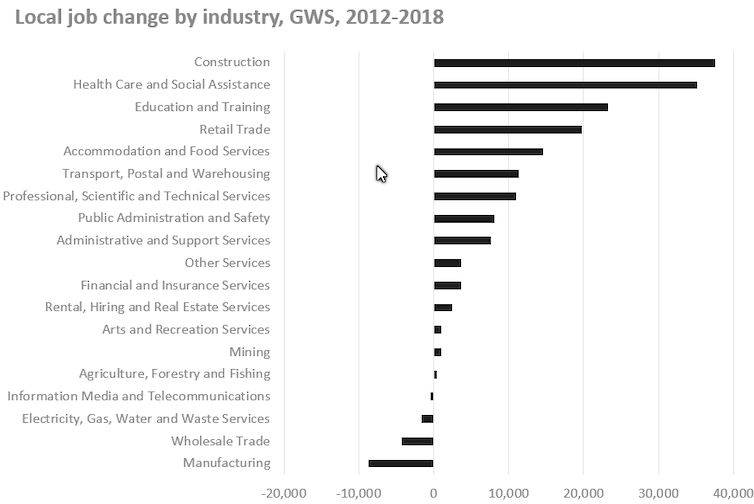 Centre for Western Sydney, Author provided Vulnerable in the downturn Obviously, this jobs growth has been welcome and is important for the region’s day-to-day economy. The problem is that the Western Sydney economy has failed to produce significant job growth in other sectors. This has left the population-driven sectors, including construction, as the main source of growth. In the construction sector, however, bust follows every boom. The sector entered a significant downturn in 2019. In addition, the COVID-19 pandemic and recession are likely to rein in Western Sydney’s record population growth rates. This will hit jobs in the population-serving sectors, including further job losses in construction. So workforce transformation in Western Sydney is running ahead of the economic transformation needed to ensure a supply of suitable jobs in the region. Western Sydney has grown to become something more than a suburban appendage to the Sydney metropolitan area. Yet its 1 million workers lack the diverse jobs base reasonably expected of a large advanced urban economy. Little wonder Western Sydney’s reputation as a planning nightmare is growing. The Centre for Western Sydney has released three reports on Western Sydney’s growing jobs deficit. You can read the reports here.