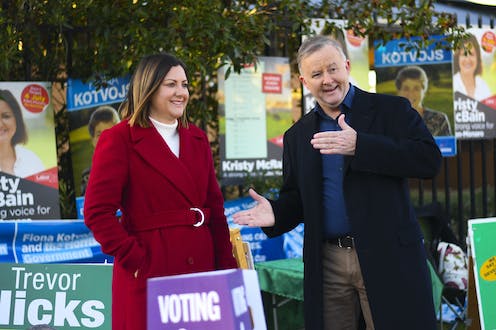 This article was updated July 5.

This page has all the numbers, including booth by booth results. The projected margin is an estimate of the margin once all votes are counted, not the current margin. McBain is given a 96% win probability. The two party projection would be a zero swing from the 2019 election.

While the Greens lost vote share, much of it went to Help End Marijuana Prohibition (HEMP), which won 2.4%. Labor also benefited from the “donkey vote” coming from the Shooters. The Shooters were first on the ballot paper, with Labor ahead of the Liberals.

In 2014, the Abbott government achieved a 1.2% two party swing in former PM Kevin Rudd’s seat of Griffith at a byelection. Had that swing occurred Saturday, the Liberals would have gained Eden-Monaro. In 90 federal byelections with a Labor vs non-Labor two party count, the average swing to the opposition is 4.7%, but it is just 1.1% in opposition-held seats.

Read more: Grattan on Friday: Saturday is crucial for Albanese but July 23 is more important for Morrison

Premiers still have high ratings, but Andrews falls in Victoria

In late April, Newspoll polled the ratings of the six premiers, and this exercise was repeated last week. Samples were 500-550 for the mainland states, and 311 in Tasmania.

Tasmanian Liberal Premier Peter Gutwein had the best ratings in the June premiers’ Newspoll, at 90% satisfied, 8% dissatisfied (net +82). His satisfaction rating overtook WA Labor Premier Mark McGowan in April (89%) as the best ever for a premier or PM in Australian polling history.

The biggest change in net approval was Victorian Labor Premier Daniel Andrews. His net approval fell 18 points to +40, with 67% satisfied and 27% dissatisfied. Andrews’s fall appears to be related to the recent spike in Victorian coronavirus cases, not the Adem Somyurek branch stacking affair. His net ratings on handling coronavirus fell sharply from +74 to +47.

Queensland Labor Premier Annastacia Palaszczuk continued to trail with a +24 net approval, though that was up eight points. 59% were satisfied and 35% dissatisfied. The Queensland election will be held in late October.

Scott Morrison had a +41 net approval in last Monday’s federal Newspoll. Palaszczuk trails Morrison, Andrews and Berejiklian are about level, Marshall is above him, and McGowan and Gutwein are far ahead.

A good US jobs report, but there’s a long way to go

The employment population ratio - the percentage of eligible Americans that are employed - rose 1.8% in June to 54.6%. But at the lowest point of the recovery from the global financial crisis, the employment ratio was 58.2%.

The surveys used for the jobs report were conducted in mid-June, before the recent spike in US coronavirus cases, which peaked at over 57,000 on Thursday. This new spike may derail an economic recovery.