Spoiler alert: this story details how The War of the Worlds ends.

The latest screen adaption of H. G. Wells’ 1898 modern masterwork The War of the Worlds will hit our screens this week. Continuously in print since its first publication, the book is a literary gift that keeps on giving for producers and screenwriters. They recognise the story’s unerring capacity to find its mark with each generation.

Wells – who also wrote The Time Machine (1895) and The Invisible Man (1897) – helped pioneer the science fiction genre when he conceived this astonishing book. With an eyewitness narration that reads grippingly still, it tells of a Martian invasion of Earth.

Set in London, Wells depicts a complacent world; of men “serene in their assurance” of their dominion over the planet. But humans get the shock of another reality when suddenly visited upon by blood-feeding and squid-like creatures possessed of “intellects vast and cool” that are “unsympathetic” to Earthlings whose planet they had long “regarded with envious eyes”. 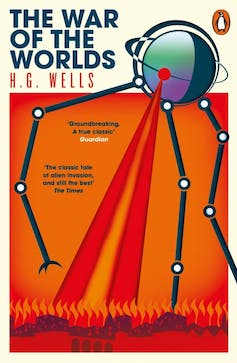 Penguin An advance party arrives inside metal cylinders shot from giant cannons stationed on Mars. From the cylinders come dozens of Martians, each operating a three-legged metal “fighting-machine” that attacks London’s helpless population by means of a “heat ray”. From these “whatever is combustible flashes into flame”, metal liquifies, glass melts and water “explodes into steam”. Fleeing like rats from a burning ship, panic spreads like a contagion. The narrator describes a breakdown of law and order, and undergoes something of a breakdown himself. Upper-class women arm themselves as they cross the country, because traditional deference has gone up in smoke. The “social body” of organisation – police, army, government – suffers “swift liquefaction”. The Martians, however, had become too intelligent for their own good. They had made the Red Planet disease-free but forgotten about germ theory. And so while laying waste to London, they inhale a bug; a simple bacteria “against which their systems were unprepared” and so suffered a “death that must have seemed to them as incomprehensible as any death could be”. London will rise again. The world has been spared. Humanity gets lucky — this time. Read more: Science fiction helps us deal with science fact: a lesson from Terminator's killer robots A wider war In the new Anglo-French television series, La Guerre Des Mondes, the action takes place in both London and France. Martian devastation is given wider latitude. Why does this now-familiar story have such a hold on successive generations? Iterations include the Orson Welles’ radio broadcast of “fake news” bulletins about Martian invasion, to the 1978 contemporary music version with Richard Burton narration, to Steven Spielberg’s film blockbuster starring Tom Cruise. Last year also saw a BBC production set in Edwardian London. 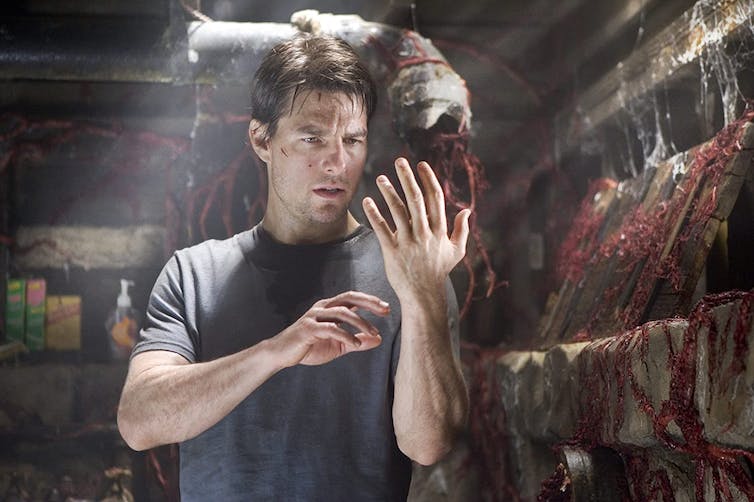 Tom Cruise and the red weed in the 2005 film. IMDB One response is to consider our attraction to sci-fi. It sees the laws of science upended. Technology seems to make anything possible and to minds already accustomed to real technological transformation, sci-fi literature brings the now-thinkable future into the present. But there’re less obvious elements to think about: themes that were important in 1898 and resonate still. Invasion and imperialism Wells’ book touched something existentially British during their Pax Britannica period of relative peace. Across the Channel, Europe seethed with diplomatic intrigue and tensions culminating in the first world war. The new sci-fi genre connected to an older “invasion literature” genre; a long-standing British apprehension of the Continent, especially its renascent German threat. Wells hints at this when he writes that the arrival of the cylinders (before the Martians emerged from them) “did not [initially] make the sensation that an ultimatum to Germany would have done”. Then there’s the imperialism angle. Was Wells tapping a source of late-Victorian shame at the true source of British wealth and power? Then, a quarter of the world map was coloured British Empire pink. London was the epicentre of modern imperialism — the coordination point for the suffering of millions and the plunder of their lands. Moreover, Belgium, Germany, France, and also the USA, were engaged in the “scramble for colonies” in Africa and Asia. Under the veneer of sci-fi, Wells describes what it’s like to be a people facing a powerful invader. A BBC version was set in Edwardian times.Fear is the contagion A very different perspective says something about our species and our idealised self-conception. In 1908 the Russian novelist and revolutionary Alexander Bogdanov, drew on WOTW for inspiration. In his novel Red Star protagonist Leonid travels to Mars to learn about communism from Martians who had made their own revolution and now lived in peace. Leonid despairs of the congenitally “unstable and fragile” nature of human relationships and looks to another planet for guidance. The Earth-bound communist project of the 20th century ended badly, to say the least. But our human vulnerability to invasion, to tyranny, to economic catastrophe, and even to the bacteriological danger from microbes resistant to antibiotics, continues to haunt us. The latest adaptation is set in our time with smartphones and the internet. Here again our 21st-century complacency is shattered, and our vulnerability laid bare. Fear is a contagion in WOTW, and its Londoners show little heroism in the face of an alien invader. Read more: Science fiction builds mental resiliency in young readers A new battle Bacteria did in Wells’ Martians and might do for us too – unless drugs to overcome resistance are developed. Through sci-fi, we can explore our fear of the invisible foe. Global warming might be our other enemy – the red skies of Australia’s last bushfire season fresh in our memory and reminiscent of Well’s novel. Jeff Wayne created the progressive musical version of The War of the Worlds, featuring Justin Hayward (The Moody Blues), Chris Thompson (Manfred Mann’s Earth Band), Phil Lynott (Thin Lizzy), Julie Covington and David Essex.The narrative provides a hugely enjoyable fantasy. But we need to think about what science fiction might be doing to our relationship with science fact, especially if we consume it as a tranquilliser to displace and sublimate our fears of invisible threats. If we do, then the incomprehensibility felt by Wells’ Martians may add that little bit more to our discord regarding the sources and solutions to global warming. Humans got lucky in The War of the Worlds. They didn’t need to do anything to survive. We can’t count on luck to save us or our planet. War of the Worlds double episode will premiere July 9 on SBS and continue weekly from July 16. Episodes will be available on SBS On Demand on the same day as broadcast.